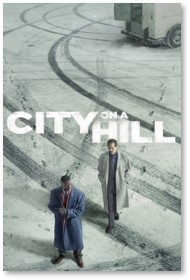 I love watching TV shows and movies that are set in Boston. It’s fun to see familiar scenes appear in unusual circumstances and big stars walking where I have walked—although not at the same time. Plus, I enjoy seeing how they glitz up the city, making everything look clean and spiffy.

As I mentioned before with Ray Donovan, characters often move from one place to another in ways that don’t make sense in the real world. Watching that is like putting together a moving jigsaw puzzle.

City on a Hill Season 3

Currently, my husband and I are watching Season 3 of City on a Hill, Showtime’s gritty crime drama that stars Kevin Bacon and Aldis Hodge. When it comes to its location shots, this series started off well. We watch the two stars having drinks at the Omni Parker House’s bar, The Last Hurrah, while snow falls on King’s Chapel outside. 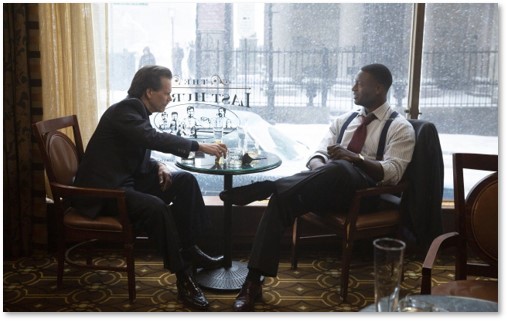 Drinks at The Last Hurrah

Other locations in that series opener included Chelsea, Lynn, Medford, Newton, Quincy, and Revere. Season Two featured the Massachusetts State House with exterior shots in Chinatown and the Financial District.

So far, so good. On to Season Three. 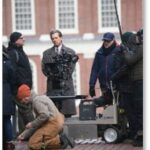 On location at Faneuil Hall

The show takes place in the 1990s, when the Big Dig was still underway, and I hoped this meant it would be filmed with authentic locations and backgrounds. Silly me. Turns out that they shoot mostly in New York City. Much of City on a Hill uses locations that range from Steiner Studios in Brooklyn and Staten Island to White Plains, New Rochelle and the Bronx.

The executive producers are Ben Affleck and Matt Damon, who know their way around Boston. Plus, the show’s creator and executive producer Chuck MacLean, and actors Jonathan Tucker and Kevin Chapman, grew up in the area during that time period. The question thus arises of why the Big Apple stands in for the original city on a hill.

Location manager Ryan Cook explained that depicting the period accurately in exterior shots presented a problem because of how much the city has changed since the nineties. And for the better, I must add.

In Boston.com, Mr. Cook explained, “’Even between the time when I did ‘Black Mass’ and now, everything has changed,’ referring to the 2015 Whitey Bulger biopic starring Johnny Depp. ‘Change is good, and development can be good, but it’s definitely not 1992 Boston anymore.’”

Not the City on a Hill Anymore

Okay, got it. Plus, you can build a generic apartment, Irish bar, government office, and other interior locations inside a sound stage and make them both historically and architecturally accurate. Outside is a different story. Boston today has too many gleaming glass-walled towers for the nineties.

Also, I have no quibble with going to NYC to find locations that are as gritty and grimy as Boston used to be in 1992. The Big Apple is, after all, a helluva town.

What makes me sit up, though, is when the exterior shots are just plain wrong. Here are two examples.

Not since Agents Scully and Mulder drove along a level road through an industrial park while proclaiming they were on Beacon Hill have I seen such a, well, flat representation of this iconic neighborhood. 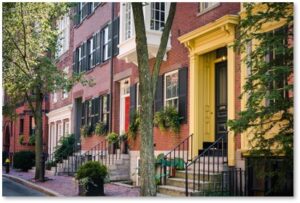 When Kevin Bacon’s corrupt FBI Agent, Jackie Rohr, goes to work for a wealthy man (Corbin Bernsen) on Beacon Hill, I sat up and took notice. Did they film it on location? Would it look authentic?

Most of the show’s NYC exterior shots are ordinary street scenes and lacking in any distinction but surely this could not be the case here. I mean, it’s hard to make Beacon Hill look like Manhattan—and vice versa.

The first view of the house’s front door makes it difficult to tell. It’s a brownstone that could be on Beacon Street in the Back Bay. Maybe. But the next shot, which includes more of the street makes it clear this house occupies what I tag as Manhattan’s West Seventies. Which is a very level part of the city—no hills in sight.

But wait, there’s more. Jackie agrees to drive the boss’s daughter to Logan Airport. Actually, this involves the two characters sitting in a limo’s back seat while the chauffeur drives. But what intrigued me was the wooded scenery flashing by outside the windows. Woods? Between Beacon Hill and Logan Airport? 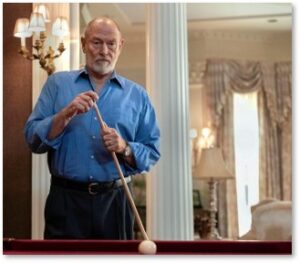 You can reach the airport from the city via the Callahan Tunnel, the Ted Williams Tunnel or the Tobin/Mystic River Bridge. No woods grow anywhere along those routes. So, who decided they needed woods on the way to Terminal E? (She’s going to London.)

BTW: the word “hill” implies a slope with streets that run up and down. (Well, there is Beacon Hill Flat, a local oxymoron for a neighborhood that was once part of the Charles River.) But the show is called City on a Hill, so I don’t think it’s asking too much to put a hill in there somewhere.

The Game of Zones

I can’t wait to see more episodes. They try to fool me with tight camera angles and bland locations while I try to figure out where they really are. I use this game to lighten the dark story lines in City on a Hill.

In addition, I can always look forward to the last episode of the season. The first and last episodes typically have some real local color. Maybe this season will even include a hill.