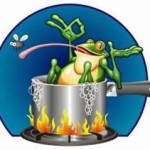 Sometimes culture changes so drastically that people, like the frog in the kettle, adjust to the new reality and forget what things used to be like.  Even when we actually experienced the old reality, we allow it to recede into the past so we can focus on our daily lives. And sometimes we have to face up to the reality that, sadly, some things haven’t changed much at all.

In the latter category, we can compare two articles on sexist advertising.  The first is from Adweek: “The 10 Most Sexist Ads of 2013” In it we see some persistent, offensive themes that appear in advertising year after year, especially during the Super Bowl. They show up whenever the target audience is young men and the ad agency is trying to get their attention in the most crass, obvious (but essentially uncreative) way: 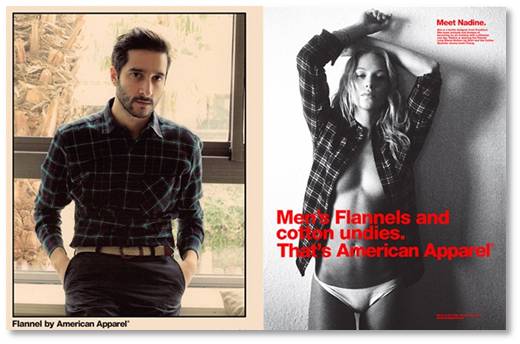 Unnamed and fully clothed man wears flannel shirt in the tropics (palm tree outside) while woman with a sexy name is half naked to sell a man’s shirt.

But wait, there is some good news.  The ads don’t actually state this as baldly as they used to back in the sixties. They just make the message subliminal by showing it and trusting our brains to translate.

Ads From the Mad Men

The biggest difference between now and the sixties is that we notice sexist ads for what they are and don’t hesitate to protest their ignorant, bigoted depiction of women. Back then, we just accepted the messages as the way things were—at least until the Women’s Movement shook everything up.

I’m often amused when I see memes on Facebook about how great life was in the fifties and sixties. It was certainly a simpler time when many things were clearly defined—and either rewarded or punished.  Expectations were openly stated and everyone knew the cultural norms. But some of that rose-colored simplicity and clarity come from the fact that we were kids then, with a view of the world that was appropriate for children. Our parents didn’t talk about bad stuff in front of the kids and much of what is now out in the open was hidden from us.  As children, we didn’t see a lot of the complexity—or the evil—that truly existed in the world. If you were white, Christian, male and heterosexual in the fifties and sixties, the world was your oyster. If you were not all of those things, you were likely to encounter some problems.

Now take a look at this article from Business Insider, “26 Sexist Ads of the ‘Mad Men’ Era That Companies Wish We’d Forget,” by Harrison Jacobs and Jim Edwards.  There’s nothing subliminal in these advertisements: the messages are stated and shown clearly and bluntly. I’ve put them into categories, although some ads fit into more than one: 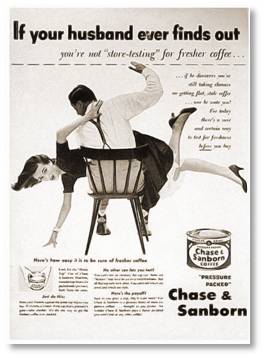 Time to switch to decaf 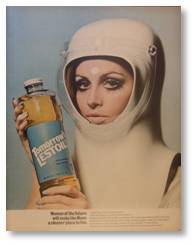 Well someone has to clean the moon

I’m not sure how the writers missed the National Airlines campaign that showed pictures of flight attendants—then known as stewardesses—with headlines like “I’m Laura. Fly me nonstop to Miami.”  But those ads appeared regularly.

I think the biggest difference in sexist ads then and now is that ads in the sixties focused on women as stupid, weak domestic servants while ads today highlight nudity, sexuality, and brutality.  Which is better?  Well, neither.

Perhaps someday we’ll see an end to this puerile, insecure and immature approach to advertising. Perhaps one day a savvy creative director will know enough to put these ideas where they belong—in the garbage cans—before the client ever sees them. Perhaps someday more clients will recognize this kind of advertising for what it truly is: insulting to the reader or viewer, destructive of the company’s brand, and unlikely to increase sales. I made just this call several times when I ran advertising for technology companies and I had some intense discussions with the agencies when I did so.

In the meantime, when you see a sexist ad just make a note not to buy the product. Companies pay for advertising to increase sales. If sales drop, the campaign goes out the window—even when a woman didn’t wash the window first.