You’re in line at the checkout register when you notice people in front of you being asked to make a charitable donation as they pay for their merchandise. “Would you like to make a donation?” requires a yes or no answer and puts you on the spot.  Welcome to the Charity Checkout Trap. It’s an uncomfortable place to be. Sometimes a specific amount is requested and sometimes cashiers simply wait for your answer and a dollar amount. One store even rings a bell when a customer donates.

This concept isn’t new; checkout charity is a big business for non-profits and retailers. It’s become commonplace at grocery stores, drug stores and department stores. Mass merchandisers and big box stores like Costco, Walmart and Target do it all the time. Fast food restaurants and even pet stores have jumped on the bandwagon and on-line retailer Amazon invites customers to donate 0.5 percent of their purchases to their favorite charity with AmazonSmile.

Charities love it because it raises money with minimal cost. Companies love it because it makes them look compassionate and generous, even if it comes on the backs of their customers. Checkout charity incorporates a variety of tactics, from direct solicitations at the register to purchasing a colored ribbon, running shoe or shamrock to hang in their window. JC Penney asked customers to round up their purchase to the next dollar for their After School Round-up. The individual consumer saw a few pennies added to their bill but collectively they raised $10.4 million in six months.

Go Where the Money Is

William “Willie” Sutton robbed banks. In forty years he stole over $2 million dollars and spent half his life in prison. When asked why he robbed banks he replied, “That’s where the money is.”  Like Willie, retailers and charities have this ambush down cold. They catch you off guard while you are shopping and hope you’ll hand it over. Most of us do, motivated by guilt and the desire to quickly move on. 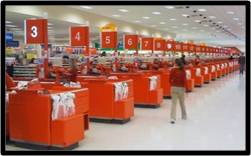 Point-of-sale giving is easy to execute. Stores get the benefit of social responsibility without any investment or real skin in the game. One way to put some respect behind this mass solicitation is for the retailer to match donations dollar for dollar. If supermarkets promoted buy-one-donate-one to a local food pantry or pet stores did the same with dog food customers might be more inclined to act.

If there is a benefit, it’s that stores generally don’t take a cut of checkout campaigns or charge a fee to the charity. In some cases, charities might pay a retailer a monthly fee to put a donation box at the register to give stores incentive to keep donations active.

Solicitation is heightened during holiday seasons, a strategic opportunity not lost on charities as people are inclined to be more rushed and more generous.

The very nature of checkout campaigns preys on our worst instincts. We make snap decisions under pressure without doing the research on the charity or how it’s being managed. Not all charities are equal and not all giving is transparent.

Personal giving should be intentional, focusing on a cause we care about and supporting organizations we personally believe in. Check-out giving is opportunistic for the store, catching you with your wallet open and credit card out. From their perspective you’re half way there.

The charity wins big short term, but there is limited long-term gain. They get no information on the donor and are unable to make follow-up requests—a key to continued charitable giving. 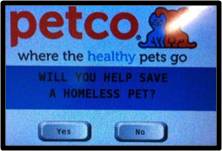 As these types of requests become more common, people may feel even less inclined to give. It doesn’t make us like the retailer better, drive sales or teach us anything about the charity’s work. In fact, shoppers can become resentful of the retailers for putting them in an uncomfortable position.

Joe Waters, who founded selfishgiving.com, a Boston-based website about nonprofit and corporate partnerships, said point-of-sale fundraisers are here to stay but will be forced to change as consumers grow weary of them. He expects to see incentives, such as discounts or campaigns tied to credit card machines like PetSmart, asking shoppers to donate to homeless pets when they swipe a credit card.

To date, check-out charities have taken in more than $2.3 billion dollars.

I believe in charitable giving, but I’m not a fan of this method. It feels like I’ve been cornered at the checkout with people listening to see if I am heartless enough to refuse a donation to cancer research, wounded veterans and starving puppies.  On occasion I will say yes—I am a sucker for a veteran selling poppies—but I have also learned to say no without apology and walk away.

Americans don’t lack for opportunities to donate to charities. Requests are solicited by telephone, email, social media, mail, and even door-to-door. Why not where we shop?

The more we agree to give at the checkout, the more we will be solicited at the checkout. Stores and charities copy each other, especially when they see how well it works. If you don’t want to be continually asked for donations you have to start declining. There is no shame in saying no.

It doesn’t mean you’re a bad person, and the people behind you aren’t going to think less of you.  In fact they might just feel the same way.