Driving home on Wednesday from a friends-and-family get together, I witnessed a motorcycle accident. Many times I have watched a reckless driver tempt fate and expected tragedy to ensue only to be relieved when it didn’t happen. This time it did.

I was in the middle lane on an interstate highway, keeping up with the flow of early rush-hour traffic at around 60 miles per hour. With several car-lengths between the driver in front and good spacing with the car behind, everything seemed pretty ordinary.

Suddenly a motorcycle roared up behind me, either in the right lane or between the lanes. His bike was so loud, and it appeared so quickly, that it startled me. The biker went by me like my car was standing still. He swung into the space between me and car in front, then out into the passing lane. 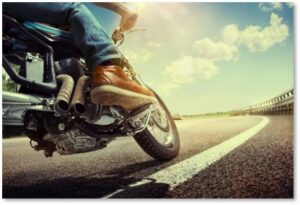 There, the  biker passed two cars, then wove back into the middle lane and out into the right lane again, all without slowing down. Immediately, unbelievably, he peeled off onto an exit ramp.

I watched, aghast. The biker was doing at least 80, far too fast, I thought, for the ramp’s curve. I never took physics in high school but even I know about centrifugal force and could tell this was not going to end well.

Sure enough, the motorcycle’s wheels slid out and the bike went over. The bike hit the asphalt and flipped, flinging the driver into the bushes alongside the ramp. The bike rolled several times and fell—right on top of where the driver had landed.

Doing the Next Best Thing

I wanted to stop—not that I am a medical professional or would have had the faintest idea what to do—but a solid line of cars in the right lane blocked me. So, I did the next best thing. I punched up my phone and dialed 911.

Reaching the local police dispatcher, I described the accident. I gave him the number of the exit ramp and the details. When he was certain the bike had flipped on an interstate highway ramp, he patched me through to the State Police.

That trooper listened very carefully and got all the details straight. Then he said, “We’ll send someone to check it out.” From what I had seen, the situation required something more drastic than checking out. I replied, “You’re going to need an ambulance.” He thanked me and hung up.

I continued on my way but the accident kept playing in my head—mostly because it had been completely avoidable. Had the driver (A) stayed in the right lane instead of weaving through traffic, and (B) slowed down for the exit ramp, he would have arrived home safely.

Safety did not seem to have been the issue here, however. Otherwise, he would not have been driving with such speed and reckless abandon. What was the issue?

Was he in a hurry to get home?
Was he late for something important?
Did he need to push the motorcycle to its limit?
Was he just showing off?

Because what I had seen haunted me, I did try to find out what had happened. The next day I checked the Boston Globe and discovered there had been four (4!) motorcycle accidents that day, one of them fatal. None was the one I had witnessed.

I went further, with a trip to library to check police logs in the regional daily newspaper and the town newspaper. No record. I called the local police department and they told me that when they arrived both the rider and the bike were gone. That means he must have survived and been uninjured enough to leave on his own power.

I have never ridden on a motorcycle but I know the Emergency Room doctors call them “donor cycles.” I also know people who have been very badly injured in motorcycle accidents. 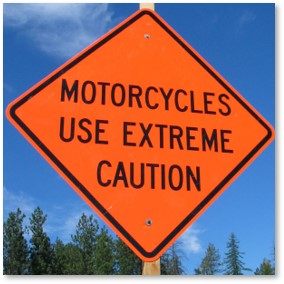 Motorcycles are dangerous because (A) you don’t have a steel cage, seatbelts, or an airbag protecting you; (B) other drivers don’t always see motorcycles because they or looking out for the boxy shape of a car or truck; and (C) they are more susceptible to road hazards like wet pavement, sand, or potholes.

For these reasons, and more, deaths in motorcycle accidents are approximately 30 times higher than fatalities in car accidents. One would think this would mandate a more conservative driving style among bikers. Unfortunately, when you combine young men (he looked young), speed, maneuverability, and an attitude of invincibility with a dangerous machine, you often get a ticket to the ER—or the morgue.

And that’s what haunted me. I thought this young man’s family was going to spend their Wednesday night either in a hospital vigil or coming to grips with his sudden and inexplicable death. That would be followed by a protracted rehabilitation and enormous medical bills or a tragic funeral. All for no reason, nothing. The rider was careless, reckless, and clueless about what happens on a curve at high speed.

I saw it happen and I did what I could. We are all, I think, called upon to do the same.  Somehow, against all logic, the driver emerged from this okay. I hope he learned a lesson from the accident. .

I wish him well.

1 thought on “Witnessing a Motorcycle Accident”