I’m delighted to report that an anthology containing one of my short stories was published yesterday and is available for purchase online. Ghosts: An Anthology of Horror from the Beyond edited by David Tyson contains fourteen “dark and disturbing” tales including my short story, “The Broadcast Circle.” Editor Tyson says that, “With over 64,000 words that will chill your bone and keep you up all night, this anthology brings horror to a new level.” 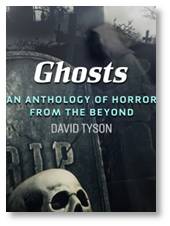 David Tyson is the author of The Fifth Age: Book I: The Quest for the Stone of Power and other short stories. He is a writer of all genres, including fantasy and horror. When he is not busy with his job he writes and plans to continue releasing books and short stories.

Here’s the full table of contents:

I’m thrilled to have one of my stories included in this anthology and to be part of such an outstanding group of authors. “The Broadcast Circle” is about a woman driving home after a stressful week when she encounters someone who forces her to acknowledge a talent she has hidden for many years and solve a mystery at the same time. Here’s how it begins:

“I was driving fast down the twisty back road, trying to get home before midnight, when the woman ran out of the darkening woods and into my headlights. Abandoning the gridlocked highway, I’d taken an impulsive shortcut onto this narrow road and was driving much faster than its twists and turns would allow.  The high beams gave me only a flash impression—an instantaneous image. She was dark-skinned but washed out, like in a black and white photo. Under a mop of wet dreadlocks, her eyes were wide with shock, her mouth open in a scream—or a cry for help.  Her white shirt clung to her arms and chest. Staring straight at me, the woman raised both hands to ward off the impact.

“I hit her while standing on the brakes.

“When my car finally shimmied to a halt a hundred feet down the road, I sat for a few seconds, trying to breathe.  My hands shook on the wheel and my brain raced in panic, telling me to just keep on driving: no one would ever know.  But I had hit someone—I may have killed her—and I had to know.

“I had already unbuckled my seatbelt, flung the door open, and gotten of the car when I realized that it might be a stupid thing to do.  I had read more than a few Internet warnings about scams that get women to stop on a lonely road where they became easy prey.  Except for my car, though, the road was empty.”

To find out who she hit and why—along with what happens next—you can purchase Ghosts: An Anthology of Horror from the Beyond online. The book is available exclusively on Amazon.com for two weeks and then can be purchased through other outlets. I’ll update you when that happens. Here are the links:

Should you live locally, I’ll be happy to personalize your book by signing it. I live in Massachusetts. Just let me know if you’d like to meet and I’ll come with pen in hand. Also, please feel free to forward this post to friends and family: I really want to help make this book a success so it will go into full print publication and more stories will follow.