i carry your heart (i carry it in my heart) ~ e.e. cummings 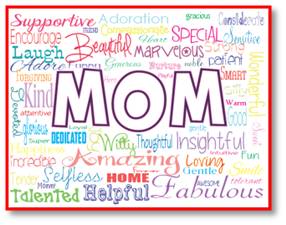 She was a one-of-a-kind mom and a force to be reckoned with. Other kid’s moms had backbones made from the usual stuff but my mom’s was made of solid steel. It did not break and it almost never bent. She was a one-of-a kind Mom who was the CEO, Treasurer, and Human Resource Manager of our family. She made sure we grew up to be self-sufficient, ingenious and curious human beings.

Mom was born into the depression with a future defined by her own initiative and resourcefulness. Her dreams led to a career as an Army combat nurse in World War II and the Korean War. She saw things no one should see and for better or worse it shaped her into the woman who became my mom. She had led an unusual and interesting life by the time I arrived; influencing her parenting style and my upbringing.

The Lady of the House

She ruled with an iron hand and commanded our attention. While my Dad did not suffer fools gladly, Mom did not suffer them at all. She was the disciplinarian and dispensed justice without pity. When her mind was made up it stayed that way. Even when she was wrong she was right! She was our very own Judge Judy but called her Helen. No one ever committed the same crime twice in her court room.

Helen had Super Powers that included mind reading, X-ray vision and supersonic hearing. Her ability to hear an eyeball roll behind a closed door and detect a lie—even a little white lie—was legend. Attempts to circumvent her expertise failed miserably. You always knew where you stood with her.

My Mom went to college—quite an accomplishment for a woman in the 1940s. She graduated with a degree in nursing and reported for duty as a newly commissioned Second LieutenantLt at Fort Ord California. Not long afterward she found herself on her way to World War II.

The Army Nurse Corps listed fewer than 1,000 nurses on its rolls in December of 1941. Six months after the Japanese bombed Pearl Harbor, there were 12,000 nurses on duty with the majority of them unfamiliar with military protocol. The Army created a six-week training program to indoctrinate them in field sanitation; air, chemical, and mechanized attacks; military requisitions and communications. When the war ended, 150,000 nurses were combat trained, much of it on the job. She had a brief respite in Tokyo before being sent to one of the newly established M.A.S.H units in Korea.

Is There a Doctor in the House?

Serving in a field army hospital made my mother a triage expert. She instinctively knew when something was wrong and what to do. She saved my sister’s life when she choked on a Life Saver, drove me to the hospital and demanded a surgeon because she knew I had a ruptured appendix (I did) and saved a classmate’s life when she diagnosed alcohol poisoning. I saw her perform CPR on a neighbor’s husband and stood in awe when she suspected the lung cancer that claimed her life.

Helen would have made a great doctor. She kept her knowledge current through medical subscriptions and the latest reference books. In our house we had Grey’s Anatomy and The Physician’s Desk Reference where other moms had cookbooks. When we were kids she kept a stethoscope in the bathroom, an injection syringe in the kitchen cupboard and penicillin in the refrigerator. She knew how to use all three.

Mom had a sixth sense about people. She could detect insincerity and deceit, but also goodness and compassion. She approved of the man I chose to be my husband with the words “hang on to him, he’s a keeper” and to the man himself “good luck to you, you’ll need it.”

I admired her tenacity and ability to stare down a difficult situation. I never saw her cry, but felt her sadness and saw her kindness towards others. She was practical, pragmatic, and efficient. I inherited her resolve—some would say stubbornness –and her desire to embrace life.

My father’s influence was tangible and demanded action, but my mother’s life lessons came in the form of rhetorical questions. Mom was a master at asking a question wrapped around a judgment. She challenged me to look beyond myself, and I am forever grateful to her. Here are three of my favorites:

1. Where do you think you’re going dressed like that?
My mother was an impeccable dresser and valued first impressions. She understood the importance of quality, style and class. I never leave the house without a look in the full length mirror and her voice in my head.

2. Do you think I was born yesterday?
None of us could fool her (we all tried), but this was really about her expectation that you must never fool yourself or anyone else into thinking you are something or someone you’re not.

3. Who do you think you are?
I am certain this had its origin in situations where I pushed the proverbial envelope. Over time it became the genesis for a periodic self-evaluation of the person I was and the person I did not wish to become. I still ask myself this question and sometimes the answers surprise me.

If I had the opportunity to spend thirty minutes on a park bench with anyone it would be my mom. I would want her to know me today. I’d look at her and say “See, I was listening. You taught me well and I passed your wisdom down with exceptional results.”

Oh, and that eyeball roll thing… totally nailed it.