Ah, the romance of truffle hunting. A French farmer takes his pig on a leash into the forest to sniff out those prized black fungi hiding on the roots of oak trees. It’s romantic but not very effective. Also, it’s no longer done that way.

One of the side tours on our Viking River Cruise in the French wine country was to a truffle farm. We left Libourne in the early morning as the sun was just rising behind a curtain of mist. Driving through the French countryside, we passed churches and manor houses and drove through quaint villages. I could easily imagine the armies of France and England emerging from the fog to face each other once again in a battle that was fought for the hundred years after Eleanor of Aquitaine divorced Louis VII in 1152.

At the Truffle Farm 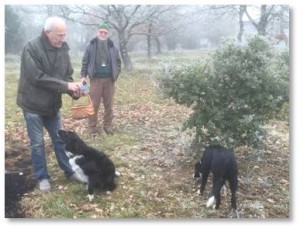 Hunting truffles with Edouard and Farah

We arrived at the truffle farm and were greeted by Edouard and his dog Farâh (accent on the last syllable.) Edouard and his family are the only residents of this small village in the Périgord region.

He took us out into his “orchard” of small quercus ilex trees—evergreen oak or holly oak—growing in neat rows. Her puppy, left behind in the farmyard, made his displeasure known.

Edouard showed us how to look for the brulée, or burnt area around the base of a tree, that indicated the presence of truffles. Then he told Farâh to “cherchez la” or search for truffles. 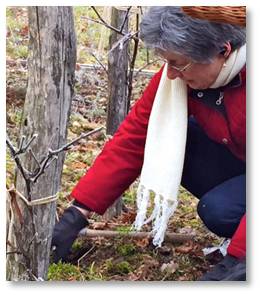 Digging up a truffle

The dog went at her task with a will and soon began digging. Edouard immediately pulled her away as she would otherwise destroy the truffles with her strong claws. He then scraped the area carefully with a small trowel until the black, golfball-sized fungus emerged. He passed it around for each of us to smell so we could catch the scent unique to that particular species of truffle.

At this point, Farah’s puppy figured a way out of the farmyard and joined us, tail wagging. Edouard warned us not to play with the two border collies as it would distract Farah from her job. We continued on the hunt and several of us got a chance to dig a truffle. Mine played hard to get and I muttered “Il n’y a pas de truffe ici.”  But I was wrong. A few more swipes of the trowel and it emerged in all its earthy, umami glory.

When everyone who wanted to dig had a chance, we returned to the farmhouse for a trufflicious homemade lunch with truffles at almost every course. The menu included:

It was all delicious and we ate every bite. It turns out that you can’t actually cook with truffles because the heat destroys their delicate flavor. You can add them to warm sauces, shave them into warm food, or, as with the brouillard, cook them carefully in a bain marie over very low heat. 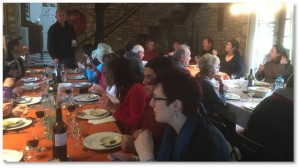 This was one of the excellent off-boat tours that @VikingRiver arranged for us. I learned a lot about food, wine, history,and architecture easily and enjoyably.

It was also just one of the phenomenal meals we ate during the cruise. Whether on the Viking Forseti or off, the food was truly exceptional. And the wine!  Mes amis, the wine was spectacular and changed my palate forever.

1 thought on “Truffle Hunting in France”