News stories about the environment always grab my attention. Three of them have appeared recently and I have some things to say. As usual, though, they have expanded to fill more space than I intended.  So, here’s the first one about sunny-day flooding and airport terminals. 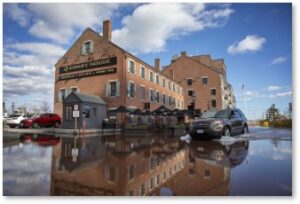 The Wall Street Journal reports that scientists say, “Coastal flooding in the U.S. on the rise as sea levels climb.” This is neither new, nor a shock. It reaffirms that coastal cities are unlikely to remain as dry as they have been in the past–or are now.

The article, by Eric Niiler, tells us that the National Oceanic and Atmospheric Administration (NOAA) has given us a warning.

“…the Atlantic, Pacific and Gulf coasts will experience this so-called high-tide or sunny-day flooding an average of three to seven days between May 2022 and April 2023.”

This is why I felt some consternation when another article recently related that Boston’s Logan International Airport had received a federal grant of $62 million from the Federal Aviation Administration for upgrades. The grant is part of the infrastructure bill signed last fall.

Nothing wrong with that, of course. Logan can always use money for upgrades. After all, the airport: has the most expensive parking in the US and is the seventh worst in the country for summer flight cancellations. 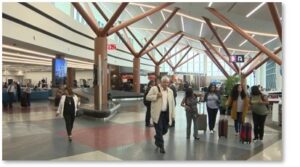 But wait. The Massachusetts Port Authority (MassPort) plans to use the FAA infrastructure grant money to upgrades its terminals. This comes on top of a multi-million-dollar modernization of the international Terminal E.

The plans sound fine on their face. But Logan is also built on land that was formerly not land at all but Boston Harbor.

When the airport was created in 1923, mostly as a military field, engineers built it up from 134 acres of made land called the East Boston Flats. Historian and author Nancy Seasholes tells us that this location was supposed to be temporary. The newly made land had been slated for industrial port development.

The rest is history. Boston Logan today is an international airport that covers 2,384 acres, has six runways and four passenger terminals, It employs an estimated 16,000 people. Logan is the largest airport in New England and the 16th busiest in the United States. 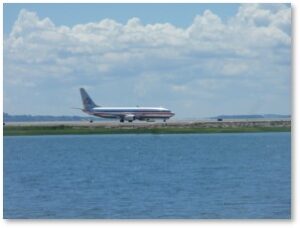 On the runway at Logan

The Boston waterfront already experiences flooding during big storms as well as on sunny-days when there are king tides.

The WSJ’s article notes that, “…sunny-day flooding can pose a nuisance to motorists, pedestrians and landowners as seawater surges over sea walls and bubbles up from storm drains before retreating hours later.”

When it comes to an airport, however, flooding can interfere with basic services, such as airplanes taking off and landing. That’s why I expected to hear that part of the $62 million grant would go toward protecting the runways from flooding, regardless of cause.

Coming and Going on Schedule

While we all enjoy nice, clean terminals that move passengers in and out smoothly as well as providing amenities, an airport’s basic function requires planes to come and go on schedule.

With seemingly no plan to use this federal windfall to protect runways from a runaway harbor, Boston Logan may have to implement alternatives to current operations.

One such alternative would restrict airplane movement to low tide only. This would mean no planes could land or take off while the runway is flooded. 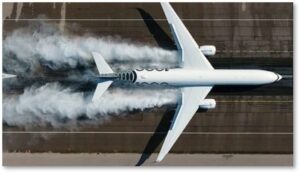 Such a schedule would confine movement to blocks of several hours a day and require passengers to keep track of the tide charts as well as their flight times.

To free up runway time for passengers, administrators could move all private plane and cargo traffic to other, inland, airports, such as Worcester and Hanscom Field, MA, Manchester NH, and Providence, RI.

OR they could shift attention from terminals to runways—and do it now, before those big jets start leaving rooster tails instead of contrails.