You would think that members of the news media, of all people, would understand the power of words. Making their living as they do, with words, one might expect them to choose those words carefully, cognizant of innuendo and not just meaning.

News Media Don’t Get It

Over and over again, reporters and editors—print and broadcast—take the easy route. They use the words that are handed to them. They repeat the simple words, the short words, the words that someone else has generated and wants them to use.

Sometimes, often in politics, those words come loaded. They carry a freight of innuendo that goes far beyond the obvious meaning.

Let’s parse the currently popular phrase Caravan of Migrants. Check out the definitions. 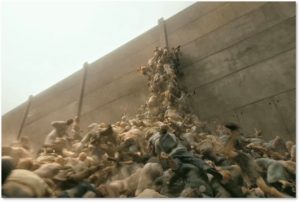 These are zombies, not refugees, but you get the picture

These words have a purpose. Using them leads us to believe that the “caravan of migrants” is comprised of rootless, shiftless workers seeking to enter the United States. We also assume they can take advantage of our social support programs and healthcare without, you know, actually working. Every time the press uses that phrase, they reinforce this impression.

Central American has no desert, although Mexico does. The possibility of employment does not motivate these people. They seek safety from gang warfare, violence, rape, and death threats.

I will substitute another term: “Flow of Refugees Seeking Asylum.” 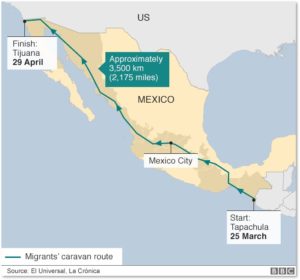 Route of the “migration”

This describes more accurately what is driving these mothers and fathers. Why else would they take or send children and toddlers on a long, dangerous trek. For what other reason would they subject children to thousands of miles without shelter or security, clean water or a steady food supply?

It requires a pretty powerful motivation like a threat of death to themselves or their children to drive people from their homes and flee with their families into the jungle.

Migrants have an economic motive. Refugees flee for their lives.

I will avoid the politics of this event along with whether I agree with those policies. My point—and I do have one—is simple. Journalists abdicate their responsibility to report on events accurately. Instead of analyzing the situation and applying the correct words to it, they choose to accept and replicate the words provided by the administration.

I understand—and have commented before—on how well Republicans choose words that will manipulate emotions to generate fear of and anger about something they oppose. Terms like “entitlements,” “partial-birth abortion,” “death tax” and “alternate facts” do not emerge on their own. Someone creates them to achieve a particular effect.

Democrats have proven themselves clueless in this regard, stubbornly thinking that they only need to communicate facts and logic, despite ample evidence to the contrary.

But journalists play a whole different role when it comes to the accuracy of language. Words have meaning and power. Those who have a duty to communicate must employ them with precision.

Politicians may employ “truthiness” and “alternate facts.” The news media cannot, in good conscience, play along. Yet they do. Every day. It infuriates people like me, who see how lazy reporting and editing result in the witless dissemination of propaganda.

The Slap-Your-Hand Award for News Media

Given that no one else has done it, I have created the “Slap-Your-Hand Award” for lazy reporting, writing, editing and broadcasting by the mainstream media. Today, I give the Slappy to every broadcast news station, cable and network, except for Fox News. As a wholly owned subsidiary of the GOP Administration, they have the dissemination of propaganda in their mission statement. 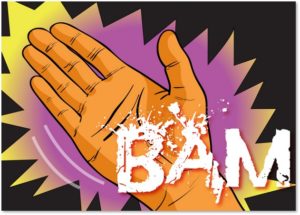 I also award the Slappy to major newspapers and magazines, including the New York Times, the Washington Post, and the Boston Globe. I exempt The Wall Street Journal for the same reason as Fox News. Ironically, an immigrant founded Fox News and bought the WSJ. But he came in a private jet.

Think the news media will listen and pay attention? Yeah, I’m not holding my breath, either.