Two articles about New York City popped up on Twitter this week. One made me nod in agreement while the other made me laugh out loud:

First there’s “New York’s Dour State of Mind” by Jordan Weissmann the senior business and economic correspondent for Slate. He deconstructs the Behavioral Risk Factor Surveillance System, a huge survey conducted every year by the Centers for Disease Control. One of the questions asked is, “In general, how satisfied are you with your life?” Using the responses, Edward Glaeser and Oren Ziv of Harvard and Joshua Gottlieb of the University of British Columbia drafted a paper to find which major metro areas scored highest and lowest for joy. “And despite being a thriving, global capital of culture and finance, NYC finished dead last.”

The academic authors of the paper controlled the data for a variety of factors but @JFWeissmann thought this was like “ranking NFL teams while ignoring their win-loss records” so he checked out the full data sets. The result? “New York still takes the grand prize for big-city misery.”

A Horrible Place to Live 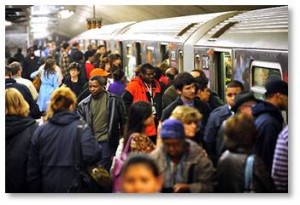 Moving on to the satirical website The Onion I found an article published four years ago (even then they knew) called, “8.4 Million New Yorkers Suddenly Realize New York City a Horrible Place to Live.”

Maybe you have to live in or have lived in NYC to appreciate this article fully but it got me with the first sentence:

“At 4:32 p.m. Tuesday, every single resident of New York City decided to evacuate the famed metropolis, having realized it was nothing more than a massive, trash-ridden hellhole that slowly sucks the life out of every one of its inhabitants.”

We lived in New York City—our apartment was in the Flatbush section of Brooklyn—for almost four years after we were married. I worked first at Dow Jones on Broad Street in the Financial District and then at a large architectural/engineering firm on Park Avenue in Midtown. I can honestly say that I’m glad I became a short-term New Yorker for a lot of reasons even though I hated living there about 80% of the time.

Living in New York made me a bigger person: more confident, more assertive, more tolerant, and certainly more sophisticated than the small-town girl I had been. It offered me experiences and opportunities I would never have gotten anywhere else. It also frequently made me crazy. There is nothing like being woken up at 2:00 a.m. by a car alarm that screeches on and on and on to get your crazy mojo working. The rattle and bang of security grates slamming up at 6:00 a.m. on a Saturday morning will do it, too.

So Why Live There? 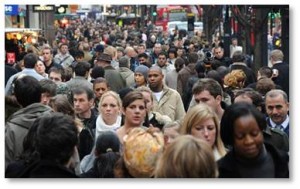 In conversations, I would often ask people why they lived with the dirt, the noise, the crowds, the garbage, the graffiti, the violence, and the constant fights to get what you want or need, just for the privilege of living in New York. I typically got two answers:

Notice that these two answers contradict one another. A funny thing happened, though, when I asked the people who gave the second answer about the last time they had visited those places or taken part in any of the events.

You get the picture. They stayed in New York for things they never went to, places they never visited, and experiences they never had. This is what @TheOnion defines as “just a defense mechanism.” They limited their own horizons to grungy neighborhoods that were different from suburbs elsewhere only in that they were dirtier, noisier and more crowded than other places.

The Onion claims that, “According to residents, the mass exodus was triggered by a number of normal, everyday New York City events.” These are New York Moments, little epiphanies that make you realize exactly how dehumanizing the Big Apple is on a day-to-day basis. The examples given in the article are fictional—although based on real-life experiences—but I had my own actual New York Moment. 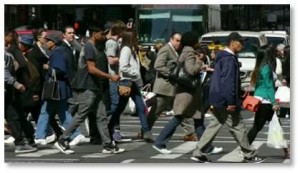 It happened on a workday in the summer when my pantyhose got a big run. At lunchtime I headed out of the office to the local Duane Reed to buy another pair. (Women all wore pantyhose then, even in the summer.)

The sidewalks were crowded with people walking at warp speed and heat rolled up from the concrete in waves. The smells of rotting garbage and auto exhaust from the orange smog over the city choked the air. When I reached the store it was filled with more people all trying to do the same thing: grab what they needed and get back to work as fast as possible. Everything in New York is done as fast as possible: it was great training for working in the high tech industry.

Winning the Right to Pay

I held my package of pantyhose and pushed my way to the cash registers.  A crowd of people stood in front of the checkout counter with the loudest, pushiest people trying to thrust their money at a clerk so they could leave. People elbowed their way through the crowd, shoving one another and complaining about the inconvenience while harried clerks tried to handle the crowd.

I had to wait much longer than I really had the time for and defend myself against customers who were trying to push in front of me. I realized that the simple act of paying for the pantyhose had become a competitive event with the most aggressive people winning the right to pay for their purchase and escape back out to the hot, stinking sidewalk.

When I got back to the office I had my epiphany: I could stay in the city and become a New Yorker—loud, pushy, aggressive, cynical, and angry—because that’s the mindset that’s needed for someone to succeed in the city. Or we could leave and move to a part of the country where people were pleasant, helpful, cooperative and friendly.

Like all those folks in The Onion article, we left New York, NY, and we have never regretted it. Over the years we have been back to New York City many times for family events and celebrations. In January we went there to see the new American Wing at the Metropolitan Museum of Art and to buy pickles on the Lower East Side. For a long weekend I can put up with it all and actually enjoy my time there. Now I can ignore NYC’s problems  because I can see the light at the end of the tunnel or, in our case, the Triborough Bridge.