Susanne’s post yesterday on deceptive food packaging rang a bell because it mentions how her husband is the one who buys and eats chips and ice cream.  This interested me because I have found that people often can be divided into two groups, depending on which types of food are almost addictive for them:

People who prefer one will usually still eat the other but won’t crave it and can do without it easily. I’m a salt-and-grease person so I can walk by a candy dish all day without having the urge to eat any of it. This worked well in the office, especially around Halloween, Christmas and Easter, when candy seems to be on everyone’s desk. I can look at a five-pound box of chocolates (or however much it really weighs) and think it looks pretty but not want a single piece.  Like everyone else, I eat birthday cake when it’s being passed around but I eat the cake from the inside out and leave the frosting on the plate: it’s just too sweet.

My husband, unlike Susanne’s, is a sugar person.  He eats all the frosting.  He can eat a bag of Swedish fish, which I find repulsive.  If he knows the ice cream is in the freezer, he wants it—and he wants it right now. He would be happy with a box of Jujubes or Good and Plenty at the movies but usually eats the salty popcorn, which I prefer.

Are we born with these preferences or do we develop them over time? Are you addicted to sugar or salt and fat? 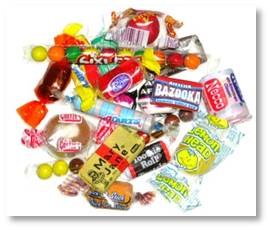 Ruining My Teeth One Penny at a Time

Like every kid, I loved candy when I was little.  My mother would send my sister and me to Dube’s little corner store on Riverside Avenue in Somerset to get a loaf of bread and we were allowed to spend the extra pennies on candy. I won’t tell you how much the bread cost because (1) You wouldn’t believe it, (2) It was soft white bread, and (3) It would make me seem older than a T-Rex.

But we spent quite a bit of time poring over the penny candy that made such a tantalizing display on the counter before finally making our selection. Would it be Mary Janes or malted milk balls?  Squirrel Nut Zippers or Necco wafers? Sugar Daddys or Bit o’ Honey? Candy cigarettes (yes, there was such a thing) or candy buttons on a strip of paper? We would eat our purchases while walking home with the loaf of bread. Life was good.

The result? Cavities and painful trips to the dentist. After a while, the sugar hurt my teeth when I ate candy and I enjoyed it less. Even then, though, I also loved salted pumpkin seeds and would eat whole boxes of them.

The Minus Freshman Fifteen

Later I developed teen acne and, at the time, chocolate was deemed to be the culprit. Because I was heading off to college and worried about my appearance, I dropped all chocolate from my diet.  In the dormitory cafeteria, I avoided fried food, chocolate and sugar, which was difficult because fries were on the menu at almost every lunch and at dinner the cafeteria cooks liked to throw whole potatoes in the Fryolator.  But I was disciplined and focused on looking good.  I didn’t have money to eat out so that removed one big temptation from my meal choices. 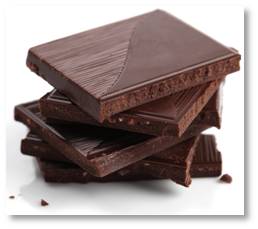 Instead of gaining weight in my freshmen year—the standard freshman fifteen—I lost it. My skin cleared up and by Christmas I weighed 110 pounds soaking wet.  I had also lost any taste for chocolate or candy of any kind and that was fine with me.  I have not eaten a candy bar in more years than I want to count.  Now that dark chocolate is a superfood, though, I have added it back into my kitchen in a small way. Every once in a while I have a piece about the size of a domino and it tastes amazing. You can even buy it with blueberries or almonds, which make it even more super.

The salt and fat are still a problem, though, because those are the foods I can’t ignore. I try not to buy them because it’s much harder for me to resist them.  I can put ice cream in the freezer, know that it’s there, and not feel any compulsion to eat it for weeks.  But a bag of chips calls to me, pleading for me to open it and get that wonderful salt rush.  I have never met a potato chip I didn’t like. If we’re in a restaurant, it’s difficult to ignore the menu items that come with fries in favor of the salad I know I should eat.  (I will eat salad, I will eat salad, I WILL eat salad.) When I worked in a building with a cafeteria, it was easy to get lunch from the salad bar every day. Making it myself every day is just a chore.

On the other hand, fish and chips is a dish that has just too much grease to consume in any one meal and it would make me sick. It would probably also make the arthritis in my hands worse, depending on what type of fat was in the Fryolator, probably an Omega 6.

So are we born with our preferences or do we develop them over time?  Do we learn to like—or dislike—certain foods or is that programmed in to our genes? Probably it’s a little of both. If only there was a third kind of person: a salad person.  If only I could program myself to be addicted to salad and ignore potato chips. Wouldn’t it be wonderful to crave salad and get a food rush from its healthy ingredients?  That would make my life so much easier and save me a lot of gym time.

Which type are you?  Which type of food calls out to you from the kitchen?  Which one can’t you resist?

3 thoughts on “Addicted to Sugar or Salt and Fat?”