While having lunch with a friend on Saturday, she mentioned how upset she is by the coarsening of America. I have to agree. And this has nothing to do with politics.

I see three ways America has “gone downhill,” so to speak, ways in which we seem less evolved  than we used to be as a nation:

Okay, my friend and I belong to the generation that got its mouth washed out with soap for using foul language. That is not a metaphor. By “foul” I mean words like damn, ass, fart, and shit. The F-bomb was off the table, too vulgar for consideration except by men working and playing sports with other men. It wasn’t spoken in public. My mother wouldn’t even say “shut up,” although I’m sure it came to her lips more than once when dealing with the four of us.

Even in the Wild West, men would moderate their language when women walked by, using “church language” as a warning to tone it down. I’m sure that women in society’s dregs swore just as fluently as men but from the middle class up, swearing marked you as vulgar and low-class. People cared.

Exposed to the Worst

Today we hear all that and more in any public forum. Kids and grandkids get exposed to the worst language imaginable in supermarkets, movie theaters, sports stadiums, shopping malls and pretty much everywhere people gather. They pick it up and repeat it to see what the parental reaction will be. If you laugh, because they are very small and cute, you are doomed. Do not be that parent.

The only way to avoid having your children sound like longshoremen is to say firmly, “We don’t use that language in this house.” When the protest that other people use those words all the time, you reply, “Yes, I know. But we do not use them in this house. And I don’t want to hear you say that word again.” It works—at least until they’re teenagers. It delays some of the coarsening.

I can see the eyeballs rolling about this one with “Okay Boomer” sure to follow but people don’t know how to dress properly any more. In fact, they don’t know that they should dress properly.

Now, I’m not about to lament the demise of hats in public, twin sets, pearl necklaces and little white gloves. (I did once speak up in favor of pantyhose but that opened the blog up to comments from fetishists that I don’t even want to think about.) 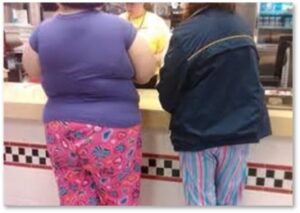 Pajamas at the mall

Surely, however, there’s a step somewhere between June Cleaver and Lady Gaga, between a society tea party and Goth leather. But where? I have been known to roll my own eyeballs when I’ve seen:

Any male over the age of 17 should have a suit for dressy occasions plus chinos and a sports jacket for less dressy one. There, I said it.

People don’t know how to behave in public any more. Once upon a time, parents considered this their responsibility. As I said in a previous post about free-range children, parents must teach their offspring how to behave in society. In America these days, no one seems to have taken on that job. Things are different in Europe.

Last week my husband and I went out to breakfast. The table next to us had three children who were old enough to have some manners but were, instead, shouting, squirming and running around. I kept my back turned to prevent my Inner Grandma from coming out and saying something to them.

In France, on the other hand, children behave. In 2019 we went to the sound and light show in Rouen.  It was a short walk from our Viking Longship to the square in front of the Cathedral of Rouen. There we sat on the steps and waited for the show to begin. 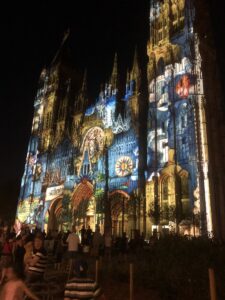 Families began to arrive: parents with children and often with dogs. Everyone sat quietly: chatting, reading, looking at phones and waiting I looked around me at children of all ages who were quiet, polite, and stationary. They didn’t run, scream, whine, push, shove, or careen into others. They just sat and waited. I couldn’t help thinking how different this scene would be in the United States.

Of course, from what I have read, parents in France swat their children for misbehavior. Not only that, teachers do as well. This is accepted. D’accord. How else does one civilize young wolves? In America the children hit grownups. Is that an improvement?

Don’t get me wrong. I am not an old fuddy-duddy who laments the passing of the Good Old Days. I love change, growth, evolution, and improvement. But these things are definitely not improvements. They leave us less civilized, less socialized, and less refined. They are not great leaps forward but huge steps backward.

I do not want your shrieking children bumping into me. I do not want to see you in the mall or anywhere else wearing pajamas. And I most definitely don’t want to hear your vulgar language when I’m eating out. When is enough enough? I don’t know but I expect to see and hear worse before this decade is out.

Related Posts on the Coarsening of America