Last week I ran a Facebook survey to ask readers what series about Boston they would like to read next. The overwhelming response was for one about how Boston streets got their names. To kick that series off, here’s some background information.

Boston streets have a bad reputation: people joke that the city just paved over the cow paths. I hear it all the time when I give a Boston By Foot tour. This apocryphal story gives the cows a bad rap, however, because they were not really allowed to wander wherever they wanted to go. The reality is a little more complex. 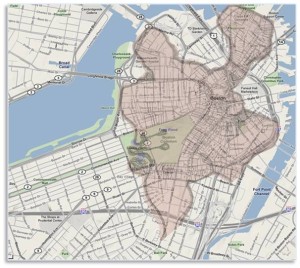 The old Shawmut Peninsula was shaped like a ragged three-leaf clover and had a very irregular shoreline. Plus, it held multiple hills.

There was the Tri-mount of Beacon Hill, Pemberton Hill and Mount Vernon, plus Fort Hill and Copp’s Hill. The large Mill Pond added another obstacle and the Charles River tides would have made mudflats accessible only at low tide.

People had to get from one place to another in the course of their daily activities and they usually took the shortest route, given the topography between Point A and Point B. These frequent destinations were the ones that supported their lives and livelihoods: the spring, the mill, the pasture, the church, the Town House, the market, and the burial ground, for example.

You would probably not have walked up steep Beacon Hill if you didn’t have to because going around would have been easier. The coves and ponds would also have sent people on a circuitous route. In the history of Boston’s streets, geography was destiny.

Streets often had names associated with places and activities. In a March post, for example, I talked about the Great Spring that gave Spring Lane its name.

Made Land and Alphabet Streets

As Boston grew by making land, it sometimes added whole neighborhoods. In that case, the streets tended to be straighter and more regular. They were named according to a plan. These include:

Starting on the west end of the street closest to Northeastern University we find Albemarle, Blackstone, Cumberland, Durham, Follen, Garrison, Harcourt, and Irvington streets with the South End’s West Newton Street in place of the “E.”

You see, the cows really had nothing to do with it.

That still leaves us with streets named for people who were once famous or powerful but who are now long dead and sometimes forgotten. You would think that, given Boston’s role in the creation of our country, we would have a neighborhood of streets named for the Founding Fathers. Not so. 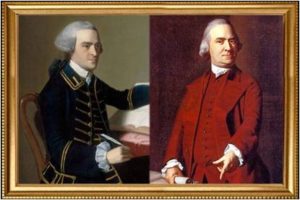 You’ll find Revere Street and Hancock Street on Beacon Hill, Adams Street in Charlestown near Old Ironsides, and Franklin Street and Otis Street downtown. So we do have streets named for Boston’s Patriots, even if they’re not together in a neighborhood.

In future posts I’ll profile one or two streets with interesting or historically significant names. There are so many to choose from, I’m not sure where to start. Feel free to submit any names that have puzzled or intrigued you.

Along the way we’ll meet some of those notable city fathers and some Native Americans, too, I’m sure. I’ll do the research but we’ll all learn a lot.

If you like this series, don’t forget to Share and Like and Retweet so more people can read up on Boston streets, whether they visit once or travel them daily.

44 thoughts on “Boston Street Names: Who? What? Where?”