A person dies twice: once when they take their final breath…and the last time their name is spoken. 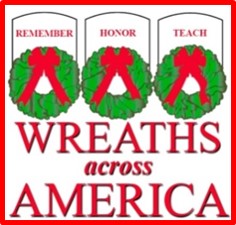 On December 16, 2017 I will join Wreaths Across America and thousands of volunteers gathering in Arlington National Cemetery. We will be honoring the lives of fallen soldiers by laying a remembrance wreath on each grave; touching the headstone and speaking the soldier’s name aloud.

This year, volunteers will place 245,000 wreaths, delivered early in the morning by a convoy of sixty-five 18-wheeler trucks. The convoy arrives at the McClellan Gate entrance, fanning out one by one into the 200-acre cemetery—a ritual that brings tears to my eyes no matter how many times I see it.

Volunteers begin arriving as early at 6:00 am to act as honor guards, welcoming the drivers and trucks into Arlington. 2017 marks Wreaths Across America’s 26th year honoring America’s fallen service men and women.

Wreath’s Across America evolved from a program started by Morrill Worcester, the founder and owner of the Worcester Wreath Company in Harrington, Maine.

When he was 12 years old he won a trip to Washington D.C. and he never forgot his visit to Arlington National Cemetery. He became a successful businessman and often felt his good fortune was underwritten by our Veterans, who gave their lives to defend America’s values.

In 1992, as the holiday season was winding down, the Worcester Wreath company found themselves with an unexpected surplus of 5,000 wreaths. Mr. Worcester remembered his boyhood visit to Arlington and decided to put those wreaths where they would mean something—to him and to families of those who gave their lives in service to our country.

Working with Senator Olympia Snowe, he made arrangements for the wreaths to be placed at Arlington National Cemetery. They were to be laid on graves in an older section of the cemetery that had seen a decline in visitors.

As news of his plan spread, the owner of a local Maine trucking company, Blue Bird Ranch, offered to transport the wreaths to Arlington. 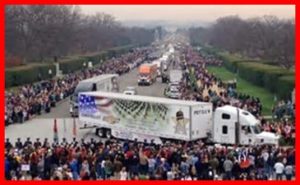 When the wreaths arrived, members of the local VFW and American Legion decorated each one with a hand-tied red bow. The Maine State Society of Washington, D.C.  organized volunteers for the wreath-laying, including a special ceremony at the Tomb of the Unknown Soldier.

The event received modest attention from local news outlets until 2005, when a photo of the headstones and wreaths covered in snow was shared on the internet. A local effort suddenly went viral and got national attention.

Requests began to pour in from across the country. People wanted to continue the tradition in other military cemeteries and to volunteer for the Arlington wreath laying project.

Morrill Worcester became known as the man who honored our nation’s soldiers at Christmas. He was unable to meet the increased demand for wreaths, now in the thousands for each state. Instead, Worcester sent seven wreaths to every state, one for each branch of the military, and one for POW/MIAs.

In 2006, with help from multiple civic organizations, simultaneous wreath-laying ceremonies were held at over 150 locations around the country.

The Patriot Guard Riders, a motorcycle organization whose members are invited to attend funeral services of the U.S. military, firefighters and police volunteered to escort the wreaths to Arlington. This ride was the start of what has become an annual “Veterans Honor Parade,” with riders across American supporting wreath-laying ceremonies.

The requests and groups of volunteers continued to grow until it became bigger than Arlington and much too big for one company in Maine. In 2007, the Worcester family, and all the groups and individuals that supported their annual Christmas wreath ceremony, formed Wreaths Across America.

This Saturday volunteers will begin handing out and placing wreaths at 7:00 am. There will be special ceremonies conducted at the Columbarium, the President William F. Taft Monument, the President John F. Kennedy Memorial, and the USS Battleship Maine Monument, concluding with the wreath laying at the Tomb of the Unknowns at 12:00 noon, marking the official end of the ceremony. 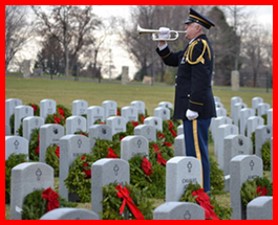 Arlington has over 400,000 graves and holds 25 funerals every day. They anticipate a shortfall of 25,000 wreaths this year and are still soliciting donations. The cost for sponsoring an individual wreath is $15.00, and the total cost at Arlington alone is $3.6 million. Wreaths are also placed at grave sites in 1,550 other military cemeteries across the nation.

This year I have the privilege of laying a wreath on the grave of my classmate and friend Captain Theodore Block.  Next year, I will place the wreath on my Dad’s grave.

Rest in peace soldiers, your names will not be silenced or forgotten.

Wreath donations can be sent to:
Wreaths Across America
PO Box 249
Columbia Falls, ME 04623
www.wreathsacrossamerica.org

4 thoughts on “Wreaths Across America: A Volunteer Tribute”