“We are stardust, we are golden
And we’ve got to get ourselves back to the garden.”
— Joni Mitchell

The song is great but the reality of our human condition is somewhat different – a black-and-white picture that has nothing to do with race or skin color.

Stardust: The Stuff of Stars

On the good side, scientists tell us that we human beings are made of star stuff. The late astronomer, cosmologist, astrophysicist, astrobiologist and astrophysicist Carl Sagan famously said:

“We are a way for the universe to know itself. Some part of our being knows this is where we came from. We long to return. And we can, because the cosmos is also within us. We’re made of star stuff.” 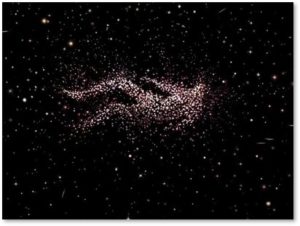 By that he meant that human beings have carbon, nitrogen, and oxygen atoms in our bodies, as well as atoms of all other heavy elements. The atoms were created more than 4.5 billion years ago in previous generations of stars. Given that every creature on earth, including human beings, contains these elements, we are literally made from the substance of stars.

The universe originally consisted of hydrogen and helium. The carbon was made after the Big Bang, over billions of years. The six most abundant elements of life—carbon, hydrogen, nitrogen, oxygen, phosphorous, and sulfur—are called the CHNOPS elements. They form the building blocks of every part of our bodies from the DNA out. Think about the calcium in your bones, the potassium in your heart, the iron in your blood, and the hydrogen and oxygen in water inside your cells,

But how did it get from way out there all the way down here? It was a long strange trip, but you can thank supernovas for distributing it. When a star exhausts its hydrogen fuel, it dies in an explosion called a nova. It the star is a giant it creates a supernova. This explosion throws a large cloud of dust and gas of various types out into space and that cloud disperses throughout interstellar space.

That means all life on earth and the atoms in our bodies come from the exploded hearts of stars. Pretty cool, huh? But wait, there’s more. And the second part does not paint not such a pretty picture.

Human beings have left their mark on Planet Earth by spreading plastic everywhere. It appears no mountain is too high, no ocean depths too low, and no wilderness too remote to have been spared the human-created plague that is plastic pollution. 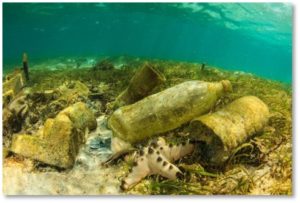 Now it’s coming back to bite us. Having polluted the world, we might have predicted that what goes around, comes around, and eventually our plastic trash would come back to us. Just not, you know, IN us.

We have contaminated not just the land, the oceans, and orbital space. We have also polluted our own bodies—and probably those of other living creatures—with plastic. I refer specifically to microplastics.

Canadian researchers have estimated that the average person consumes thousands of  particles of plastic each year. We don’t confuse it for food like seabirds and whales do or get stuck in it like sea turtles. So, how do all those tiny plastic bits get inside the human body? 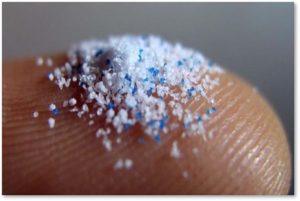 A microplastic particle is defined any piece of plastic smaller than five millimeters. Many pieces are much smaller and only visible under a microscope.

Microplastics float in the ocean, settle to the bottom of the sea, mingle with dirt, and blow in the wind. We ingest microplastics simply by drinking water and breathing it in the air. We also eat it in seafood that has ingested plastic from the rivers and oceans.

Last fall, Australian researchers found microplastics in fecal samples from eight people participating in a pilot study to research how much humans might be inadvertently consuming plastic. Some of those samples were disturbingly, um, large. The study clearly needs to be extended for more comprehensive results, but does anyone want to gamble that those findings are anomalies?

A new study in the journal Environmental Science and Technology says it’s possible that:

“…humans may be consuming anywhere from 39,000 to 52,000 microplastic particles a year. With added estimates of how much microplastic might be inhaled, that number is more than 74,000.”

W.C. Fields once said, ““I never drink water because of the disgusting things that fish do in it.” (There’s a shorter, cruder version but I’ll stick with this one.) Guess what? Human beings do much worse things in and with water.

People who drink tap water ingest an additional 4,000 plastic particles annually, while those who consume only bottled water consume an additional 90,000, the study found.

What does that mean for our health? What impact do microplastics have on the human body? Wait for it. We. Don’t. Know. 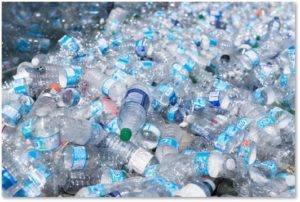 There is simply no way of knowing because this has never happened before in history. Science has just begun studying the impact of microplastics in the human body. A study last fall showed that microplastics accelerate cell death at three times the normal rate.

Microplastics come in the form of fragments, pellets, beads, fibers, and film. It can be made up of from a number of different materials with hundreds of different chemical additives. We can’t be sure if it stays in the body or passes on through completely. We don’t know if it’s inert or acts like a time-release capsule for toxic chemicals. Will it do to our microbiomes what it does to larger animals? We don’t know if chemicals are absorbed from the microplastics. If so, do those toxins build up over time? We. Don’t. Know. 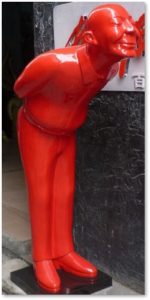 We know what asbestos did to human health but the jury is still out on the impact of teeny tiny bits of plastics accumulating in our systems. We could be “plastinating” ourselves with every breath, each meal, and every time we quench our thirst.

I have an image stuck in my head of what happens when the microplastics that are building up in the human body, fill up the inter-cellular spaces, and form a network. We stop moving in mid-stride, frozen by thousands of tiny invisible bits that have locked together.

Probably won’t happen. We didn’t find out about the toxic effects of asbestos right away and directly. I’m sure we will find out what microplastics do to the body eventually—but it will probably be irreversible by then.

From stardust to plastic: A long strange trip, indeed — and not for the better.

“We are stardust.
Billion year old carbon.
We are golden..
Caught in the devil’s bargain”