Travel is famously a broadening experience. While visiting other countries and other places, especially ones with longer histories, one can find both inspiration and surprises. On our recent Viking River Cruise in France, I found some of both.

When I wrote about the Emerson Colonial Theater in March, I mentioned that the orchestra lobby had been modeled on the Hall of Mirrors at Versailles. I didn’t know of a similar inspiration for the staircase—which has an interesting design.
Two weeks ago, I was touring Rouen Cathedral and stopped short when I saw a staircase the looked, well, familiar. I stopped and took a picture. Here are the two staircases side by side. 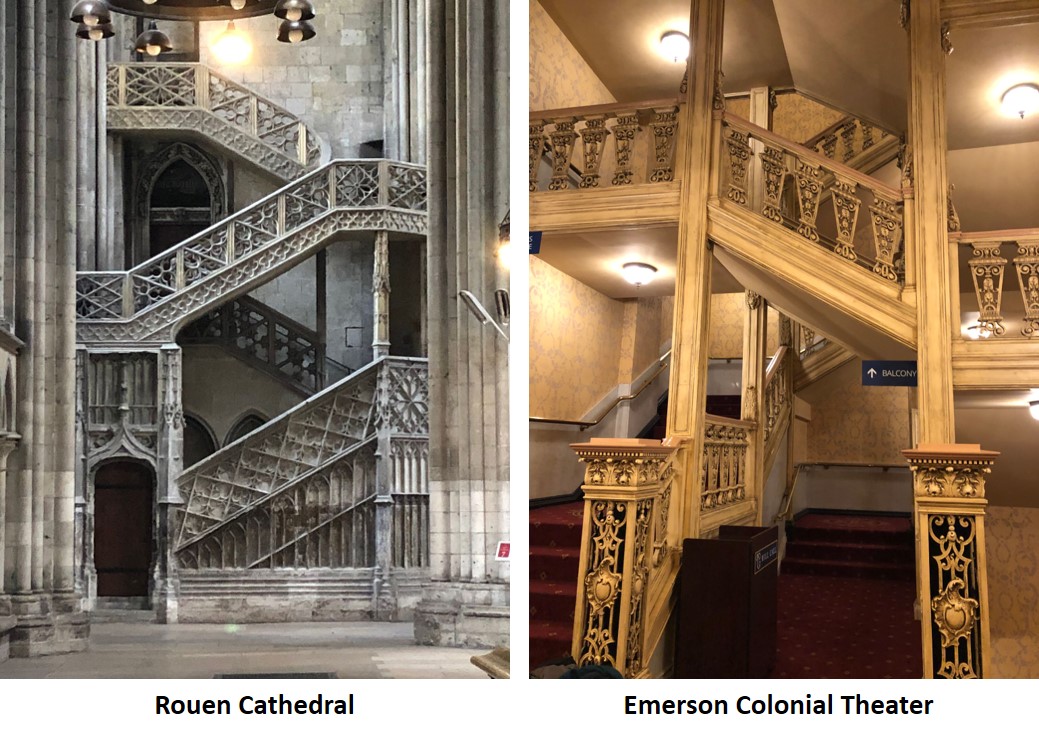 Now, it’s entirely possible that architect Clarence Blackall had never seen Notre Dame Cathedral in Rouen, France, when he designed the Emerson Colonial, which opened in 1900. It’s also possible that Versailles has a similar staircase, which I have never seen. 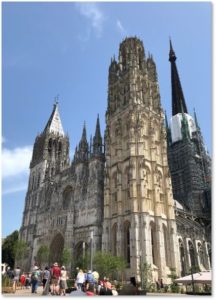 We opted out of the Versailles excursion on our Viking River Cruise because it only lasted four hours—nowhere near long enough to see much of such an enormous site. Also, we chose not to go on a 95-degree day when Versailles would be both crowded and very hot.

Most of the photos I have seen, however, show staircases at Versailles that are significantly larger, grander, and more sweeping than the one in Rouen. Perhaps Clarence Blackall saw the one in Rouen Cathedral on a tour of France and later thought, “I could fit that design into the theater.”

At any rate, I found the similarity strong enough to stop me in my tracks and take a picture. I leave the decision to you. 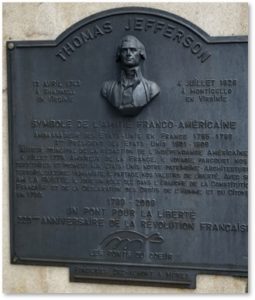 Another unexpected encounter was this plaque dedicated to Thomas Jefferson that we found in Vienne, France. Mr. Jefferson visited Vienne along with United States Diplomat and fellow Francophile Benjamin Franklin on a tour of France in 1787. The citizens of Vienne raised this plaque in 2009 as a symbol of French and American friendship.

Thomas Jefferson served as the United States Minister to France from 1785 to 1789. The plaque honors his contribution as the senior writer of the American Declaration of Independence and a lover of France. It says:

“He travels through our territories and promotes to the United States our heritage land, and culture. A humanist, he shares our values of freedom. With his friend Lafayette, he plays a key role in drafting the French Constitution and the declaration of human rights for man and citizen in 1788. A bridge for friendship. 222 anniversary of the French revolution.”

The Thomas Jefferson plaque is located on the wall of a building opposite the Roman Temple d’Auguste et Livie on the place du Palais. In fact, Mr. Jefferson may have used the temple as inspiration for some of his neo-classical designs in the new United States.

It seems that inspiration can come from anyone, anywhere, who has the eyes to see. And it can pop up at any time, even when you least expect it.