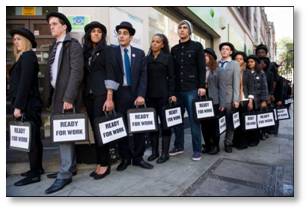 Last week I wrote a post, “Not All Jobs Are Created Equal,” responding to a Wall Street Journal article about why not all jobs are the same. My point was that it doesn’t constitute “job growth” or create new jobs when people who are running out of unemployment benefits take a survival job as @WSJ claimed. I also posted a comment about the article on the Journal’s web site.

The comments I received from other readers regarding my view of underemployment were very interesting.

A Life of Ease?

These men, like the Journal’s editors, seem to believe that people who are collecting unemployment benefits are basically freeloaders who prefer living a life of ease on government handouts to going back to work. I directed them to read my 2103 post on “Movement is Life,” which recommends that the long-term unemployed take a job—any job—to stay busy, engaged, and optimistic. 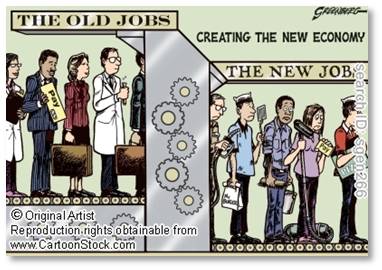 Still, I find the idea that people prefer vegetating on “the dole” astonishing for two reasons:

Granted, some news networks and blowhard commentators spread this sick idea that millions of Americans are just too lazy to work. People who watch Fox News and listen to the likes of Glenn Beck and Rush Limbaugh can get themselves all worked up about how they are supporting this underclass of indolent people.This can be a real temptation for people who have never been laid off or had their company fold under them, If such drones exist, however, it’s not among the people I know and have encountered here in Massachusetts.

Working Outside the Box

The second part of their comments denied that unemployed people take jobs that were far below what their educations, careers, experience, and skills qualified them to do. One man demanded that I provide sources for my statement. Fair enough.

Here are some real-life examples of people I know personally:

A big difficulty is age discrimination. The cult of youth is in full swing, especially in the technology industry. The assumption is that young people “get it” while anyone over 50 (or even close to it) is an old fogey who can’t learn anything new. If you’re unemployed, over 50, and have been out of a job for a long time, finding work in your career is unlikely to happen. If you work in the high tech industry, it’s almost impossible.

The people who have done best at finding gainful employment are the most flexible people. They have recognized the reality that they are unlikely to find the same kind of work, at the same level, earning the same salary as they did before. Teaching school is a whole new career. It’s gainful, respectable work that benefits the entire community but it doesn’t typically pay the kind of six-figure salaries these new teachers were making in their former career. One friend has been elected a state representative. Again, this is a new career that came from thinking way outside the box.

If the goal of this “natural experiment” is to get people off of unemployment and back into the work force, well, it’s working. But let’s not kid ourselves about the reality for the underemployed–or set ourselves up in judgement of people who lost their jobs through no fault of their own and now can’t find another one.

4 thoughts on “Underemployment: The New Reality”