It seems that houses with a view of wildlife have some added market interest, if not added value. Last week’s Mansion section of The Wall Street Journal—that’s what the One Percent calls real estate—focused on several houses that provide “Windows on the Wild,” in an article by Amy Gamerman. I use the word “homes” with tongue firmly in cheek as they appear to be size of small inns or ski lodges

One such house in Sarasota, Florida, is known as the Dolphin House for its windows looking out onto a lagoon filled with sea life of all types. Another in Jackson, Wyoming, has a tower and an elevated bridge that offer views of moose, elk and bear. A third in Washington State, the Bird Watcher’s House, was designed to provide multiple vistas of our feathered friends at different elevations.

The pond looking south from the deck

Before we downsized, we had a similar house—albeit on a totally different scale—in Sudbury, Massachusetts. It stood on a hill with a man-made ice pond behind it. The pond was built back in the days when ice was big business and New England exported it all over the world.

This pocket-sized body of water was too small and too shallow for any boat bigger than a canoe or kayak or any recreation other than pond skating in winter. That made it a fairly isolated miniature wildlife sanctuary and our deck offered a perfect view of the action. I would often walk down and stand by the pond just to watch its population in the different seasons. There’s a magic to viewing wildlife in its natural habitat and it certainly added value to the house where we lived for 37 years.

Denizens of the Pond

Beneath the water, the pond held frogs, small fish, water snakes, and turtles that came out to sun themselves on fallen logs in spring. On it we could watch birds including the Great Blue Herons that flew in and out like planes at LaGuardia, green herons, Canada Geese, and several varieties of ducks. Above it flew red-winged blackbirds, jays, kingfishers, cardinals, flycatchers, chickadees and a whole rainbow of dragonflies. Above them all soared the hawks, turkey vultures and owls. At night a chorus of bullfrogs tuned up. 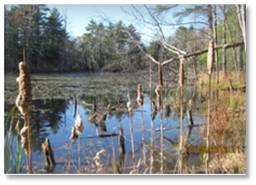 The pond–looking north toward the dam

When the leghold trap was banned in Massachusetts in 2001, the beaver population boomed (what else have they got to do when their lodges are iced in?) and a family of Castor Canadensis moved in.

The industrious critters promptly raised the level of the pond by three feet, killing many of the trees around it. These dead trees offered roosting spots for the herons, and the deadfalls that followed drew woodpeckers. The Audubon Society could not have given us a better view of nature. We didn’t need a tower, an elevated bridge or underwater lights to watch the wildlife. As the family gardene, I saw more of it than most.

Some wildlife experiences stand out in my memory.

I went down to throw some bread to the mallard family that was swimming in this clear area. The mallard drake saw the bread, immediately.hauled himself out onto the ice and began running toward shore. In three steps he lost his footing and slid the next ten feet on his little ducky butt. It was a real Disney moment. The hen, more cautious, learned from his mistake. Climbing onto the ice, she walked slowly after him, careful of her safety and her dignity. I made sure to keep some bread for her—after I had stopped laughing at the drake.

I caught my breath at its sheer size and beauty, with clear black, white and red markings. It made its wild call one more time, as if to tell me who it was, and flew off. (You can hear a pileated woodpecker’s call on the Audubon Society’s eNature website.)

While I would not have had these experiences from the top of a tower or an elevated bridge, I also know that I would not have wanted to walk through a herd of elk on my way to the mailbox. I only dealt with the small critters, not the more dangerous beasts one sees out west. Maybe a tower is the best way to observe charismatic megafauna. 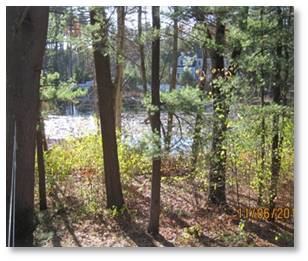 Looking west across the pond from our backyard

The @WSJ article quotes Florida real-estate appraiser Don Saba that “wildlife does not create value in real estate; the wildlife could be there today and gone tomorrow.”

We certainly found the first part of that statement to be true when we put the house on the market. Not everyone enjoys having wildlife in their yard or encountering it when they get the mail and mothers tend to worry about water in the vicinity.

But we loved our wildlife views and I hope the people who live there now enjoy their finned, winged, and four-legged neighbors as much as we did.