The United States Senate has been in the news rather a lot lately. The American people focused a great deal of attention on it during the recent impeachment trial, even if TV viewers had a restricted view.  Although the cameras couldn’t pan around the chamber then, you can see the whole room now simply by going to Dorchester. 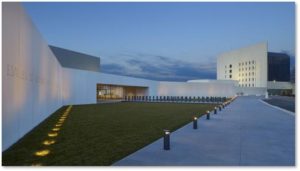 The EMK Institute’s replicate of the Senate Chamber replica isn’t a secret—certainly not a hidden gem. It just doesn’t get as many visitors as other Boston attractions, or even the John F. Kennedy Library next door.

Unlike most historical museums, the EMK Institute doesn’t focus on preserving artifacts that tell a story of a certain time period or represent an historical event. The Core 77 Design Award won by ESI design in 2016 states that: 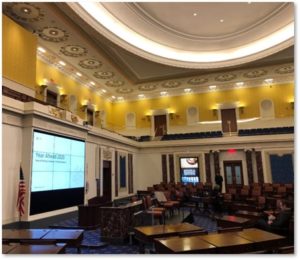 The EMK Institute’s order was, in fact the first mass production of United States Senate desks since the New York cabinet maker Thomas Constantine created the original 48 in 1819.

As I listened to the speakers, I wondered how many schoolchildren with visions of public service would be even more motivated after a virtual trip to the Senate Chamber. Given the deplorable state of civics education in this country, I’m happy to find anything that will make American government more immediate and memorable. This historic space would certainly create more of an impression on schoolchildren than another classroom lecture would.

That education starts before you even walk in the door. Fifty polished granite bollards line the entrance walkway, 25 to a side, each engraved with the name of a state. This tells students that each state has two senators for a total of 100. Inside, the minimal architecture refuses to make a statement of its own. The center, and the focal point, of the Institute is the Senate chamber, which you can enter on all four sides. 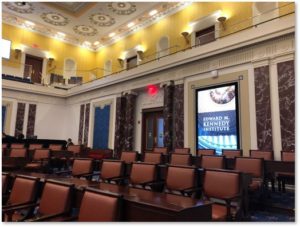 Once inside, you take a seat at one of the replica mahogany desks, and look around you. The colors, the lighting, the marble and woodwork, as well as the decorations replicate those in the Capitol’s Senate Chamber. (It includes a replica of the famous candy desk but minus the sweets.) Only the podium at the front of the chamber is different—lower than the original—and the AV screen behind it improves on what’s in Washington DC.

The Edward M. Kennedy Institute for the United States Senate doesn’t occupy a knock-out building with cutting-edge design. No egotistical starchitect put his personal stamp on this structure. Instead, the 68,000-square-foot structure designed by Uruguayan architect Rafael Viñoly keeps a low profile. The simple white building complements but does not compete with the John F. Kennedy Library and Museum next door. The expanding high-rise structures of the University of Massachusetts across the street have begun to dwarf it, though.

The Institute’s concept, design, and production are the result of a collaboration among Senator Edward M. Kennedy, his wife Vicki Reggie Kennedy, and Edwin Schlossberg of ESI Design. Mr. Schlossberg (husband of Caroline Kennedy Schlossberg) designed the exhibitions and programs. During the production process, Control Group was brought on for software development, Richard Lewis Media Group for media elements, Electrosonic for projection technology, and Gigantic Mechanic for game mechanics. 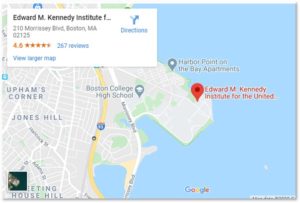 1 thought on “The U.S. Senate Chamber on Columbia Point”