I don’t have the regular post about Boston today for two reasons. So here’s a brief Thursday update by way of explanation instead.

This morning I’m driving to Maryland with my daughter and their family cat, Cringer, to be there when the movers arrive at their new house. The weather is beautiful up here but we’re going to hit rain somewhere around New York City and it will rain the rest of the way. Then thunderstorms and heavy rain once we arrive with the possibility of flash floods. Terrific. 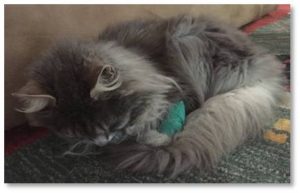 Second: I would have written something in advance and had it scheduled to go up but there was just been too much going on this week for me to be able to do that.

After this move my granddaughters will be living much farther away than they do now. A 45-minute quick drive up Route 495 will be replaced either by a 400-mile drive or round-trip flights. That means I will see M and T less often but will probably spend more time with them when I do visit—a few days or a week instead of overnights. I’m trying to see it not as losing my grandchildren but gaining a place to visit and get away from the daily routine.

Mystique appears to be a tad better today—more mobile and willing to move around. I think her head has come up a little but that could be my imagination. I leave her in the care of my husband and son, who will give the medication and offer food and water. If I put food on her paw she will lick it off eagerly but isn’t interested in whatever is in the dish I stick under her nose. She will probably go back to the vet for some IV fluids as she’s still not drinking. 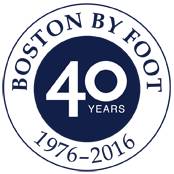 I’m flying back on Saturday morning in time to go to Boston By Foot’s 40th anniversary party at the Boston Beer Company. The organization began giving architectural and historical walking tours of Boston in 1976 and I’m proud to be a member.

I also know that by the time I get to the party, I’ll be more than ready for a beer. Or two.