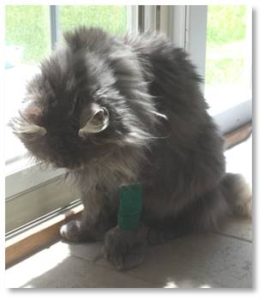 As I explained in yesterday’s post, our cat was injured over the weekend. The doctors at the Foster Hospital for Small Animals of Tufts University in Grafton examined Mystique carefully and found a puncture wound on the right side of her neck. We declined the $1500 MRI and the $2500 CAT scan but okayed an X-ray. It showed no evidence of damage to her bones and the vets didn’t see any neurological “compromise.”  We brought her home yesterday.

But her health is dicey. Mystique can’t lift her head and, while she can move her hind legs,  it’s a slow and painful process. Yesterday, however, they were uncoordinated, tending to go off in their own directions. Rather than embarrass herself trying to walk she stayed crouched on newspapers scattered under the coffee table in the sun room. Today she can move and just surprised me by climbing halfway up the stairs to use Teela’s litterbox. Hers is in the basement but I didn’t want to risk her falling down the stairs and thus the spread newspapers.

We’ve been giving her the (very expensive) meds the vets prescribed but several are to be given with food and she’s not eating or drinking. Clearly in discomfort, she shifts her position constantly in an attempt to alleviate pain. We just gave her some of the pain meds anyway.

This is very distressing. I feel so bad for Mystique. It’s like having a sick baby who cries but can’t tell you where it hurts. It’s especially difficult when she was so energetic and full of life just a few days ago. 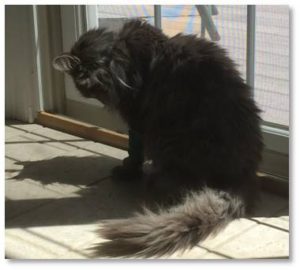 Struggling to get better

What bit her? Mystique can’t tell me but it might have been the fox that has been seen in the neighborhood. I think a fisher cat would have left more damage and probably a lot of blood. A coyote would have finished the job and we would never have seen her again.

Mystique has always been a small cat with a big attitude, convinced she could take on bigger animals and come out on top. She never believed that discretion is the better part of valor and defended her territory aggressively. This time, she may have been too aggressive. Fortunately she just had her regular rabies shot in May and the vets gave her a booster at the hospital.

Will she recover? That’s pretty much up in the air and probably too soon to know for sure. Mystique could begin doing better over the next few days, in which case we just have to keep giving her meds and getting her to eat. Or she could continue in this painful state and then we’ll have to make The Big Decision. The light at the end of the tunnel might be coming from the rainbow bridge.

In the meantime, we’re doing all that we can do and hoping that things turn out for the better. Mystique clearly hasn’t given up yet and struggles to become normal and healthy again. At the very least we can give her some time to win that battle.

1 thought on “Mystique is Struggling to Recover”