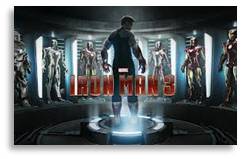 We saw Iron Man 3 on Friday, joining in with the millions of others who made its opening weekend the second largest in movie history after last year’s hit, The Avengers.  It brought in a whopping $175.3 million in North America and another $175.9 million overseas.

Because @Iron_Man 3 opened internationally last week, it has already grossed $680.1 million worldwide. With a production budget of around $200 million, it has already turned a profit and is going strong into the summer blockbuster season. OK, now we know that Iron Man 3 was financially successful and will be even more so by year’s end.  How did it do with the critics?  The movie got a 77% fresh rating on the Tomatometer and 83% of the audience liked it. We did, too, although not as much as we enjoyed the first movie in the franchise. 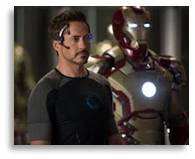 The fun thing about these movies is Tony Stark being Tony Stark.  He’s brilliant, arrogant, entitled, an intellectual snob, and a man with a snarky sardonic sense of humor.  His murmured asides are often the best part of the script.  Although he’s not perfect, Stark’s brains, his money and his suit give him a sense of invincibility that can get him into a lot of trouble.  He’s like Robert Downey Jr. without the drugs.

This movie picks up where The Avengers left off and Tony is suffering from PTSD, a chink in his metal armor that disturbs him but that he can’t fix with technology.  There’s also a flashback to Tony’s (and Robert Downey’s) old playboy persona and the trouble created by his casual thoughtlessness and arrogance.  This is interesting stuff.  When he says, “I’m just a man in a can,” you almost believe that it’s more than just a joke.
The problem is that there’s more than just one or two of these superhero cans for imperfect humans to wear.  ony’s PTSD won’t let him sleep so he goes downstairs to work—and work, and work, and work. But if Tony Stark in a suit is less interesting than Tony Stark outside the can, then a multiplicity of empty suits is even less interesting.  And it dilutes the movie’s impact. 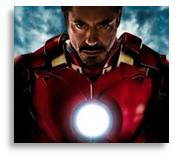 It also led me to wonder what is powering all those heavy-metal flight suits in his high-tech closet.  Tony has his own embedded power source, of course, which is what drove the original suit.  That source was one of a kind. So what’s in all the others—lithium batteries?  A big plug?

Still, the movie is interesting and it has several twists and turns that keep it from being just another slam-bang, knock-down fireworks display with a huge (and hugely noisy) finale. The acting is also top rate, especially on the part of Ben Kingsley and Guy Pearce. Everything held up for me until that last scene, which is both required for the fanboy audience at superhero movies and the greatest weakness of this particular genre (OK, that’s me).
If you like the superhero genre, I recommend it.  If you don’t, don’t bother.  (Well, you wouldn’t anyway.)BTW:  There is an Easter egg at the end of the credits.  If you can sit through the massive list scrolling endlessly down, you get a reward.  Fans of Marvel movies know this and hang around through credits as the cast of thousands who did special effects and location work scrolls endlessly onward.  It ain’t over ’til it’s over.

1 thought on “Third Time Around, Iron Man is Sometimes Just an Empty Suit”