Skip to primary content
In today’s @WSJ, Mortimer Zuckerman comments on “A Jobless Recovery is a Phony Recovery.” Mr. Zuckerman, who is chairman and Editor in Chief of U.S. News & World Report, says that while the number of people with jobs has increased by 753,000 since the start of 2013, some 557,000 of these are only part-time positions. And “fully a third of the currently unemployed have been out of work for more than six months.”

Mr. Zuckerman continues: “With each passing month of bleak job news, the possibility increases of a structural unemployment problem in the U.S. such as Europe experienced in the 1980s.” I believe that this problem already exists—only it affects the portion of the unemployed population that is 55 or older. While Mr. Zuckerman does not break out the statistics by age. I was curious enough to do some digging. This is what I found.

An Urban Institute Study found that, “. . . workers in their fifties were about a fifth less likely than those age 25 to 34 to become reemployed between 2008 and 2011, and they experienced steep wage losses.”Government Accountability Office (GAO) testimony before the Senate’s Special Committee on Aging said, “Although older workers are less likely than younger workers to lose their jobs, it generally takes older job seekers longer to find new work. Since 2007, many job seekers of all ages have experienced long-term unemployment, but individuals age 55 and over have consistently experienced longer durations of unemployment than younger workers. Moreover, the median length of unemployment has more than tripled for older workers since the recession started, increasing at a greater rate than that of younger workers.”The AARP’s Public Policy Institute conducted a survey of the unemployed in Massachusetts which found that, “Though national unemployment rates have declined somewhat since 2009, it still remains high, particularly for workers age 50 and over. In fact, the average length of unemployment between jobs for older workers is well over one year – an all-time high.”

Note:There is a great irony in the U.S. Senate hearing statistics about unemployment among people over 50.  This is a body in which members hold their jobs until they either retire or die, regardless of age or poor health. Having an aide wheel a decrepit Senator in to the chamber so he can vote is not rare. See Bill Maher on our Weekend at Bernie’s Government.

Time Out of Work Matters

This chart from the Over Fifty and Out of Work website shows the disparity clearly.  While people over 50 have always had a higher rate of unemployment, the Great Recession has made it worse, much worse.The amount of time a person has been unemployed matters.  Skills age and become less relevant.  Contacts move on and can be less helpful.  Human Resource departments look askance at a candidate who has been out of work a long time. 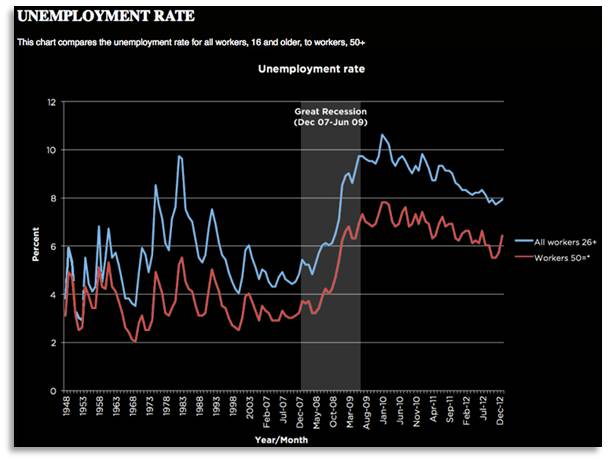 Unemployment rate for workers 16 to 50

In an op-ed piece called “The Human Disaster of Unemployment,” that appeared in @NTY Sunday Review last spring, Dean Baker and Kevin Hassett said, “The prospects for the re-employment of older workers deteriorate sharply the longer they are unemployed. A worker between ages 50 and 61 who has been unemployed for 17 months has only about a 9 percent chance of finding a new job in the next three months. A worker who is 62 or older and in the same situation has only about a 6 percent chance. As unemployment increases in duration, these slim chances drop steadily.”

It’s time to call this what it really is: the Silver Ceiling (#silverceiling). This is the time when your chances of finding another job become vanishingly rare. Candidates hear that they are overqualified or “not quite right” for the position. Most often, they don’t hear back at all.
Although I’m not looking for a job, I responded last week to an interesting Hiring Alert sent to me by a recruiter. Two days later I received an email telling me that I wasn’t quite right for the position. Two days after that, I received the same Hiring Alert again.This problem is only going to grow as more Baby Boomers age and the Silver Tsunami hits the Silver Ceiling with greater force every year.  At the same time, I read and hear news stories about companies complaining that they can’t find qualified workers, that they have open positions they can’t fill, that candidates lack training. Maybe they should try to expand their pool of candidates to include older people who want to continue working but just need an opportunity.