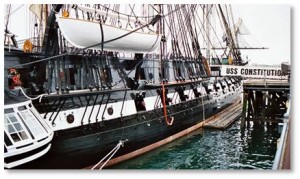 After a lovely warm fall when it was delightful to sit on the porch in the afternoon sun, real fall has finally arrived. It came in abruptly on a burst of cold air and even colder winds this weekend.

My Dark Side of Boston tours for Boston By Foot now truly take place in the dark. I used to hear the cannon on Old Ironsides fire at sunset and once I even got to show my tourees the gunsmoke drifting over Boston Harbor. That takes place now before we get close enough to the harbor to hear this ritual and on Saturday night it will happen before the tour even starts.

The cold ushers in some things (apple pie, beef stew) and pushes out others (corn on the cob, lobster). The pumpkins arrive at the farm stand and tomato season is, finally, over. This was my first year growing tomatoes here in the condo community. I had the landscapers remove three burning bush shrubs (euonymus alatus) from outside the sun room because (1) they’re non-indigenous invasive plants; (2) they drop leaves that the cat brings into the house on her fur; and (3) they are tick nurseries that promote the spread of Lyme Disease.

In their place I planted one Early Girl, one Better Boy and one Beefsteak tomato plant. They took a while to get started but I watered and fed them regularly. I was not, however, conscientious enough about pinching back the shoots. We went to Savannah for a long weekend in June and when we came back the plants were enormous. 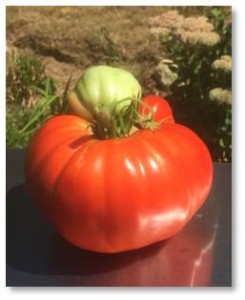 They bent over their cages and twisted any support I put up for them until I had to bungee the cages to the bird feeder. Eventually, though, the plants started to produce fruit and once they had gotten going there was no stopping them.

Tomatoes arrived thick and fast. The Beefsteaks were Hulks the size of dessert plates and one slice would hang over the edge of a sandwich. A big tomato would swallow up a small one until it turned into a Frankentomato. This happened mostly where the greenery was so thick I couldn’t even see that a tomato was growing in there. (I know, not enough pruning.)

We ate tomatoes every day. My favorite lunch was a toasted bialy with cottage cheese and a slab of fresh tomato. Then we were overwhelmed and I started giving them away to the neighbors. Twice I filled a bag with tomatoes and went around my condo complex ringing doorbells and saying, “Tomato trick or treat. Take one.” People loved it and I received compliments on how delicious my tomatoes were.

Happy with their south-facing location and  the heat-absorbing wall behind them, the plants kept producing all through the warm fall. This weekend I went out and picked the green tomatoes off before the frost hit. I thought there would be a few. Instead I found dozens. They are now in plastic bins on the floor ripening in the sunlight. If anyone would like any green tomatoes for any reason or any recipe, please let me know. I am happy to share. 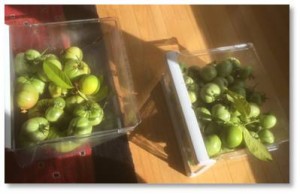 Ripening in the sun

So now the days of warm, ripe luscious tomatoes are over. Soon it will be back to the supermarket with its plastic globes that are picked green and reddened (but not ripened) with ethylene gas. When it comes to good tomatoes, like Red Sox baseball, it’s wait until next year.

But I’m planning ahead. Next spring I’ll put in a cherry tomato, an Early Girl and a Better Boy. The Beefsteaks are astonishing and delicious but they take too long to grow and ripen. I want Tomato Season 2016 to start earlier and last longer. Oh, and I’ll do a better job of pinching back those shoots, too.