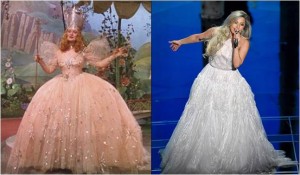 Glinda the Witch of the North and Lady Gaga

I was watching the Academy Awards last week and reading Bon Appetit during the production numbers and acceptance speeches. Then Lady Gaga came on to sing a medley from The Sound of Music and I sat up.

Now, I’m not a big music fan. In the car I mostly listen to NPR or, when that lacks interest, an audio book to extend my reading time. But we’re surrounded by music all the time and I have noticed a trend that makes me like the current crop of music less and less. To be blunt, it’s about the number of singers who cannot sing.

What do I mean by that? Well, they either have bad voices or weak voices or they just can’t stay on key. Rap “music” I discount altogether. To my mind it’s just doggerel with a beat like reciting poetry and not music at all. The vocal deficiencies of these “artists” are mitigated by technicians behind the scenes who layer a weak singer’s voice to make it sound bigger and apply Auto-Tune to keep it on key. I don’t think there’s anything they can do for a truly bad voice, though.

So when Lady Gaga appeared on stage looking like Glinda the Good Witch of the North and opened her mouth to sing, I was amazed. I knew that Lady Gaga (Stefani Joanne Angelina Germinotta) had a real music background: she studied at NYU’s Tisch School of the Arts and the Collaborative Arts Project 21 (CAP21). That means she isn’t just a pretty woman with a mediocre voice, a good hair stylist, an aggressive agent and outrageous marketing. But I had never heard her sing—really sing—before and it was a revelation.

Her voice was rich and full, on key and powerful. She had breath control. She had effortless range. She could project. She was, in a word, singing the way we used to understand it. And it was wonderful.

Now, I’ll be the first one to admit that the teenaged me rolled my eyes at my father’s music. It was stodgy and old fashioned, slow and boring. It didn’t speak to the turmoil of adolescence when I wanted full-tilt boogie rock and roll. But I also have to admit that those singers knew what they were doing: Bing Crosby and Frank Sinatra, Johnny Mathis and Perry Como could all command a stage and deliver a song. Patsy Cline and Ella Fitzgerald, Judy Garland and Peggy Lee were the real thing. When they sang you marveled at the quality of their voices, what amazing things they could do with them, and how far they could take your emotions.

It was also understood that, to be a professional singer, you had to have the qualifications. That meant a good voice, broad range, good breath control, the strength to project, and the ability to stay on key. You could train your voice to do these things better but you had to have the raw material to start with. The singers of those days would have laughed at anyone who didn’t have a shred of talent yet wanted to sing professionally.

When Did It Change?

All this changed during the sixties and seventies and I track the shift back to Bob Dylan. He had been writing songs that were sung by other artists with good voices and groups that could actually sing. Then he started singing his own material and made “authenticity” more important than quality. I listened to his weedy, scratchy, nasal voice and found it appalling. I thought it was a fad, something that would fade away with time, but I was wrong. 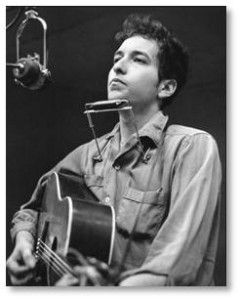 Carole King, who had been writing wonderful songs for other vocal artists for years, picked it up and others followed. Garage bands popped up that were barely competent musically, whether in playing their instruments or in singing. Acne-faced teenagers with a couple of guitars and a drum set could put themselves out there as a rock band without fear that someone would point out their vocal deficiencies. Talent and creativity were not required. We grew accustomed to hearing men and women shriek and howl instead of actually sing.

Granted, this is what my parents thought of rock and roll from the beginning but at least back then we had melody and lyrics. Nowadays, neither seem necessary. I realize that I sound like my parents but I suppose that’s appropriate given that I’m older now than they were back in the day.

Listening to layered tracks of Janet Jackson’s reedy little-girl voice was bad enough. Listening to Violent Femmes shriek “Blister in the Sun,” using volume to compensate for the fact that every note is flat is just torture. The invention of Auto-Tune by Antares Audio Technology in the nineties made things worse—much worse—because it overcame the worst, most egregious offenses of talentless poseurs who couldn’t stay on key. The Violent Femmes could have used Auto-Tune to save our eardrums, though.

So when Lady Gaga came out in her spun-sugar ballgown to sing a masterful medley from The Sound of Music it was a like a breath of fresh air on a mountaintop. I loved it. I wanted to stand up and cheer. Her soaring voice and songs that were written to make the most of such a voice combined to make the experience memorable.

Now I also want to listen to the album she recorded with Tony Bennett. That puts  Dad’s generation and my kids’ generations together via a singer who once wore a dress made of raw meat. Who’d a thunk it?