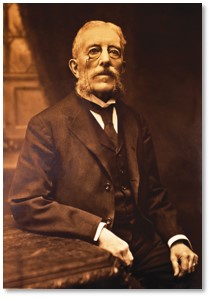 As I finish the last few pages of “The House at Lobster Cove” by Jane Goodrich, I find myself fascinated not only by a man, but also by the many homes in which he lived. This fictionalized biography traces the life of George Nixon Black Jr., known as Nixon, from his childhood in Maine to his adult life as a prominent, but reclusive, Bostonian.

Thanks to a family fortune earned in the lumber trade, Mr. Black had the advantage of immense wealth and was often the largest taxpayer in the city. He worked for his father’s business until he inherited the family fortune. After that, he lived a life of ease and philanthropy.

Mr. Black was born and spent his childhood in Ellsworth, Maine, where he often visited his blind grandfather in the ancestral home called Woodlawn. An excellent scene in the book describes the young Mr. Black observing the family business first-hand, At ice-out, the Union River’s winter icejam breaks up and the young Nixon Black watched skilled rivermen “herd” the logs that had been stored on the  ice downstream to the ships in the harbor.

He lived in a number of places, preserved one for future generations and built another that survived him by only two years. This summary of his residences includes one in Ellsworth and two in Boston.

Colonel John Black, Nixon’s grandfather, built Woodlawn, a Federalist-style made home of red brick with Greek Revival overtones, from a design from Asher Benjamin’s architectural book, “the American Builder’s Companion.” t went up from 1824 to 1827.

Now known as the Woodlawn/Black House in Ellsworth, this beautiful museum, park and garden served as home to three generations of the Black family. Mr. Black spent many summers here after inheriting the home. Together with his life partner, Charles Brooks Pitman, he refurbished and updated the house, which had sat empty for 20 years after the death of his aunt.

A thoughtful and generous man, Mr. Black bequeathed Woodlawn, along with all its original furnishings and collections, to the Hancock County Trustees of Public Reservations in 1928. Mr. Black’s will stipulated that, “Woodlawn, including the land, building, furniture, and pictures therein shall be kept as a public park.” Now anyone can visit the 160-acre estate that is located just a quarter mile from downtown Ellsworth.

Although Mr. Black never lived here, he noticed when the Federalist-style Tisdale House went on the market. Built in 1817 for Colonel Meltiah Jordan, the house was occupied by Seth Tisdale when Mr. Black was a boy. The novel gives him a reason for disliking Mr. Tisdale and he purchased the house to turn it into a public library for all the citizens of Ellsworth.

He commissioned his partner, Mr. Pitman, to design the renovations that would turn the home into a civic building. When the remodeling was complete in 1897, Mr. Black donated the building to the city of Ellsworth with the condition that, “The premises conveyed shall always be used as a public library.” It performs that function today. 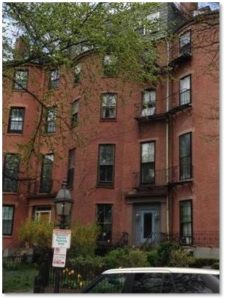 George Nixon Black Sr. moved his family to Boston and purchased 81 Mount Vernon Street on Beacon Hill as the new family home. Nixon lived here for many years with his parents and two sisters, Marianne and Agnes.

Located halfway between the Massachusetts State House and Louisburg Square, this five-story brick building on the north side got the full winter sun through its front windows. From their home at 81 Mount Vernon, both Mr. Black Sr. and Nixon walked to their business office on State Street when Mr. Black Sr. spent years expanding his business ventures.

Although neither father nor son could have imagined this, developers have since divided the house into 10 apartments. These units  retain the original hardwood floors and several units have the original marble fireplaces. The real estate advertisements promote the building’s “charm” but pictures show units that have been stripped of all the architectural detail that would have been de rigeur for a 19th-century upper-class residence.

Instead, the developers turned them into generic boxes with cramped galley kitchens, minuscule bathrooms and builder-grade appliances and cabinetry. Despite that, these units do not come cheap. Aa a friend of architect Robert Peabody and patron of the arts, Mr. Black would be appalled to see his old home now.

A year after his father’s death in 1880, Nixon moved the family to a new home at 57 Beacon Street, opposite the Boston Common, where he lived until his death in 1828.  Built in 1850, this six-story townhouse was, and is, an elegant building in a perfect location.

Time and development have treated this building far better. While it also has been broken up in to multi-million-dollar condominiums, the interior retains its architectural details, with large rooms, crown moldings, paneled wainscoting, and ornate mantelpieces. 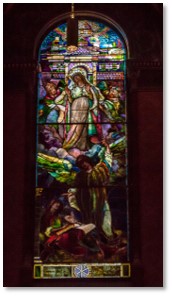 The Vision of St. John

In addition to the homes Beacon Hill, Nixon left the family name in the Back Bay. After the loss of his mother, Mary Elizabeth (Peters) Black and his sister, Marianne Black, Nixon Black commissioned a memorial window in Trinity Church. “The Vision of St. John Ieposolyma: The New Jerusalem.”

Although the window is beautiful, Mr. Black had some reservations about it because the design features a bride. Marianne Black had died young due to heart failure caused by scarlet fever. She loved and was loved by Richard Sears but they never married out of fear that she could not survive the rigors of childbirth.

The window is still on view in Trinity Church at Copley Square.

This is the big one – and tragic both historically and artistically. One of the great summer houses of the North Shore in Manchester-by-the Sea on Cape Anne, Kragsyde was designed in the shingle style by Nixon Black’s friend, Robert Swain Peabody of the architectural firm of Peabody and Stearns. Mr. Black paid $10,000 for the property, ($266,922 today). He purchased the land from a far-sighted real-estate speculator, the Rev. Cyrus Bartol, who had wisely determined that God made only so much waterfront property. 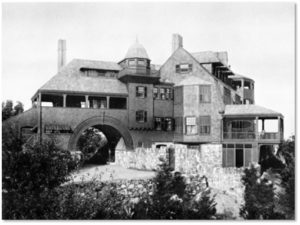 Roberts and Hoare, contractors, built the enormous structure from 1883 to 1885 for $60,000 ($1.601,629 today), It stood on a high rocky promontory overlooking Lobster Cove and the Atlantic Ocean. Frederick Law Olmstead designed the terraced grounds.

Nixon Black, along with Charles Pitman, his mother and his sister, Agnes, summered at Kragsyde from May to October every year for the rest of their lives, with the exception of two weeks a year spent at Woodlawn in Ellsworth.

Despite the beauty of the house, described as a masterpiece, and its setting, Kragsyde was demolished in 1929, two years after Nixon Black’s death. An early “tear-down,” the new owners replaced it with a stucco dwelling.

Reading “The House at Lobster Cove” will raise as many questions in your mind as it did in mine. For those of us who care about beautiful old buildings, the loss of Kragsyde leaves a hole. This book actually began when 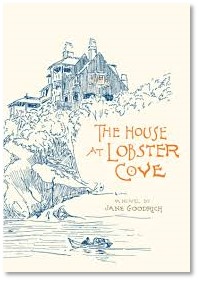 She and her husband, a master builder, responded by reproducing the home from its original blueprints. Constructed in a mirror image due to the site on Swan’s Island, Maine, the house is mostly complete. The audacity of building such a mansion by yourself on nights and weekends, reproducing a house designed by a renowned architect for a man with more money than some third-world countries takes my breath away.

But they did it. Many publications have documented the process and here is an excellent one from Yankee Magazine. For answers to questions of your own,  If you enjoy history and architecture, not to mention how the One Percent lived in pre-income-tax days, read “The House at Lobster Cove.” You will also meet a fascinating man who lived such a quiet and restrained life that most people have never heard of him. Oh, you’ll also discover why.

4 thoughts on “The Many Homes of Nixon Black”