I believe in creating my own reality—making my life what I want it to be rather than allowing life to happen to me according to what someone else wants or needs. That means working with the energy of the universe—or The Force, if you will. Sometimes the universe helps me to do this in ways that seem coincidental but really are not. (Sometimes the universe hides behind the kitchen door but that’s a post for another day.)

Yesterday and today provided me with two great examples of how you can make the Force be with you. First, let me say that I have been wanting to get one of those one-cup coffee makers because I sometimes like a cup in the morning but neither of us drinks enough coffee to warrant making a full pot. So I have been shopping around to see what the different models sell for, hoping to find a coupon, and dropping hints for Santa. I planned on getting the low-end model, which retails for about $120. Going through this process also broadcast messages to the universe, however, which proved to be listening.

Preparing for the Worst?

This morning I was in the locker room at the gym as a woman talked about training for a long bike ride. “The problem is that I’m a klutz,” Anne said, “and you can’t train for that. I keep seeing myself hitting a pothole and flying off my bike onto the road.”

I went over to Anne, put my hands on her shoulders and said, “If that’s what you picture, that’s what you’ll make happen. You need to feed yourself positive messages.” To show her what I meant I told her the story of the Sonus Networks 2011 Christmas party.

At the party, HR staffers were drawing names out of a bowl for gifts—some small and some quite impressive. I found myself thinking, “I never win anything.” I probably thought that to prepare myself for the disappointment of not winning but what I was really doing was creating a reality in which I did not win a gift. 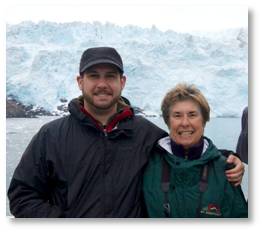 Morgan and me in Kenai Fjords National Park

It was a very nice gift indeed and we used it to visit our son in Alaska the following summer.

Anne was impressed and said that she was going to start thinking more positively. I left the gym and went to the coffee shop for a cup of hot coffee. At the counter there was a long line and I contemplated leaving but decided to stay and wait it out. As I waited, an employee came to re-stock the shelf next to me with bags of the company’s coffee. I smiled at her and she said, “You know, the company sent us a Keurig coffee maker to sell but instead of the low-end model, they sent us the big $250 one. We’re selling it for $99.

Sold! It’s in my kitchen and now I can leave a cup of hot coffee for Santa next month. 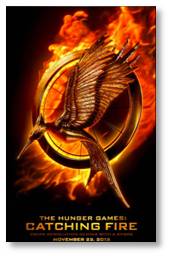 Last night, my husband and I went to the local IMAX theater to see Catching Fire. We thought we could get around the crowds by hitting the 4:00 show on a rainy Friday afternoon. Wrong! The first thing that we saw was a sign notifying us that every show that day was sold out. This was disappointing as we had both been looking forward to this movie and we wanted to see it in IMAX. But faced with reality we went to the counter to purchase tickets for another day. The ticket seller said that all shows on Saturday were sold out as well but then added, “I do have two tickets for the 7:00 show tonight. Someone just swapped them in for another day.”

It was only 3:30 and I was leery about hanging around that long but my husband reminded me that one should appreciate gifts from the universe. He was absolutely right. We took the tickets. We hung out in the bookstore for a while, then ate some dinner and returned to the theater in time to get good seats in the middle. (The movie is terrific. I’ll do another post on that later.) Instead of a disappointment, we had an excellent evening.

Did we make The Force work for us? I’ll just say that this is not the first time such “coincidences” have happened to us–and I don’t believe in coincidence anyway.  Let’s just say that positive thinking and creating your own reality usually work a whole lot better than preparing for the worst.