When I started giving bus tours of Boston this fall, I began to hear a question from my guests that I had never encountered before. At first, it startled me. But I heard it so consistently that I did some research for an informed answer. Here is the question:

“Where are your homeless people?”

Just FYI, the bus tour route goes from Boston’s Seaport District, where the cruise ships dock, around the waterfront and the North End, into the downtown area, around the Back Bay, and onto Beacon Hill. It covers several very different sections of Boston and lets me talk about history, the Revolutionary War, civil engineering, architecture, art, and a few Bostonians behaving badly. It’s very popular. 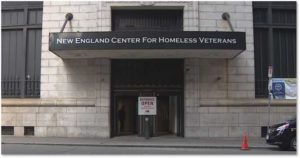 Now, you might argue that these locations don’t include homeless shelters. In fact, my tour route goes right past the New England Center and Home for Veterans on Court Street. No one notices it.

Boston has a long list of shelters. The list includes shelters run by the city, by religious organizations, by charities. etc. Some are open to everyone, some are restricted by gender, some are for families, and some are for victims of domestic violence.

The question from my tour guests surprised me for a variety of reasons.

What the Research Showed 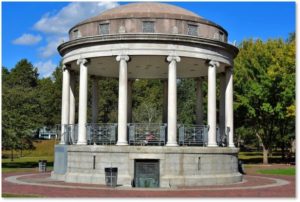 My research showed that, as expected, Boston certainly has homeless people. I see them at night after my ghost tours for Haunted Boston. Some take over doorways of buildings that have closed for the night. On rainy nights, homeless people often camp in the Parkman Bandstand on Boston Common to stay dry. I have also seen people under highway ramps in both Cambridge and Boston.

Many of the city’s shelters are located in the South End of Boston and I have heard that more homeless people can be seen on the streets there. The area around Massachusetts Avenue and Melnea Cass Boulevard appears to be a  problem. I don’t often go to the South End, however, so I can’t speak to that personally.

Looking at the numbers, I learned that, of the top 10 US cities with the largest homeless populations, Boston ranks #9. 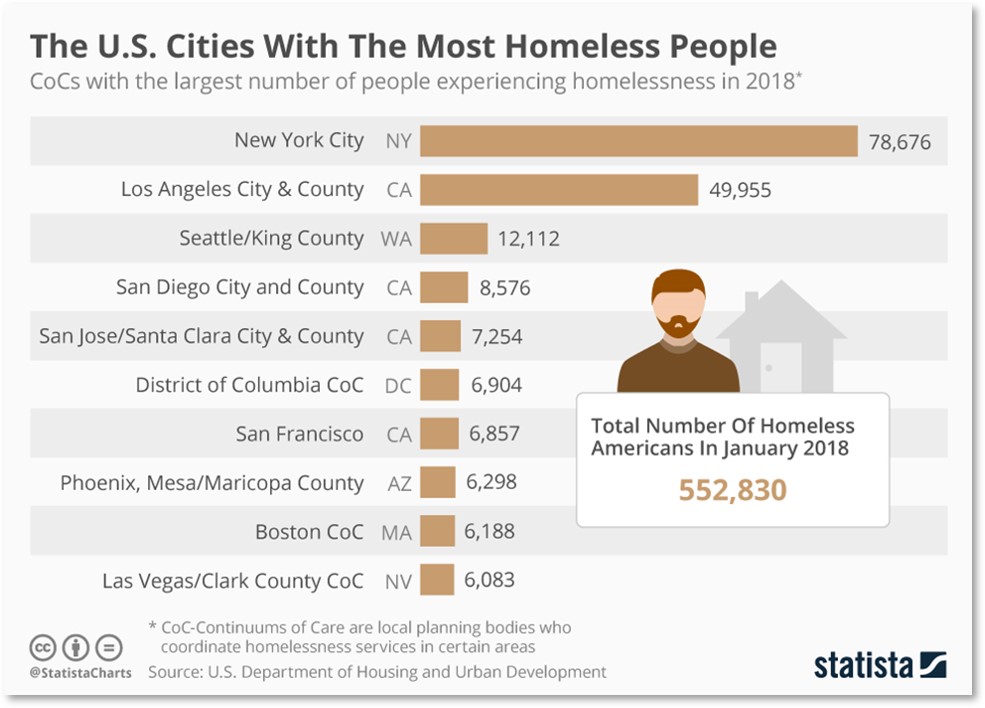 When you look at the numbers a different way, by percentage of urban population, the ranking changes.

On the Mother Jones 2018 homeless chart, Boston doesn’t even appear:

My Response to the Question

So, what do I tell people? I explain the numbers and talk about what I see on any given night. I also tell them Boston has shelters for the homeless. 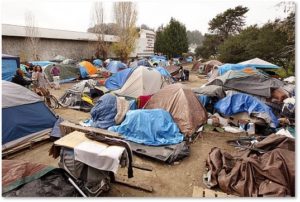 We all know, however, that many homeless people often avoid shelters because they are noisy, crowded, and lack privacy. A resident’s things may be stolen and some shelters can be dangerous. Many people prefer the freedom of the streets unless the weather is bad or the temperatures so extreme that they have to go indoors.

Also, however, Boston doesn’t have large encampments of homeless people and I think that’s what the visitors expect to see. Is that a good thing? Does the city provide more shelters, or more services than other cities? Also, as Jackie Quinlan pointed out last week, homelessness is a public health problem. Or is it a bad thing because Boston has no place or too much policing for such camps to collect?

Society Has a Homeless Problem

I don’t know the answer. Maybe someone else with more direct experience does.

What I do know is that our society has a problem if Americans from many different locations think that homelessness is normal, acceptable, and expected.