Recently I saw a recommendation on the Friends of Viking River and Ocean Cruises Facebook page to look around you when you are in a new town or city for extra activities, such as organ concerts. It’s good advice because scheduled activities don’t always include such things—or show them in their best light. 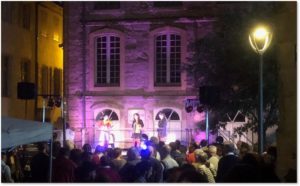 Sometimes, however, those special events just appear out of the darkness. That happened to us during our France’s Finest river cruise in June. On the night Viking Heimdal was docked in Tournon sur Rhône, I left the dinner table to go get my sweater.

On the way back, I went onto the sun deck to get a breath of fresh air. Turning toward the town, I noticed what seemed to be a festival going on. There were lights, music, people and dancing out there. It looked like fun.

I grabbed my sweater, went back to the dining room, and told our new friends at the table that we were missing a party. Nobody wanted to miss a party, so we all went out and took a look. Then we headed down the gangplank. 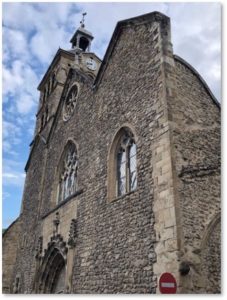 The church of St. Juilien in Tournon sur Rhône

After crossing a park, we came to the main street that runs along Tournon’s waterfront. It was rocking! Every bar and restaurant was open to the street and nearly every one had live music playing at full blast. We walked along the road, looking at the festivities and listening to local tune. The whole street was shining and decorated. Everyone was friendly and smiling, drinking wine and eating late dinners.

We turned right and walked through the crowd up to the Rue du Doux with the church of St.Julien at the corner, then kept going up to second square where people were dancing to another band. 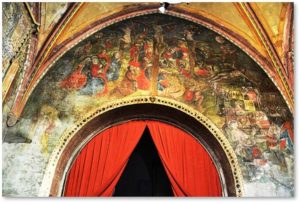 Frescoes over the doorway to the Chapel of Penitents

On the way back, we stopped into l’Église St. Julien, which was open and inviting. We went all through the church and spent some time examining the beautiful frescoes painted on the walls of the La Chapelle des Pénitents, the Chapel of the Penitents.  These images, commissioned by the merchant Thomas Arnier, were painted at the beginning of the 16th century (circa 1508). M. Arnier chose as their subject the cycle of the Passion, including a scene of suffering humanity helping Christ to carry his cross.

Outside again, we found ourselves watching a traditional country ring dance. Tournon is only a few miles north of Avignon. Most people know the French tune:

Dancing in a Ring

In Tournon sur Rhone, they were all dancing in a ring. People jumped in, danced for a while, and were replaced by others. Some people stayed and just kept dancing. We considered joining in but didn’t want to intrude on a local celebration. When the dancing stopped, we made our way back to Viking Heimdal, feeling that we had experienced something special. And we had.

Later, I learned that this was France’s mid-summer festival. We had stumbled upon it by chance, without doing any research, looking in a guide book, or planning ahead. That air of spontaneity made the experience even more special. 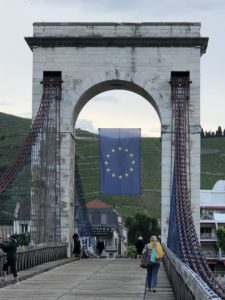 The town of Tournon sur Rhône looked more prosaic during our walking tour the next morning. It’s a good thing we saw the frescoes that night. During our walking tour of the town we returned to l’Église St.Julien but the Chapel of the Penitents was closed for Mass. Had we stayed on the ship the night before, we would have missed viewing the beautiful and historical frescoes.

Because we took a chance and went exploring, we had seen the town lit up, filled with music, and ringed with dancing. I’m so glad we did. these are the memories that make traveling so special: seeing something new and unexpected with good company.