Okay, I’m not done with this election quite yet. I have to do one more post because last week was filled with election ironies. To be fair, however, I sometimes find it difficult to separate irony from hypocrisy. 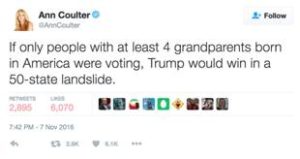 For example, the right wing extremist Anne Coulter tweeted: “If only people with at least 4 grandparents born in America were voting, Trump would win in a 50-state landslide.” Had that been the case, of course, than neither Melania Trump nor all but one of Trump’s children would have been able to vote.

See? Irony.  Here are some more:

Irony or hypocrisy, who can tell?

If anyone had tried to write a novel or make a movie like this, it would have been laughed off the market as absurd. But this is what you get when you hire people to run the country who don’t really believe that the country should run at all. 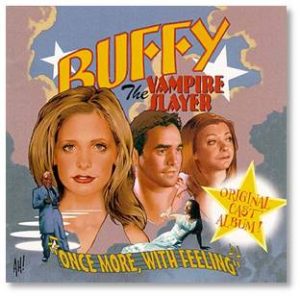 I wonder if the 46% of the American public that didn’t cast a vote because they were “too busy” or “it wasn’t for me” are second-guessing that decision now.  Interesting, but too late.

Buffy the Vampire Slayer said it best in their song, “Where do we go from here?”

But we’ll walk alone in fear. (Tell me)

Tell me where do we go from here.”