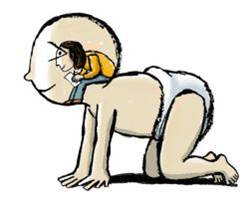 What is your earliest memory? When this topic comes up, as it sometimes does at a party or other social situation, most people tell me that they can’t remember further back than ages four to five. Having heard this response often, I am no longer surprised when a new acquaintance quantifies his or her first recollections in this way.

My first recollections, though, go back much further than those of other folks. I would like to share those with you, first to see if anyone else shares my peculiar neurologic recall capacity, and, second, perhaps to nudge some of you to meditate or otherwise concentrate in a way that helps you see through the mists of time and memory.

One of my earliest recollections is of a night in my crib. Something moved under the blanket, and I must have cried out because my parents came rushing in and snatched me up. As far as I know, I was not bitten, but the memory remained.

I do not know if this experience falls within what these days is classified as PTSD (Post-Traumatic Stress Disorder), but the fact that I remember this event year after year suggests something of the sort. I can tell you that, as a young boy, I never had a furry rodent of any kind for a pet. I did have turtles, though, and still have a fondness for them, and a small but evocative collection of what might be termed artisanal turtles.

You can imagine, though, that I was flummoxed when my son, from the time he was a very young boy, had an affinity for rats, hamsters, and guinea pigs. Now, that’s odd.

Chopin’s “Funeral March” just came on the radio. It is odd because, when the cat nailed one of my son’s pets, I shared his pain, but I was also relieved that we no longer had to help clean up after and feed and house a rodent. All dogs still love my son, though.

It Was A Dark and Stormy Night! 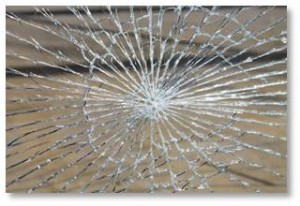 Another crib-time memory that remains to this day: During a violent thunderstorm, the window in my bedroom was blown inward! I can almost see the twisted frame and broken glass. My parents once again came to the rescue. They must have cleaned up the glass, but what I remember is my mother hanging a blanket over the gaping opening.

I Want A Neat Bombing Pattern!

My mother took me for some fresh air in my carriage. I lay on my back and gazed up at the empty blue sky. Suddenly, something filled my vision. I think it was a B-25 bomber. I did not identify it as such at the time, of course, but the configuration of the plane stuck with me. In retrospect, the plane was making a landing approach, flying quite low as it passed over my carriage and Chester Street in Brooklyn, where I spent the first three years of my life. 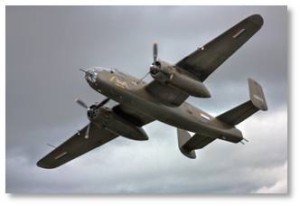 A related, although much fainter, memory was implanted around that time and several times in later years. I vaguely recall seeing a dirigible, or blimp. My mother told me that I was terrified of blimps. I would begin screaming hysterically, clinging to her for dear life. I do not recall this fear, but, floating somewhere just below active memory, is the image of a blimp.

Do I Want A Pony?

Our next-door neighbors on Chester Street in “Brooklyn and my parents tried to swap baby-sitting duties so the other couple could go out for an evening. It was a short-lived experiment. I remember being taken into their apartment. The first thing I saw was a big white-and-brown rocking horse. I think they sat me on the horse. What my parents indelibly recall, though, is that I started screaming as the door closed and didn’t stop until they returned. I guess I had abandonment issues.

Other snatches of recall, of which I can’t give as much detail, involve me stepping on as many cockroaches in our kitchen as I could while my mother washed dishes (You may have gathered that my early living quarters left a lot to be desired). Another, more painful, memory, involved an episode of what my parents thought was constipation and an enema. Ugh and Ouch!

You may or may not have been interested in these faint illuminations from my infancy and childhood. My hope is that, learning of the possibility of remembering, you may be encouraged to sift through the tangled detritus of your memories and find a meaningful nugget. Sharing it or not is up to you.