We learned all about cheese in two different countries on last month’s Viking River Cruise. (I know, I know. But I did say, I overscheduled us.)

One of the things I love about travel is learning both how things are made and getting the opportunity to actually do it. These days, experiences have more importance for me than things.

In past travels, I have picked nettles and made nettle risotto in Tuscany. In France’s Périgord region, I dug for truffles. Germany gave me the opportunity to make, cook, and eat Weiss Wurst. Now I can add cheesemaking in Switzerland to the list.

Going to the Source 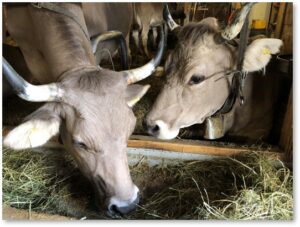 The “ladies” at dinner

It started with our pre-extension for the Rhine Getaway from Viking River Cruises. We visited a dairy farm where the “ladies” were still in residence before heading up the mountain to their summer pasture. For now, they were munching hay, which would produce “hay milk.” Once on the mountainside they would switch to grass and produce “grass milk,” which has a different flavor.

NOTE: By Swiss law, all farm animals must have access to the outside. There are no factory farms with animals imprisoned in tiny cages. The cows are happy, healthy, and treated like queens.

We got there right as the cows were having dinner and the noise from the cowbells was very loud. You can see and hear that here, although the bells had diminished by the time I took this video. With full stomachs, the cows were settling down to sleep. 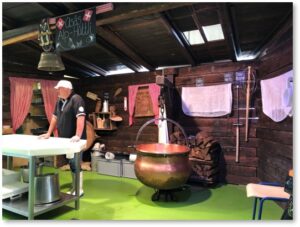 Having started at the source, we then moved on to the Milchmanufaktur, a processing plant that supports more than 60 alpine farmers. There, we learned the four components of most cheeses:

We were working with cow’s milk. I say “we” because we tourists did, indeed, take part in the process of making bergmutschli, – especially my husband. The company had a room set up to resemble the mountainside huts where cheese is made by hand during the summer. Those huts are where the man who watches the cows in their summer pasture works alone. If you like to be by yourself and you like animals, this is the job for you.

Separating the Curds and Whey 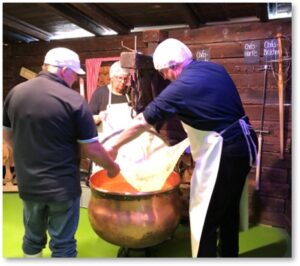 Lifting Out the Curds

Cheesemaking starts with separating the curds—milk solids—from the whey, which is liquid. Bacteria acidifies the milk, turning lactose, or milk sugar, into lactic acid. The rennet completes this task. The solids become curds, while the whey is removed.

Little Miss Muffet may have eaten both, but in Switzerland and the Netherlands, whey usually is fed to pigs. They love it.

The following steps involve stirring the curds and whey, then slicing the curds over and over into little pieces, The maker uses cheese cloth—what else—to remove the curds and drain the remaining whey from them. 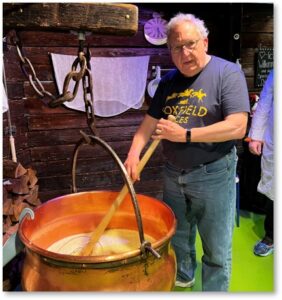 While I went with the rest of the group to tour the Swiss factory, my husband stayed with the cheesemaker to stir the copper kettle continuously. By the time we returned, the mixture was ready to be lifted out, drained, and slapped onto a board where it’s cut into large squares. We helped with that, along with taking the squares, squeezing them into rounds, and placing them into molds.

Once it’s shaped, the cheese goes into a saline bath to absorb the salt that will give it flavor, after which it’s stored on shelves to age.

We got to taste both bergkäser, the Swiss mountain cheese and, a week later, Gouda, Holland’s big golden rounds. The latter has a very different taste as it ages. New Gouda is smooth and creamy with a rich flavor, while two-year-old Gouda is crumbly and strong, like Parmesan. The workers turn the cheese rounds over every week as it ages. 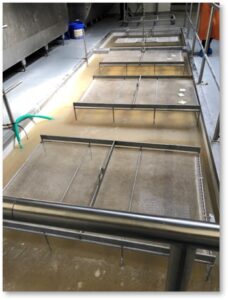 I would love to travel around a country like Stanley Tucci in Italy, watching the local foods being made and tasting gourmet delicacies. (I, too, can sample a mouthful, look happy, and say, “Wow” or “Marvelous.”) In fact, I managed to do that as we ate a fondue feast with bread cubes, yummy little roast potatoes, and a refreshing white wine.

Failing that, I enjoy getting involved as well as seeing first-hand how it’s done. Mind you, I’m under no illusion that the professionals demonstrating their skill think we tourists are making a serious contribution. I know this is a way for them to make more money for their real products. Who cares? It works for everyone.

Working on the Inside 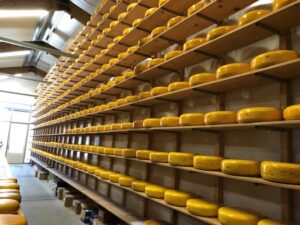 Traveling with a company like Overseas Adventure Travel or Viking River Cruises builds these experiences into the trip. Instead of being an independent traveler standing on the outside looking in, you can go inside and roll up your sleeves. Even if you don’t get a chance to participate, as in a winery, you can still learn the process and ask questions.

Plus, you get to taste the final product and that’s a bonus. Wow! Marvelous!