My friends, family, and colleagues know that I am a feminist. Those of the male persuasion might roll their eyes at the very thought. I have long been an advocate of women’s rights in a wide range of areas and I vote my beliefs.

So I was very dismayed yesterday to read an article by Eileen Pollack in The New York Times entitled, “Why Are There Still So Few Women in Science?” And then distressed to find one today in The Huffington Post that reports Chief Justice Antonin Scalia believes the Constitution doesn’t protect women against discrimination.Holy smoke. I thought we had made more progress than this in the forty odd years since I proudly voted to drive Emmanuel Celler out of the U.S. Congress. He’s the man who single-handedly bottled up the Equal Rights Amendment in Congress and he lost to the young Elizabeth Holtzmann.

Ms. Pollack’s @NYT article is long but I was eating lunch and had time to read the whole thing. It explores the reasons why women are, even in the 21st Century, discouraged from going into STEM jobs (science, technology, engineering, math), marginalized if they persist in doing so, and then discriminated against in terms of salary, resources, tenure, and opportunity once they have achieved advanced degrees. For anyone who is interested in the projected—and much-publicized—need for one million more STEM professionals than the U.S. is currently producing, this should be a wake-up call. You owe it to yourself to read it all.

“If society needs a certain number of scientists, Urry said, and you can look for those scientists only among the males of the population, you are going to have to go much farther toward the bottom of the barrel than if you also can search among the females in the population, especially the females who are at the top of their barrel.”

That makes perfect sense to me.I went through both high school and college at a time when discrimination against women was open, overt and unapologetic. I never wanted to be a scientist so I didn’t encounter the specific obstacles Mr. Pollack writes about, but I did want to take mechanical drawing in high school. I thought it was a pretty simple request but the administration denied me that class because it was for boys only.

Neither was I allowed to join the Projectionists Club, which was similarly reserved for those with a different anatomy. Yet on my very first job out of college, I had to show a movie to the Board of Directors of Dow Jones. I was only 22 and some experience before I walked into the room would have been very helpful. (I burned the first frame but after that, everything went fine.) Oh, and my high school guidance counselor also recommended that I take typing instead of physics. I have to give him that one. Typing has been much more helpful in my life and my career than physics ever would have been for a Liberal Arts major who went into Marketing.

Still, CEOs of major technology companies today lobby intensively for ever more H1-B visas so they can hire low-paid STEM-trained candidates from overseas. This at a time when women are being actively shut out of the majors—as well as the post-grad and post-doc opportunities—that would allow them to fill some of those millions of jobs that are coming down the pike. 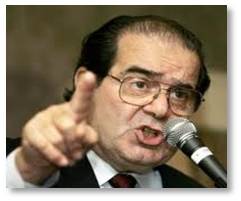 The @HuffingtonPost article by Amanda Terkel really blew me away, though. In “Scalia: Women Don’t Have Constitutional Protection Against Discrimination,” we learn that Justice Scalia really believes that “there’s nothing in the Constitution about that.” Well, there is the Fourteenth Amendment. It states,

“No State shall make or enforce any law which shall abridge the privileges or immunities of citizens of the United States; nor shall any State deprive any person of life, liberty, or property, without due process of law; nor deny to any person within its jurisdiction the equal protection of the laws.”

So I guess Justice Scalia (why does that sound like an oxymoron?) doesn’t think women are citizens of the United States.

The Fight Isn’t Over

Folks, it’s 2013. The 21st century. We resolved a long time ago that women are intelligent human beings, that we are citizens, that we can vote in elections and, in theory at least, that we should have the same opportunities for promotion and the same salaries as men who hold the same jobs. Why is it still so difficult?I didn’t think the fight for equal rights was over—not when far too many young women deny being feminists and look puzzled that anyone would even think they were. But I have two granddaughters and I want them to have more and better opportunities than I did with less anguish and turmoil than I endured to become a success.So I guess I’ll keep fighting—and voting. And when XX#1 and XX#2 are old enough, I’ll be talking to them about dignity and respect and being willing to fight for what they want in life, whatever that might be.