Things go missing in a city now and then. Mostly these items, regardless of size, are transported and stored or thrown away. Rarely does a city lose something as big and stationary as a park. 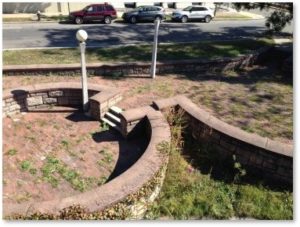 Boston has a lot of parks: big and small, compact and linear, waterside and dry, mostly well maintained with beautiful plantings and flowing fountains. One lovely park has left us, however. Oh, it’s still there, sort of, and in pieces. But there’s this big, whomping, concrete highway ramp sitting on top of it.

What’s left of Charlesgate Park looks like an afterthought: “Hey! Let’s put some paving circles, a few lights and a couple of benches under that ramp. That’ll do it.” When I first lived in Boston, I walked past this area and thought it was a wasteland. (To be fair, many Boston parks were wastelands back then.) I had no idea a real park, a beautiful riverside park, had once filled this desolate space. That information would probably surprise a lot of people today. 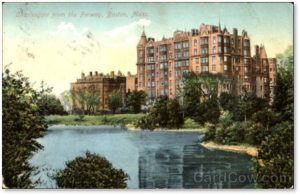 Charlesgate Park from the Fenway — Postcard

Frederick Law Olmsted designed Charlesgate park as the entryway to the Back Bay Fens, the first park he planned for the City of Boston in 1878.

The Back Bay Fens, part of Mr. Olmsted’s Emerald Necklace,  wrapped around the Muddy River. The Fens served as both a beautification project and a sanitary improvement because the water was stagnant and brackish. Mr. Olmsted planned the Fens to mimic a salt marsh environment. With the completion of Charles River Dam in 1910, high tides no longer surged up the Charles twice a day. Water quality in the Fens changed from brackish to fresh—more Charles River than Boston Harbor.

Charlesgate Park served as the “crown jewel” of the Emerald Necklace, connecting the Back Bay Fens to the Charles River. The residential neighborhoods of Charlesgate, Kenmore Square, and Fenway formed around this part of the park system.

By the beginning of the 20th century, however, the area looked entirely different. Boston suffered from multiple post WWII recessions that lasted, off and on, from 1948 to 1975. With the collapse of the maritime and textile industries, Boston’s economy slumped, property development screeched to a halt, and taxes went up. Many residents abandoned the city for newer—and cheaper—suburban communities.

They left some of the city’s once-elegant buildings abandoned and even boarded up. City fathers tried different methods to revive Boston’s prospects and they were willing to sacrifice some parts of the city on the altar of progress. As automobiles were seen as key to reviving the city’s fortunes, officials sought to bring more of them to Boston.

Storrow Drive, constructed in 1951, and widened from 1954-55, cut the Muddy River and the Fens off from the Charles River altogether. Quality of water in the Muddy River declined. The Massachusetts Turnpike Extension brought even more cars into Boston when it was completed in 1965.

Accommodating the desired influx of cars explains how the Bowker Overpass took over Charlesgate Park in 1966. Named for State Senator Philip G. Bowker (Brookline), this steel-beam bridge carries Charlesgate Street on a suspended deck over Commonwealth Avenue, Beacon Street and Interstate 90. It connects Boylston Street to Storrow Drive in a fast-moving traffic pattern that can confuse even locals. (Make up your mind fast, though; there little room for error.) 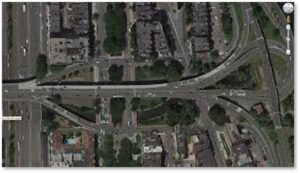 The Bowker Overpass parallels the Muddy River below and pretty much suffocates whatever is left of the original Charlesgate Park. Most people now see the park’s remnants as just highway landscaping underneath the overpass.

The area looks better than it did in the sixties but nowhere near as beautiful as it did in Frederick Law Olmsted’s original version. Some trees, grass and shrubs were planted to improve the former park’s sad appearance. But plants, people and other growing things do not thrive in the shadow of overhead traffic.

The Bowker Overpass over Beacon Street and the Muddy River — Courtesy of Emerald Necklace.org

Considered an eyesore for decades, the Bowker Overpass has generated may discussions about removing it and restoring the park. Two organizations support taking it down and creating an area that once again provides pedestrian-friendly access to the Charles River.

Cars and the New Boston 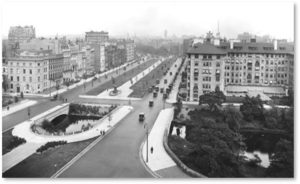 Commonwealth Avenue before the Bowker Overpass — Courtesy of the Bostonian Society

Boston is today a dynamic, prosperous, and rapidly growing city. In this atmosphere, it can be difficult to understand how the city could have replaced a park on the National Register of Historic Places with an ugly highway overpass. As I have said, however, the early 20th century was different time with a different economy. Cities bowed to the needs of cars, which were the wave of the future.

Do We Need a Small Dig? 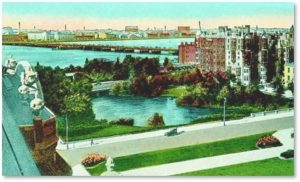 Charlesgate Park and the Charles River from the Braemore — 1920 Postcard

Will a Small Dig eventually take down the Bowker Overpass and restore the Charlesgate jewel to Frederick Law Olmsted’s Emerald Necklace?

Officials and residents have discussed this change for a long time with no action. I think the project needs a public champion, someone with stature and visibility, with power, and with a large public presence. The city has many people who fit that description from sports figures and actors to entrepreneurs, philanthropists, artists, and musicians. Would anyone like to step forward?