As always, the police hunt for motives to explain why yet another killer—almost always white, always male—has chosen to murder people he doesn’t know and then shoot himself. And for the umpteenth time we wonder at how one individual could have accumulated a stash of weapons and ammunitions, including illegal fully automatic weapons, that would be the envy of a Central American uprising.

Admitted to the Club 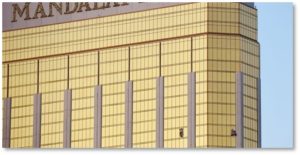 Overnight, the families of 59 men and women joined a not-so-select club: the surviving families of a gunshot murder. Another 527 people and their families are just beginning to cope with the physical, mental and spiritual impact of large-caliber bullets on unprotected bodies. My husband and I joined this club in 1993. Gun violence is not a theoretical issue or a philosophical matter to our family. Nor will it be for many of these families in the future.

I sincerely hope the injured people have health insurance because they only assistance they will receive from our elected leaders is—wait for it—thoughts and prayers. Victims of natural disasters like hurricanes and tornadoes get FEMA assistance and federal disaster aid. Victims of mass gun violence get platitudes and excuses. They say the words but I suspect they forget about the victims and minute the words leave their lips and I have never seen a picture of one entering a church to pray.

Our Congress has been castrated by the National Rifle Association, an organization better described as a corporate sponsor of terrorism. On behalf of the gun industry, the NRA buys our Senators and Representatives in two ways: with direct contributions and with ads they run to support the candidate who will keep the flow of guns moving.

In 2016, the NRA spent $27,000,000 to get their pro-gun friends in the Republican Party elected. In the same period, 33,636 Americans were killed by guns. That “price of freedom” as defined by NRA Executive Vice President Wayne LaPierre, is $802 for every dead American. Now you know how much you’re worth to the United States Congress.

When we decided that too many people were dying in automobile accidents, car manufacturers made them safer. The Congress passed laws to encourage or force them to do so. When we learned that cigarettes were killing Americans, Congress passed laws to put health warnings on packs, to ban cigarette commercials on TV, and to keep stores from selling “cancer sticks” to minors.

The High Priests of Gun Violence

The United States puts sanctions on countries that harbor terrorists and banks that keep the money flowing to them or launders money for them. Instead of sanctioning the NRA, our Congress takes their money and genuflects to Wayne LaPierre and his High Priests of Gun Violence.

What’s that you say? Terrorism requires a political, ideological or religious motive and these mass murders are perpetrated by individuals? Well, sometimes that’s true, but not always. You might want to ask the Las Vegas survivors whether they felt terror. And the PTSD that will haunt them for years doesn’t demand a motive. 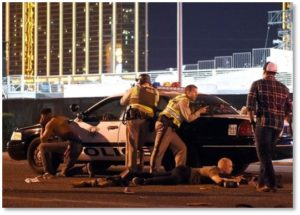 We are becoming a country in which ordinary, peaceful people are terrorized and murdered by white men without warning. They die when they are just going about their lives. Movie theaters, nightclubs, elementary schools, universities, political rallies, athletic events and now concerts have evolved from places of harmless entertainment to hunting zones for heavily armed nutjobs and (less often) jihadis.

Got guns? Want to use them? Hey, just look around. There’s sure to be a gathering somewhere nearby, so you can hunt human beings like characters in a single-shooter video game.

Protecting Ourselves from Gun Violence

My husband asked how he got all those guns into the Mandalay Bay Hotel. I said he probably put them into duffel bags and got a bellman to carry them on a luggage trolley. Nobody in a hotel is going to look through a guest’s luggage, not even when it looks, feels or smells like guns. In Las Vegas, he could be selling them, pawning them, displaying them at a gun show, or using them as collateral in a poker game. He could also just stroll down the Las Vegas Strip. You don’t need a license to buy a gun in Nevada and it’s an open-carry state.

Why should hotels do any of this? Because this country is awash in guns.

Our elected officials, who swear to protect the public interest, have no interest in doing so. They can get away with this because their constituents care more about “gun rights” than about the right to life, liberty and the pursuit of happiness. That’s in the Constitution, too. In fact, it comes way ahead of the Second Amendment.

BTW: Congress has metal detectors in place to protect their tender skins
from the kind of gun violence they give lip service to elsewhere.

Will the Las Vegas slaughter change anything? Probably not. The day we decided that first graders were acceptable collateral damage in the gun industry’s pursuit of profits was the day we abandoned any claim to being a civil society or a country of laws. As long as citizens continue to vote for politicians who make guns freely available to everyone, even the mentally ill, at any time and anywhere, our laws will not change. 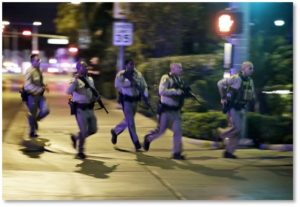 People will continue to buy guns for protection although no one at the Las Vegas music festival could have defended themselves with a firearm. And they will buy more and bigger guns to protect themselves from their own government at the same time they praise the first responders—government employees all—who put themselves in harm’s way to get civilians to safety. One lost his wife in the shooting.

No Logic to Gun Rights

No logic can defend this, although I know of at least one regular reader who will try. Louisiana Congressman Steve Scalise, who was almost killed by an crazy man with a high-powered rifle, still supports gun rights.

I would not mind if people who think the Second Amendment gives them a license to kill were the only ones being shot at. In fact, I’d be happy to put them all on an island and let them hunt one another.

The problem is that that they put rest of us at risk. And the rest of us get killed and injured far more often than do members of our castrated Congress.