I spent a lot of time in Arizona during my career—running sales kick-offs, reseller conferences and customers meetings. I spent time in many of the big resorts in Scottsdale and Tucson and, while it was pleasant to get out of New England for a week in the winter, my time away was nothing like a vacation. I was always working. 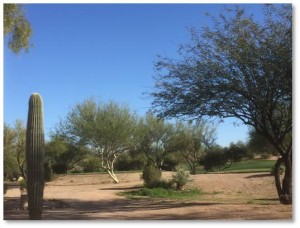 Desert morning from the terrace

Usually my job meant being on the go from 7 a.m.to 10 or 11 p.m. Sometimes I could leave the resort or conference center to run errands and make arrangements for meals and activities so I caught an occasional breeze and bit of sunshine. Once or twice I even made it into the pool—even if it was a moonlight swim. But mostly I spent that winter reprieve inside under artificial lights and breathing processed air.

I also didn’t have time to do things that I personally would have enjoyed far more than listening to yet more briefings by product managers unclear on the difference between technology and message, features vs. benefits, or salability instead of functionality. So last week I was determined to cross off some of the items on my “someday I’m gonna do that” list.

We started with the reason for our trip—spending time with our granddaughters while giving Mom and Dad a break. Once they went home, though, we could gear up for art and adventures in Arizona. We used our Marriott Vacation Club points to stay at the Marriott’s Canyon Villas at Desert Ridge so we had a pleasant and comfortable base of operations.

Our first stop was Taliesin West, architect Frank Lloyd Wright’s winter home and headquarters of the Taliesin Fellowship. We took a tour around the house and grounds with a very well-informed docent who clearly loved his subject. My Boston By Foot training has made me a much better judge of what constitutes a good tour guide and Jim was top-notch. Also, having read “Loving Frank” by Nancy Horan gave me a good insight into the human being behind the Great Man. I can’t say I much cared for that aspect of Frank Lloyd Wright but it was a big help to have some background information. 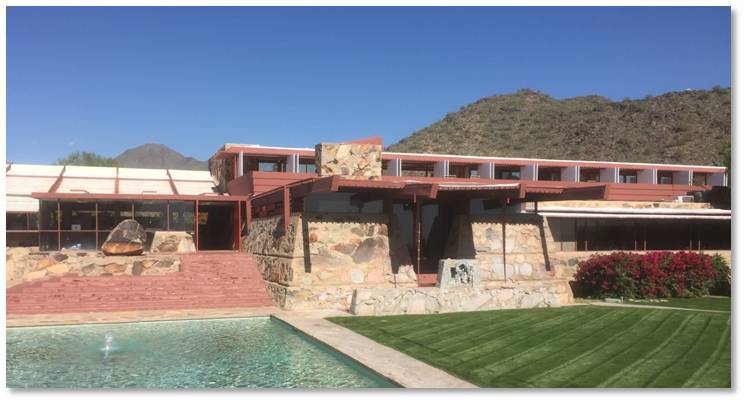 Another day we visited the Heard Museum of American Indian Art and History. Our original goal was the Phoenix Art Museum but that was closed on both Monday and Tuesday so we went up the street to the Heard. While much of their collection consists of crafts more than fine art, there are enough wonderful sculptures, paintings and murals for the Heard to make it on my life list of art museums. We took a docent tour but I wish that we had just cruised the collection ourselves. While we learned a lot about the native tribes from the docent, I would have preferred to focus on the art itself. Just sayin’. 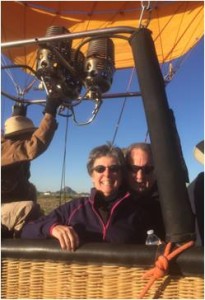 On Thursday morning we rose in the dark and went up at dawn in a balloon with Hot Air Expeditions. This is not something I really wanted to do as I’m not fond of heights and don’t even like Ferris Wheels. But Seth is a good sport about doing the things on my list so I had to go along. The company promised dislike of heights would not be a problem—and they were right! The ride is so smooth that you don’t ever feel like you’re up high or going to fall. It’s not even as scary as standing next to a window in a tall building.

We could see all the way to the Mogollon Rim of the Grand Canyon and down into Phoenix. And the volcanic origin of the region was immediately apparent from the air. From 10,000-year-old volcanic peaks and fumaroles to the lava bombs scattered everywhere, you could easily imagine what the Sonoran Desert looked like when it was being formed. In New England this geological record would all have been covered by underbrush and erased by weather but here it’s all out in the open. And then we landed to enjoy a fresh-air breakfast of mimosas, croissants, and quiche in the morning light. Tip: If you go up in a balloon, wear a hat—it gets hot when the pilot fires up those burners.

We drove up to Sedona to see the spectacular red rock formations in the valley and hike to one of the famous “vortexes,” spiritual hot spots that are clustered in the area. I felt the climb but not the vortex’s energy. Could the nearby cell tower have messed up the psychic flow?  I’ll never know. We also stopped at the Chapel of the Holy Cross, even though it was not on my list of things to see. But the chapel not only offered spectacular views of the valley, it also provided a wonderful serene place to sit and meditate. 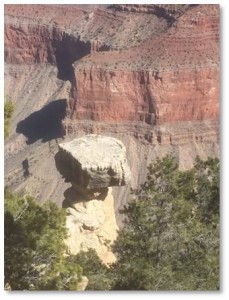 Hoodoo on the South Rim

Lastly we took a tour bus up to the South Rim of the Grand Canyon. This seemed like a huge extravagance given that we had a rental car and could have just driven. But it’s a loooooonnnng trip up there from Scottsdale and it was tiring just being a passenger. Besides, Mike, our driver and tour guide at Detours, knew a lot about nearly everything from one end of the trip to the other as well as the best places to see the canyon once we got there.

The Grand Canyon is, as anyone who has ever seen it will attest, mind-boggling. The scale of it is just too big for the mind to encompass. A man from the Netherlands was on our tour and he couldn’t get over not just the size but the depth. I was amazed that I could look down—way down—on a cliff that in any other place would have been a marvel in its own right. And from Lipan Point the Hance Rapid, a Class IV whitewater, was barely a ruffle in the distance.

On the way back we went through the Navajo Reservation and stopped at the Historic Cameron Trading Post where we picked up some native crafts. I love my new earrings.

Oh, and in between we did take advantage of the Marriott resort’s multiple pools and sit in the sun, just relaxing and reading. It felt so good to have warm sun on my face and smell the flowers and desert sage. One forgets what that’s like during the long New England winter. The resort also has several outdoor “living rooms” where you can sit in a comfy chair and enjoy the fresh air. I like the desert’s consistent winter warmth and lack of rain. Sure, the barbecue with sing-along Western songs was a tad corny but it was also fun. That’s what relaxing is all about—just let go and enjoy the moment. We had a lot of excellent moments in Arizona.