Something that Susanne Skinner said in yesterday’s post, “Where Are You From?” has stayed with me. “A surprising number of people do not have a sense of the size and cultural diversity of the United Sates. Some have a very narrow or specific view of us.”

I have also found this to be true. This misunderstanding—among Europeans in particular—sometimes causes them to snicker at Americans because we typically speak only one language—English—and stumble our way through just pronouncing words in other languages. They think this must be because we’re arrogant, snobbish, elitist, and too lazy to learn the languages of other countries. They assume that we insist the rest of the world speak English just like the British empire once did.

Actually, it’s not that at all. There are three simple reasons why most Americans speak only English, all of which derive from one simple fact.

Europeans live in countries that are small compared to the United States and they don’t grasp the fact that many of our states are as large as or larger than whole European countries. Why is this important?

Well, the easiest way to learn a language and to remain fluent in it is to hear it spoken and to speak it oneself on a regular basis. Europeans can grab their Eurail Pass and travel to other countries quickly, easily, and cheaply. In an hour, maybe less, they can hear and practice speaking a foreign language.

In the United States, this easy access is wishful thinking. Here are the three reasons why: 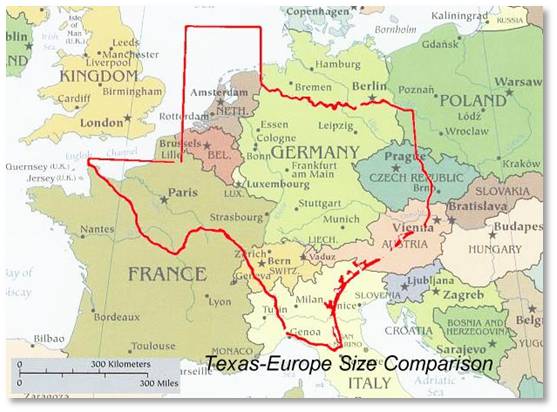 Through the Eyes of Others

There’s a fascinating Quora feed on “What facts about the United States do foreigners not believe until they come to America?” This interesting look at us through the eyes of foreign visitors includes the following answers regarding the country’s size and distance:

2. We share borders with only two countries. Our longest border (5,552 miles) is with Canada to the north and, thanks to the British Commonwealth, most people there speak English, too. Only in northeastern New England can an American drive across a border and speak a foreign language among the Francophone population of Quebec Province. (Parisians will argue that this language is not really French at all, but that’s their concern.) Mexico, to the south, does speak Spanish and Americans who live in states near that border (1,933 miles) have a much greater bilingual population. But that’s it. The rest is coastline bordered by the Atlantic and Pacific oceans and the Gulf of Mexico. The fish don’t talk.

3. Traveling to a foreign country is expensive. There is, unfortunately, no American version of a Eurail pass or Channel Tunnel that will take us to other countries. Neither can we step into a transporter or walk through a magic wardrobe. To get anywhere but Canada and Mexico, one must fly—and air fares are much more expensive than travel by road or rail. That means going to a foreign country is a once-in-a-lifetime trip for a great many Americans—and an impossible dream for many others.

But aren’t all Americans rich?  That’s another misconception thanks to Hollywood but, again, it’s not true. Most Americans are hard-working middle-class people who don’t have large amounts of disposable income to throw around. This is even more true following the Great Recession. If they do have travel money to spend, they tend to invest in something like a boat, a camper, or a recreational vehicle that they they can use frequently for the whole family. If people get to Europe or Asia at all, it’s for a couple of weeks only.

One doesn’t typically learn a foreign language just to use for two weeks out of an entire lifetime. Most people only need to speak English.

So that’s why most Americans speak only English. If you don’t believe me, come on over and drive from Maine to Miami. You will have access to French in the north and find people speaking Spanish in the south but, for everyone else in the middle, it’s all English all the time.