So many movies, so little time before the Oscars. Having said that, I must admit that we have no intention of seeing either Revenant or The Hateful Eight. Regardless of their merits as movies — good acting, good writing, good direction, good production — we just don’t enjoy films that the critics describe as brutal , containing gut-churning violence and “geysers of blood.” Who needs to wake up at 2 a.m. with pictures like that in their heads?

But we have been checking out the end-of-season, Oscar-bait offerings that do appeal to us and here is a 3-movie roundup of our choices. 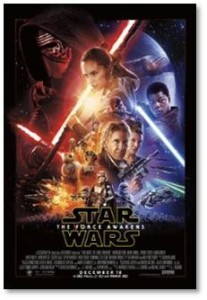 This is rapidly becoming the most profitable movie ever made in the world—ever. When all is said and done, SW: TFA will more than justify Disney’s $4 billion purchase of Lucasfilm. In just five weeks on the screen, it has generated $851,052,841 in revenue and it’s going to have long legs in the theaters. There’s a lot more revenue to come.

SW: TFA is also a bona fide cultural event, thanks to careful marketing, the hopes of millions of fans and a movie that turned out to be pretty good. I’m not raving about it, though.  And I didn’t pay a lot of attention to standard reviewers. As I have said before I take the opinions of mundane movie critics with a large dose of salt.

In general, however, I agree with David Brin’s review of @StarWarsVII. David Brin is a prolific science fiction author whose books have won multiple awards so he knows how to slip the surly bonds of earth and suspend disbelief. He enjoyed the film, as I did, but with this caveat:

“Sure, this flick was essentially a remake of A New Hope, punctuated with other borrowings. In fact, next time you watch ep.VII, try to count the number of scenes that weren’t homages to other SW flicks. Like Rey going underground to encounter the Force, the way Luke did on Dagoba.”

I won’t go into the supposed 40 Unforgivable Plot Holes in ‘Star Wars: The Force Awakens’ that Seth Abrams identified on the Huffington Post, nor the rebuttal to it by James Foreman on his Stuff I Wrote blog. (Warning: these articles contain spoilers.) I just don’t have that kind of time. I’m reminded of William Shatner’s famous Saturday Night Live skit when he tells a fan at a Star Trek convention to “Get a life.” 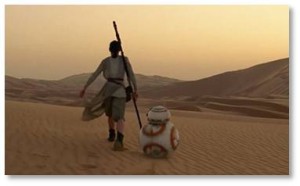 Star Wars: The Force Awakens is a movie, not the Rapture. Yes, it’s better than Episodes I, II, and III. No, it’s too derivative: not as original as it could have been or that I hoped it would be. But it’s a good start. Disney will take the franchise from here and, one hopes, make each subsequent movie better yet—more imaginative, more suspenseful, not as repetitive, and with great dramatic force.

Already Vulture is reporting that Episode VIII will be much darker, whatever that means. I hope it’s the difference between “A New Hope” and “The Empire Strikes Back,” which I and many others think was the best film out of all seven. I hope they give Rey more than one change of clothes and don’t make her go from a desert to a frozen planet wearing the same short pants and sleeveless tunic. Does she shiver in the snow? She does not..

Like other movies in a franchise, you will either see it or you won’t and your mind is already made up. It doesn’t matter what I say. But I hope you enjoy it. And this third chapter of the story gives us all a new hope.

Jennifer Lawrence specializes in playing strong women—possibly because she is one. She started on this path as the plucky teenager Ree Dolly in Winter’s Bone. This is an excellent film that never got the attention it deserved, probably because it was written and directed by a woman–Debra Granik. From there Ms. Lawrence moved on to the mutant Mystique in X Men: First Class, then Katniss Everdeen in The Hunger Games franchise, the widowed Tiffany Maxwell in Silver Linings Playbook and now Joy. 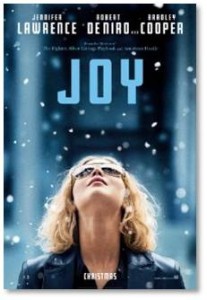 @JoyTheMovie, directed by David O. Russell and with a cast that’s becoming his regular ensemble, is not perfect. The beginning, which details Joy’s dysfunctional family and financial travails, goes on way too long. I was ready for a glass of wine by the time Joy cut her hair and got her mojo working.

But I did enjoy watching her grow and develop, especially since she starts as a beleaguered single mom who’s the only person capable of coping with life in a house full of takers, fakers, and breakers. Her determination drives her from a creative idea, to invention, to production and finally to a whole new life. You may get frustrated with Joy but you can’t help rooting for her.

In four weeks it has grossed $51,325,268 on a production budget of $60 million so it has a ways to go yet. We enjoyed seeing Joy and I recommend it to grownups who enjoy a good film about the triumph of the human spirit.

In one way, Concussion  is a standard sports movie: an underdog takes on a bigger adversary and overcomes great obstacles to win in the end. But it’s totally different in that all the action takes place off the field and few of the contenders are actual football players.This movie is based on the true story of Dr. Bennet Omalu, a Nigerian immigrant and holder of more advanced degrees than it seems possible for any one person to acquire. As a forensic pathologist with a special interest in neuropathology, he was the first person to notice the long-term results of repeated concussions in football players. (Although chronic traumatic encephalopathy had already been identified in boxers.) 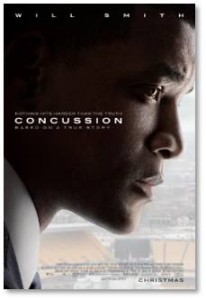 The opposition is not a Superbowl team of beefy players but the National Football League itself, an organization that, according to Dr. Omalu’s boss in the Allegheny County Coroner’s office, “owns a day of the week.”

The NFL has a lot to lose from the general public finding out that playing football can do major damage to the human brain and might turn you into a raging maniac, a suicide, or a vegetable in later life. They’re not worried as much about fans abandoning the sport as they are about America’s mothers deciding that football is too dangerous for their sons to play and thus bleeding the sport of upcoming generations of players.

Like many idealists, Dr. Omalu thinks that people will be grateful to receive this information and will take steps immediately to improve the situation. He’s totally unprepared for the NFL’s defensive line of lawyers, politicians, and influential people coming his way at full speed and ready to do whatever it takes.

#ConcussionMovie is an excellent film for a lot of reasons: it’s enjoyable to watch, you learn a lot, you get a look at the NFL’s dirty behind-the-scenes deeds, and you see how the truth can really set people free. In four weeks it has earned $32,942,230 on a production budget of $35 million and I think there’s a lot more to come. More importantly, some football moms might start thinking twice about what exactly happens to their sons under the Friday night lights.