I first heard about the Christmas Truce from my father. He wrote an article about it for our local paper many years ago and reminded me that 2014 marks the 100th anniversary of this story. It begs to be retold to remind us that it is possible for peace to prevail, not only in our hearts, but perhaps one day, in our world.

On December 7, 1914, Pope Benedict XV asked for a temporary suspension of the fighting during World War I for the celebration of Christmas. The warring countries refused. Despite the ban on an official cease-fire, on Christmas the soldiers in the trenches declared an unofficial truce. 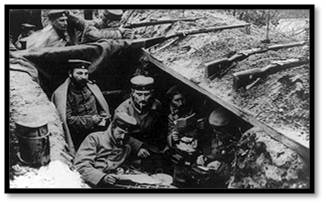 In defiance of the mandate, on Christmas Eve the sounds of rifles firing and shells exploding stopped and were replaced with the sounds of holiday celebrations and gestures of goodwill between men who had been, up until then, sworn enemies.

German and British troops sang Christmas carols to each other across the lines, and at certain points the Allied soldiers even heard brass bands joining the Germans in their singing. There are stories of caroling, barrels of beer, plum puddings and a holiday toast.

Their truce was unofficial and unsanctioned. Headquarters disapproved, and commanders on both sides took steps to ensure that it could never happen again. While it lasted, the truce led The Wall Street Journal to observe: “What appears from the winter fog and misery is a Christmas story, a fine Christmas story that is, in truth, the most faded and tattered of adjectives: inspiring.”

The so-called Christmas Truce of 1914 came only five months after the outbreak of war in Europe and was one of the last examples of chivalry between enemies in time of war. It was never repeated. Future attempts at holiday ceasefires were suppressed by officers’ threats of disciplinary action, but it served as proof that beneath the sound of weapons firing, humanity and good will could endure.

These soldiers did not expect to celebrate Christmas on a battlefield. What is remembered nearly 100 years later is that a war that killed 25 million men could not kill the Christmas spirit. At dawn on Christmas Day, German soldiers emerged from their trenches and approached the Allied lines across no-man’s-land, calling out “Merry Christmas.” In some cases these trenches were only yards a part.

At first, the Allied soldiers thought it was a trick, but seeing the Germans unarmed they climbed out of their trenches and shook hands with enemy soldiers. The men exchanged presents, sharing their cigarettes and food. There was even a documented case of soldiers from opposing sides playing a very competitive game of soccer, complete with referees and an authentic soccer ball. When the truce ended, the ball was found deflated and impaled on one of the pikes that ringed the trenches.

The ceasefire was also used for the retrieval of the bodies of soldiers who had fallen within the no-man’s land lines. The frontier was filled with unburied corpses, which British, French and German soldiers sorted through together. In some fields, joint burial services were held as a British chaplain and German divinity student read the 23rd Psalm. Men came together to bury the same soldiers they had shot just days before.

According to Captain J. C. Dunn, a medical officer in the Royal Welsh Fusiliers, Christmas Day was spent socializing and exchanging gifts between the two camps. Then:

There would be no further truce until the general armistice of November 1918. The majority of the thousands of men who celebrated that Christmas in 1914 would not live to see the return of peace. For those who did survive, the truce was something that would never be forgotten.

In those few hours, in the most heinous of all possible situations, there was peace on earth and good will toward men.

As we come to the close of 2013 I leave you with the words of Congressman Dennis Kucinich:

“Every year at this time, an important phrase marks the season: peace on earth and goodwill towards men. It’s so common we sometimes forget about what it really means–that we strive for a world without war, a society where we respect and help our neighbors, a place where we protect and uplift our most in need. This isn’t a phrase we should live by for one day or one month. It’s a set of values that must bond and motivate us every day.” 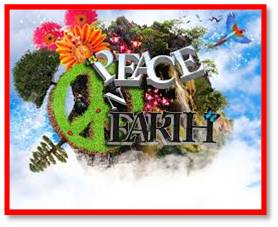 SK NOTE: I am on a blogging holiday, returning January 6th. My thanks and appreciation to Aline for sharing her blog with me and to you for being dedicated readers.