Susanne Skinner, our regular Monday author, is off today.

What do Doritos, M&Ms, Lucky Charms and Gatorade Frost Tropical Mango have in common? The all contain the food dyes Yellow 5 and/or 6.

Also known as tartrazine or E102, Yellow 5 is an azo dye. That makes it one of a large class of synthetic dyes whose molecules contain two adjacent nitrogen atoms between carbon atoms, such as R−N=N−R′. Azo dyes account for approximately 60-70% of all dyes used in food and manufacturing textiles. In theory, azo dyes can supply a complete rainbow of colors. Yellow/red dyes can be combined with blue/brown dyes to make new, very vivid colors and that makes them more common.

The Making of Yellow 5

Where does tartrazine come from? A German chemist named Johann Heinrich Ziegler discovered tartrazine in 1884. He investigated the new molecules that could be distilled from coal tar, along with any useful properties they might have. According to Wikipedia:

“Coal tar is a thick dark liquid which is a by-product of the production of coke and coal gas from coal.”

You will not find this substance on supermarket shelves.

Herr Ziegler made a great deal of money from his discovery as tartrazine was originally used as a dye for fabrics. Today, companies manufacture tartrazine:

“…using a diazo-coupling reaction between sulfonic acid diamine and pyrazolone T. This forms the azo linkage, that is the basis for the intense colors found in all azo dies.” Yummy.

Why is Yellow 5 Used? 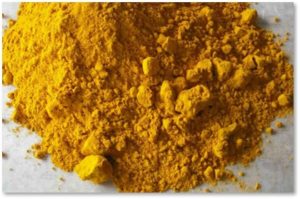 Follow the money. Yellow 5 is cheaper than food colors derived from natural sources, such as beta carotene and turmeric. That makes it popular with producers of processed food.

In my recent cruise through a local supermarket, though, I discovered that some of the most likely suspects have already replaced Yellow 5 or 6 with turmeric. Customers get a twofer with this because the bad ingredient was removed and replaced with one that has actual health benefits. Thus, foods like Kraft Dinner macaroni and cheese appear to be somewhat healthier than they used to be. More good news: this means companies are listening to customers who don’t want artificial stuff in their food.

The Problem with Tartrazine

Tartrazine has been associated with several physical conditions, from lowered sperm count to increased ADHD in children. Some studies have supported these claims while others seem to discount them. That leaves the safety issue unresolved.

Because azo dyes are highly water soluble, they do not accumulate in the body.  The liver metabolizes them and the kidneys excrete them. We would have to eat an awful lot to even approach toxic levels. An average adult person would have to consume over 100 kg of azo-colored food in a single day to reach a lethal dose.

But that doesn’t mean these dyes have no effect. The toxic side effects of azo dyes come mostly from their “degradation products” as they break down in the body. Several of these degradation products have been associated with mutagenic/carcinogenic effects. That means they may promote or aggravate cancer or mutations in the genes. Other consequences include:

Don’t confuse allergies and food sensitivities: they are not the same thing. Here’s the difference, according to WebMD:

Because it won’t kill you doesn’t mean you will have a pleasant experience. No one enjoys nausea, vomiting, diarrhea, or itchy rash, for example.

Yellow 5 appears to increase hyperactivity in some children who already hyperactive. A warning issued by the Food Standards Agency (FSA), the U.K. equivalent to the FDA, states that certain colorings, including tartrazine, can cause behavioral changes in children. These changes include loss of concentration and impulsive behavior that is hard to control.

One study of DNA repair found that tartrazine is not directly toxic to cells, but it did have significant genotoxic effects at all concentrations studied. That means it damages the content of cells and can cause mutations. The study determined that, while most of the damage could be repaired, some persisted even 24 hours after exposure. It concluded that prolonged exposure to tartrazine could trigger the genesis of a cancer.

Tartrazine has also been linked to the following conditions:

Banned in the EU

For all those reasons, the European Union requires special labeling for food packages that contain artificial dyes. Some countries have banned them outright. The U.S. Food and Drug Administration insists only that the dyes be included on the label. Labels identify these ingredients at the bottom of the list in tiny “mice type” that few consumers ever read.

Keep in mind that manufacturers include Yellow 5—along with other azo dyes—in many of the candies, snack foods, sodas and performance drinks that children consume in much greater quantities than most adults do.

The Bottom Line on Yellow 5

The bottom line is that Yellow 5 does not affect everyone—or affect everyone in the same way. Does it have an impact on you or your children? You don’t need a doctor or a scratch test to find out. Try eliminating any food product containing an azo dye from your diet. Then ask: 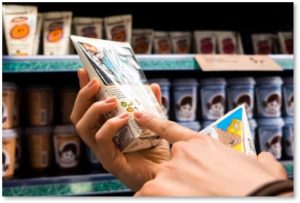 Taking this step requires reading food labels, something that I recommend in any case. Familiarize yourself with the effects of all the ingredients food processors add to make a product shelf-stable, improve shelf life, homogenize a beverage, add an umami taste, etc., etc., etc. Artificial ingredients deliver benefits for them—not so much for you.

When companies use Yellow 5 simply because it is cheap, they’re gambling your health for their profit. Are you willing to make that bet?

2 thoughts on “Yellow 5: The Textile Dye in Your Food”