“I look forward to being older, when what you look like becomes less and less an issue and what you are is the point.”  — Susan Sarandon 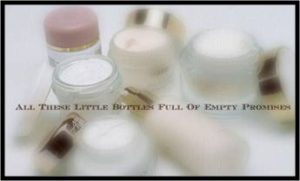 I think about wrinkles every now and then, when I see ads on QVC, when I look in the mirror. I see my face looking back at me, noting lines around my eyes and mouth and the funny ones between my eyebrows. I don’t wonder where they came from—I am a woman of a certain age. Like my gray hair they are part of me; a testimony to the years I’ve lived. I’m comfortable with who I am, and live in the real world when it comes to aging. My goal has always been to do it gracefully.

But vanity lives here, too. Wrinkle creams and their promises have a certain allure when you get to be my age. I’m not looking to turn back the hands of time, but it would be nice if I could cheat it just a bit. I’m curious about the claims they make, and the women who spend money hoping for nothing short of a miracle. Like crop circles and the alien autopsy, we want to believe there is science in what we are seeing.

In the United States alone, anti-aging cosmetic products have become a multi-billion dollar industry. It’s hope, in a jar.

The Science of Wrinkles

To fully understand how we age and what causes wrinkles, it helps to understand the anatomy of the skin. Once you do, you know without a doubt that only a plastic surgeon can turn back time, and even that has a statute of limitations. 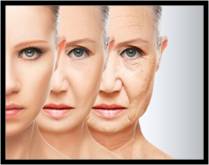 Collagen is the support structure that gives skin a firm, young appearance. When levels remain plentiful, skin looks young and smooth. When levels decline, that support lessens and wrinkles begin to form.

As a person ages, epidermal cells become thinner and less sticky, causing the skin to look noticeably thinner. The lack of stickiness also inhibits the skin’s barrier function, allowing moisture to be released instead of retained in the skin, causing dryness.

Numbers don’t lie, and the number of epidermal cells we have decreases by 10 percent per decade. As we age they divide more slowly, making the skin less able to repair itself quickly.

The effects of aging on the dermal layer are significant. Not only does it thin, but less collagen is produced. These changes in the structure of the skin cause it to wrinkle and sag. The sebaceous glands get bigger and the number of sweat glands decreases. Both of these changes contribute to dry skin that will begin to sag and wrinkle.

Then there’s the sun. A tan is the body’s response to injury from UV rays. Exposure to UVA and UVB rays from sunlight accounts for 90 percent of premature skin aging symptoms. Most of the photo-aging effects, including wrinkles and dark spots, occur by age 20.

The amount of damage the sun does to the skin is determined by an individual’s total lifetime amount of radiation exposure, as well as their pigment protection. People my age know we should have used more sunscreen.

For the record, there is no such thing as a safe indoor tanning device, and it is not an alternative to the sun. People who begin indoor tanning during adolescence or early adulthood increase their risk of getting melanoma.

The Lure of False Promises

If you’re skeptical, you’re not alone. A lot of topical creams promise age-defying results, bypassing expensive wrinkle-filling injections like Restalyne, Juva Derm, and Botox. But if they could deliver on these promises, they would be called drugs, not cosmetics … and they are cosmetics. 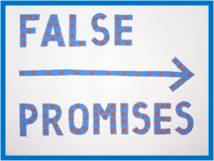 Botox injections range from $400 to $1200 each, depending on who injects them. Not all injections are equal or safe. It takes up to three weeks to see final results, and they must be repeated every four to six months to remain effective.

Some researchers believe that topically applying these same peptides to the skin might help it make more collagen on its own. This would have a “filling” effect similar to the injections but without the needle. There is no scientific proof that this is true.

While many over-the-counter products claim to offer anti-aging components they do not have enough of the ingredients to actually bring about a change in your skin.

Let the buyer beware. The American Academy of Dermatology says that over-the-counter wrinkle creams do little or nothing to reverse wrinkles. Claims that a product can change the skin’s structure or function by stimulating the production of skin-firming collagen are illegal.

The law doesn’t require cosmetic firms to register with the FDA or submit their products, ingredients, labeling or claims for testing and approval. All the agency can do is look for statements that cross the line and challenge them.

Some of these over-the-top claims have resulted in warnings to manufacturers who have since changed the wording on their labels and web sites. Recent recipients include Avon, Lancôme and Strivectin. 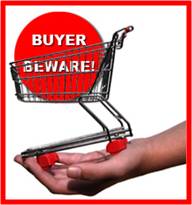 Some of the language FDA objects to:

Over-the-counter options range from a $20 drug store cream to exclusive potions costing hundreds of dollars each, usually sold in sets. There’s no evidence to suggest the most expensive versions have any advantages over the modestly priced options.  All of them will soften the skin, but none can reverse the aging process.

What Can You Do?

Wrinkle creams really don’t do much besides temporarily add moisture to the skin, so save your money and buy a good moisturizer. They can’t prevent wrinkles, but they can temporarily mask tiny lines and creases by increasing the water content in the most superficial layers of skin.

The best advice: Save your money.  Don’t smoke; don’t use tanning beds, and put on that sunscreen.

3 thoughts on “Wrinkle Creams: Hope in a Jar”