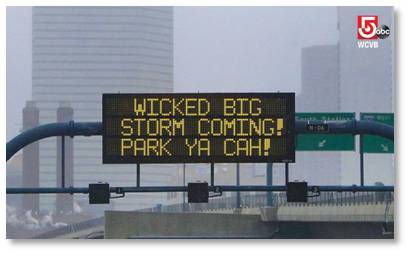 As I watch the snow from Winter Storm Juno blow sideways and the drift on my deck grow higher by the minute, I think of the lessons we learned from the infamous Blizzard of ’78. It’s amazing how different the world is now from what it was then.

In 1978 work was done in the office. People were expected to show up for work and stay in the office as long as possible. There were no laptop computers, cell phones, Skype, FaceTime, or even email. That come-to-work / stay-at-work mandate was a major cause of the transportation problems that ensued. People stayed too late and then got stuck on the highways as they tried to drive home. Even when the storm ended, plowing the roads took a long time because of the cars that had been marooned on them. The major highways were parking lots.

This time around people who went into the office left early. I saw typical rush hour traffic at 3 p.m. yesterday. Some people never went to work at all but simply declared that they were working from home and stayed in. For office workers, technology makes that easy and employers are much more likely to accept that decision because they know that people can be more productive when they can focus without office distractions and meetings. This does not apply to people with children, of course. Still, it’s better to take a snow day than to risk your life in white-out conditions.

Stay Off the Roads

Having seen what happened to the roads in 1978, government and transportation took a pro-active approach instead of waiting until the weather was bad. Governor Baker closed the roads to any but emergency vehicles at midnight. The T system shut down service. Airlines cancelled flights in advance to prevent people being stranded at airports and waived the fees for rescheduling the flights.

There are always unreasonable executives, of course, and some intransigent corporations have insisted that people come in to work. In doing so, they are demanding that their employees break the law. If caught and ticketed, that goes on the individual’s driving record, not the company’s. And it’s both unethical and callous to putting people at risk by insisting they drive in a major storm. Some people never learn.

Waterfront communities evacuated residents early—although there are always some folks who deny reality and decide to “ride it out.” It’s a nice thought but no amount of determination can keep the ocean out of your home when high winds and high tides drive it over the sea wall. Putting your own life at risk is bad enough but then the resisters expect to be rescued when the ocean floods in, risking other lives. It’s better to get out and stay out until returning is safe. 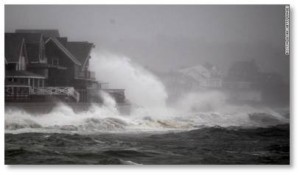 Ocean breaching the seawall in Scituate

National Grid also cut off power to at least one waterfront town to prevent a repeat of 1978 when downed power lines arced and sparked over the water like electric snakes. That started fires that could not be extinguished because fire trucks couldn’t make it through the flooded streets. Without power, staying warm and dry is another good reason to evacuate. Better safe than sorry.

Early warnings from the weather forecasters sent folks into supermarkets, hardware and home-goods stores to stock up on food, water, batteries, flashlights, candles and other supplies to get through a prolonged period of staying home and possible power failures. Even on Sunday afternoon, the supermarket meat section was picked clean when I went to get the pot roast that’s now in the slow cooker for dinner.

So we have learned and getting through this storm should be simpler and easier. The weather has also cooperated with light dry snow that isn’t sticking to branches and bringing down power lines. It’s nice to know that we can learn from our mistakes and that government can actually act to make people safer. We have things to be grateful for, even when the weather is bad.