Our job is to leave the world a little better than we found it.
Not the same, not worse…better.     ~ Gene Simmons 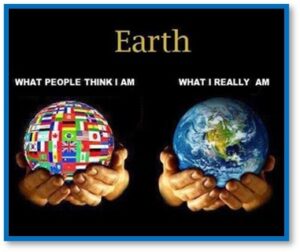 My husband and I are preparing to welcome our first grandchild next month, prompting me to think about the world she inherits and the world we leave behind.

When our children reach middle age, what will the world look like? Considering the political, economic and racial extremes of the past decade, my thoughts do not land in a good place. These radical changes have a profound impact on our world and if we don’t reverse their course, we have no one to blame but ourselves.

When I was seven months pregnant, I was on a London subway traveling to work. It was standing room only, and I was standing. Five minutes into the trip a woman likely the age I am now looked at me and said, “it’s been a few years, but I remember that feeling.” In that moment, her small gesture of kindness as I took her seat, meant the world to me. Her ability to see me and her empathy for someone she did not know remains in my heart to this day.

I try keeping the spirit of her generosity present by paying it forward and by making small but significant human connections. I strive to be that person but—and it’s a big one—it isn’t enough to wipe out the opposition.

We have forgotten how to see one another, losing sight of the differences and imperfections that make us human. The degradation of empathy and democracy, fueled by those perpetrating violence and hatred, has a chance of winning if we don’t turn it around.

I’m Just Here for the Gas

My recent experience at a local gas station is an ugly reminder of what that looks like.  As I was filling my car, an elderly gentlemen came out of the store, heading to the car parked at the opposite side of my pump.

He stopped by my car, standing way too close, pointing his finger and yelling, “You can thank your *$%& President for the cost of that gas.” Realizing a lesson in economics was not in anyone’s best interests, I told him, “I’m not here to discuss politics, I’m just putting gas in my car.” He replied, “Oh, you’re one of them and began an expletive-ridden tirade about election fraud, President Biden and Democrats, calling “all those like me $%^& Democratic whores.” I could feel his anger and my fear.

After politely asking him (twice) to step back I threatened to use pepper spray and call the police. Sidebar: I had no pepper spray and my phone was in the car. Thankfully, he drove away, still screaming and swearing at me.

This is Not Who We Are 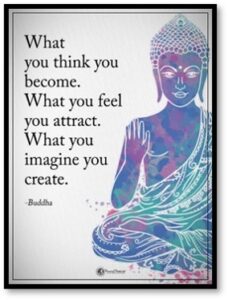 This is not who I am, and likely not who you are, but it IS who we are. As a nation, this behavior is all too common. His words and actions reflect the erosion of our democracy. He did not even know me, but I was fair game for his anger and bias when I did not respond in kind.

The recent shooting in a Buffalo supermarket that left ten people dead because of their skin color and a political gunslinger at a gas station are wake-up calls to who America is becoming.

We have the ability to make positive changes every single day. Becoming more accepting and open or more selfish and closed is a choice. Our choices affect those around us, creating the culture we live in and directing the course of individuals, corporations and government.

My grandchildren will live in a world that reflects these choices and more than anything I want them to be good ones. It is never too late to become the people we were meant to be.

“He does not see social conflict as something to be mediated and compromised, in the manner of the working politician. Since what is at stake is always a conflict between absolute good and absolute evil, the quality needed is not a willingness to compromise but the will to fight things out to a finish. Nothing but complete victory will do.”

The operative words here are social conflict. The behavior is not new. We arrived in this place a long time ago but the relentless onslaught of social media incites these behaviors to new levels of evil. It is about winning. The line between conspiracy and truth becomes too blurred to differentiate. 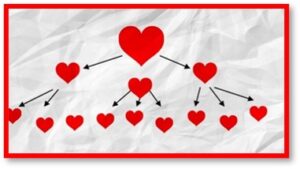 If you shop at Aldi, you know carts require a 25-cent deposit to unlock them. Last week, the woman next to me finished loading her car as I was pulling in and offered me her cart. She accepted my thanks but refused my quarter, telling me to pay it forward.

I took her seriously and passed the cart to a gentleman on his way in as I was leaving.  Honoring her request gave me a feeling of good—of playing a small part in paying forward a kindness worth much more than twenty-five cents.

This is how we put the broken pieces of the world back together.

We can all be that person—the one who says, “You go first, You only have a few things in your cart,” or “Let me help you with that, and “Please take my seat.”

We can smile at people and wait for them to smile back, thank them when they hand us our coffee and offer to pick up a toddler’s toy when it falls from the stroller. We should offer everyone who is thirsty a cup of water.

These are small gestures, but we remain each other’s best hope for a peaceful world.  Mother Theresa reminds us that “If we have no peace, it is because we have forgotten that we belong to each other.”

The Future of the Future 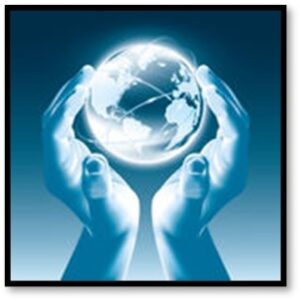 Ralph Waldo Emerson said, “To leave the world a bit better, whether by a healthy child, a garden patch, or a redeemed social condition; to know that even one life has breathed easier because you have lived — that is to have succeeded.”

In a world that distances itself from kindness, brief encounters wrapped in small acts of kindness are successes we leave one another. They are the dwelling place of the Holy, the Temple of our good intentions, welcoming us in with fleeting exchanges and inviting us to pay it forward.