My first season as a docent for Boston By Foot wrapped up last month and I enjoyed every minute of it. (If you want to know why we don’t give walking tours in the winter, check out this clip on a winter tour from the old Cheers TV comedy.) 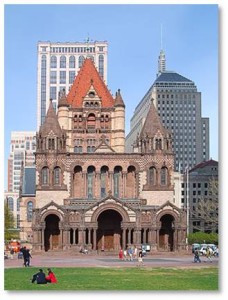 From the @BostonbyFoot training classes to going on educational tours, to giving my own tours of the Victorian Back Bay, I had a blast. When I look at a building now, I see it with an entirely different awareness than I ever could before. Street names that once seemed random now make complete sense. Architectural styles are clear. Historical characters have more context.

I’m looking forward not only to next year’s tour season, but to learning a second tour so I can take even more people around Boston.

What I Like About Being a Boston By Foot Docent

Well, I love learning things and knowing even more about the city that was first described by Governor Winthrop as a city on a hill, “with all eyes upon us.” Boston By Foot has given me a comprehensive grasp of one section of Boston from the glacial blue till below ground to the top of its tallest structure.

I also can allow the ham in my nature to show through. When I give a tour, I am the focus of attention and everyone looks to me for information and the answers to their questions. (Most of the time, at least, I have them.) I can tell stories and jokes, point out architectural details, surprise them with historical data, and teach them about unusual things they never imagined.

Finally, I get to share this beautiful city with people from many different places, from local towns and cities to other states and foreign countries. People have come on my tours from as close as Milton and as far away as Singapore. Some have enjoyed the Victorian Back Bay tour so much that they have taken other tours with Boston By Foot to find out about even more parts of the city. And vice versa.

Tourees ask a lot of questions, some of them just what a tour guide would expect and some quite surprising. Here are a few that I encountered:

A: A cloister is an enclosed garden, usually a square shape surrounded by covered walkways with an open colonnade facing the garden. The cloister at the back of Trinity Church has a walkway  only on two sides but the garden is beautiful.

Q: Is the bottom of Trinity Church’s walls darker because of a flood in the Back Bay?

A: No. Henry Hobson Richardson designed Trinity Church in a style now known as Richardsonian Romanesque. One component of this style is the use of multi-colored stone, a technique known a polychromy, and the dark stone layer at the bottom of the walls is part of that design. There was no flood in the Back Bay—after it was filled in and stopped being an actual bay, that is. 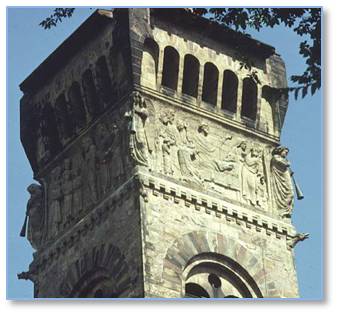 Frieze Atop the Brattle Square Church

Q: Did Bartholdi create the frieze before or after he designed the Statue of Liberty?

A: Before. Frederic Auguste Bartholdi modeled the frieze on the campanile, or bell tower, of the First Baptist Church (formerly the Brattle Square Church) in 1872. The Statue of Liberty was erected in 1886.

Q: Was anybody killed when the windows fell?

A: Miraculously, no. After construction of the John Hancock Tower, many of its 10,344 double-paned windows began to fall out. Even though they weighed 500 pounds apiece and the tower is 790 feet high, none of them killed or injured anyone when they fell. Eventually they were all replaced at a cost of $7 million (paid by the window manufacturer).

Interesting questions—and they kept me on my toes as well as on my feet. 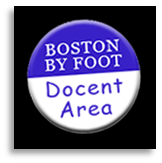 Now that the tour season is over, however, there’s still a lot to do. There are ongoing tours for us docents, and I’m planning to go through the old Nantucket Lightship on Saturday morning.

There are also books to read—and to finish. Periodically I complete another chapter of Gaining Ground by Nancy Seasholes, the definitive volume about how Boston increased its size by making new land. It’s a doctoral dissertation so it takes some concentration—and it weighs about five pounds. One of my tourees also mentioned a new book on the subject by two Northeastern University professors but I have not located that one yet.

Plus I have that second tour to learn. I’ll have no problem keeping busy this winter and, as we used to say about the @RedSox, wait until next year.