“Letters are among the most significant memorial a person can leave behind them.”

When was the last time you received or wrote a letter? How long has it been since you sat down with a piece of paper and a specific person in mind to write out your thoughts in a collection of words? The answer might be a long time ago. According to the post office the average American home receives one personal letter about every two months.

I worry that letter writing has gone out of style. The proliferation of computers, mobile devices and cloud services has usurped the hand written communication. It’s easy and convenient to send an email but it takes a certain amount of thought and effort to write and send a letter. I admit I fall prey to this convenience and blame it on any number of things: work, travel, other commitments, lack of free time, and even bad penmanship. The last one is, unfortunately, true.

A handwritten letter is a creative effort. It is both visual and tactile, with a certain amount of anticipation reserved for opening and reading it. It requires some uninterrupted time and a nice piece of stationary. Handwriting is a gift that cyber communication can never offer and it is a welcome nod to what is becoming a lost art.

A Forgotten Way of Communicating

In an age like ours, which is not given to letter-writing, we forget what an important part they used to play in people’s lives. A few generations ago the letter was the only way we had to communicate with one another. Letter writers were thoughtful and sincere. Certain parts of the day or week were dedicated to writing — notes, letters, journals and even household accounts. When you wrote a letter, you got a letter in return. 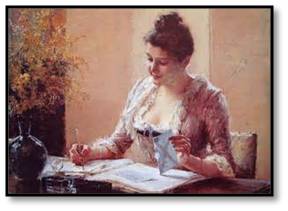 My friend Hazel is 88 years old. She sends hand-written notes on cards she illustrates herself. She’s from a generation that didn’t communicate by email and she understands the significance a handwritten note conveys. She knows her way around a computer, but she does not consider it a replacement for that which should be handwritten. I love getting mail from Hazel – when I read what she has written I can also hear her voice.

Last year our son was in Army basic training and I wrote him letters every week. Why? Because it was the only communication allowed. His cell phone and lap top were forbidden for the 16 weeks he was there. He wrote to me as well. I looked for his letters in the mail and felt my heart leap when I saw his handwriting. I read each one many times, and saved all of them.

But the truth must be told – if his cell phone had been allowed neither of us would have picked up pen or paper. I wanted to hear his voice and know immediately how he was doing. He barely had time to sleep; calls would have been so much easier. Because we could only write letters I have something I will always treasure, and I can’t re-read a phone call.

We live in the age of Facebook, Twitter and instant messaging. We post, chat and tweet but manage to say very little. We have learned to text each other in cryptic words and abbreviations. Emoticons have become substitutes for real emotion and we expect them to convey the depth of our feelings. Electronically generated correspondence has replaced the art of letter writing and the technology condenses us.

To new generations, letter writing is outdated – most never learned to write a proper letter and see no point in them. We live in the age of instant communication and gratification. We can certainly blame electronics but In the interest of fair reporting, it should be noted that in 1919 the Yale Review cast blame on the telephone, the typewriter, the telegraph for the demise of the hand-written letter.

History in an Envelope

In his 2013 book, “To the Letter: A Celebration of the Lost Art of Letter Writing,” The New York Times author Simon Garfield asked the question, “How will we be able to tell our history without letters?” Garfield believes that letters are becoming obsolete; stating the last letter will likely appear during our lifetime. It will offer evidence that there was a human connection while at the same time relegating the evidence to history. I really hope he’s wrong. 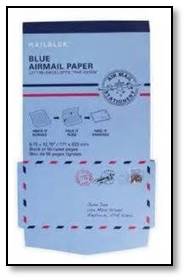 Several years after my mother died I found a packet of letters she saved. They were from my Grandmother, written during the Korean War when my mother was a Captain in the U.S. Army Nurse Corps. She was stationed at a Mobile Army Surgical Hospital (MASH) for almost three years. Letters were the only way she could communicate with her family.

The letters weighed almost nothing, written on the translucent, blue, air mail stationary that folded in on itself to create an envelope. When I went through them I discovered my Grandmother saved letters my mother had written her, and both were bundled together. From my Grandmother there were bits and pieces about life in the small Wisconsin town she lived in. She wrote of daily happenings; the weather, family updates and local news, always ending with a prayer for my mother’s safety.

In return my mother talked about life in a field hospital during the war. In one letter she wrote about a young Korean woman, brought to the hospital in premature labor. My mother delivered the baby and wrote “She was the most beautiful baby I have ever seen and we had no way to save her. She fit in the palm of my hand.” A little piece of history inside an envelope, preserved for 54 years in a cedar chest.

The writing and receiving of letters must endure for it will always offer something unique – something that modern technology can never provide. I feel about letters the way I feel about books. To me, holding a book and turning its pages as the story unfolds can never be replaced by an electronic device. The same is true for a thank you note or a wish for return to good health. Some things do not need technology to improve the experience. In fact, sometimes technology takes away from it.

When it comes to sharing our thoughts, hopes, profound congratulations or deepest sympathies, and even declarations of love, only words written thoughtfully and carefully on a piece of stationary will do. Once written, they become ours for all time.