Summer is one of the two great money-making seasons in the movie industry. This is when the studios pile on the tentpoles, blockbusters, action flicks, special-effects extravaganzas, space operas, superhero blowouts, animated attractions, and wannabe surprise hits. Sometimes it’s hard to keep up with the flood of films released between May and September. Having produced a crowded lineup this year, the studios vied for choice weekends, arranged releases to not compete with one another, and did their best to pull us into the theaters with offerings we just can’t refuse. So how have they done so far?

As usual, there are surprise moneymakers, astronomical failures, who’d-a-thunk-its, and movies that succeed because of the critical reviews—or in spite of them. In the charts below, the title is in red if at least one of us has seen it. 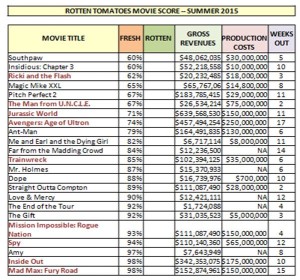 And here are the big failures: 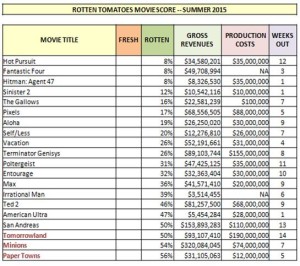 To no one’s surprise, certainly not mine, the movies that win are the ones that have good stories told well. Having said, that, I must admit that there are no other certainties and this is something that continues to create problems in Hollywood. They still take big gambles with millions of studio dollars on the premise that they can turn out a “home run,” a movie certain to make piles of money. But they want to do it with a “silver bullet,”—one thing that will deliver the hit—rather than overall good movie making. They put their chips on the table in the hope that A-List star, amazing special effects, a hit franchise, a screenplay based on a best-selling book, or another dip into the retro chest of favorite toys and TV series will do it for them.  And does it? Well, it depends.

Big Stars: A bankable star like Bradley Cooper can help drive a so-so movie like The Hangover to big profits and pull audiences in to an oddball romance like Silver Linings Playbook. But he tanked in Aloha. Just check the Rotten Tomatoes score and you’ll see why. Even a popular actor, leading man and rising star can’t turn a turkey into a goose that lays a golden egg.

Big ego with a bird on his head

Retro TV: Mission Impossible was the TV series that morphed into a goldmine on the big screen. Some of the other series that followed in its wake succeeded. The Man From U.N.C.L.E. is also looking to do well this year. But The Lone Ranger tanked two years ago because it was a bad story told badly—very, very badly. Sentimentality is no guarantee of a good product, especially if you take shortcuts or build the movie around a big ego.

Franchises: Some franchises do well—at least for a while—while others flame out after one or two movies. I would have thought the Terminator franchise would go on forever regardless of quality. But this year’s muddled mess with a 26% Rotten score flamed out at the box office. Even the fans and fanboys drew the line at plunking down their money to watch it after bad word of mouth got around. Jurassic World did well because it was an entertaining movie despite the stupid shoes and it pulled the franchise out of the derivative hole it had dug itself into. Mad Max came roaring back after a 30-year hiatus with a new non-stop, molto-decibel chapter. Good movies can create a franchise overnight and bad ones can kill it even faster.

Special Effects: This is a big trap for science fiction movies. High-quality SPFX can turn a good story into a great one. On the other hand, science fiction that’s all effects and no story will drop at the box office like an asteroid into the Pacific. On the list above, Tomorrowland was a good example of a movie that was all special effects and a stupid story, even for the children’s market. (How dumb do they think kids are these days?” Earlier in the year, Jupiter Ascending grossed only $183,887,723 on a production budget of  $176 million. That’s barely enough to cover the marketing costs. Criticized as being “narratively befuddled,”—an excellent description of a bad story—it had a 25% Rottten score on the Tomatometer.

Superheroes: The Marvel roster is doing well on both big screen and small but Fantastic Four succumbed to inarticulate movie making. To explain its abysmal 8% Rotten score, Rotten Tomatoes described it as, “dull and downbeat . . .  a woefully misguided attempt to translate a classic comic series without the humor, joy, or colorful thrills that made it great.” This sounds like “play it safe” film making and that never makes for a good product. The other factor is superhero fatigue. What may be forgiven in a film that’s one of a kind will be pummeled in yet another movie with yet another man in tights and yet more cities being demolished by yet another two-dimensional villain. 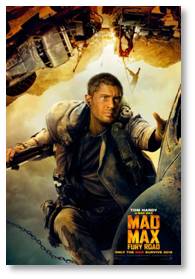 It should be pretty clear by now—although clearly it is not—that a good story is the backbone of a good movie. If you want to see where the big money has been made, just look at the chart of movies with high ratings. After that, it’s all execution. How could this still be a puzzle to the Hollywood studios after so much time? How could they continue to look for the silver bullet or the home run that will line their pockets with gold when the answer is right in front of them? Just get a good story and tell it well. Then sit back and watch the tickets sell.