Given our track record here on Mother Earth, it comes as no surprise that we are now polluting “near space” with our trash. Although we can’t see this from the bottom of Earth’s gravity well, the planet is currently surrounded by millions of pieces of “space junk.” These range in size from tiny paint flecks to massive booster rockets. 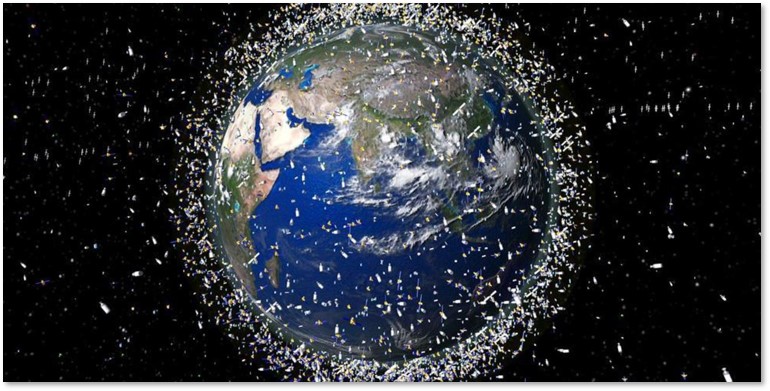 Large devices like dead satellites and rocket parts collide and break up into smaller pieces, which crash into other pieces, etc., creating more and smaller pieces of junk. The tiny fragments become increasingly difficult to track and avoid.

More than 500,000 of these pieces of debris are big enough to damage a working satellite or the International Space Station. They all travel at 17,500 miles per hour—seven times faster than a bullet. If you want to know what happens when debris moving that fast encounters the ISS, just watch this opening scene from Gravity.

So much junk is out there the Department of Defense maintains an up-to-date catalog of the 23,000 objects in earth orbit that are larger than a softball. Some 14,000 of them are uncontrolled. Scientists estimate that there are more than 100,000 pieces of orbital debris between 1 cm and 10 cm. And tens of millions of pieces are smaller than 1 cm.

If you’re consoling yourself by thinking that these objects will just lose velocity and burn up in the atmosphere, know this: approximately one piece of debris falls to earth every day. One piece. Some will stay up there for hundreds of years. Objects in higher orbits, where geostationary satellites live, may persist for thousands of years.

Gravity alone won’t save us and NASA doesn’t have a Vroomba that they can send into orbit to clean up the mess.

NASA has actually calculated the amount of space junk by counting the dents on the Space Shuttle when it returned from a mission. That’s like estimating the number of insects in an area by counting the splats on a car’s windshield—only much, much more dangerous.

Han and Chewie in the Debris Field 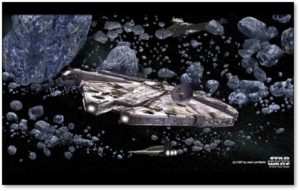 Just imagine the Millennium Falcon approaching Earth. Before Han Solo and Chewbacca can swoop down and land, they have to navigate their way through a swarm of dangerous particles without benefit of a map to warn them where the big pieces are or a deflector shield to ward them off. Here’s what the cloud of space junk looks like when seen from outer space.

NASA has avoidance protocols to protect astronauts on the International Space Station from a collision with a dangerous piece of debris. Basically, they hide in the Soyuz Capsule. That is what George Clooney’s astronaut, Matt Kowalski, is attempting to implement in Gravity when the debris cloud hits.

Three countries have put the most space junk into orbit: Russia (4,994), the United States (4,684), and China (3,601). China’s number would be much smaller but for an anti-satellite weapons test they conducted in 2007. In this test, they blew up a satellite, thereby creating 2,317 pieces big enough to be tracked and 35,000 pieces bigger than one centimeter. Way to go, China! 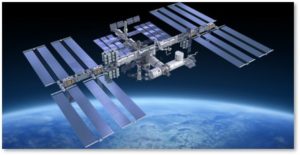 But wait, there’s more. NASA plans to decommission the International Space Station in 2024. When that happens, it will likely be sent to—wait for it—the spacecraft cemetery.

This a single spot in the Pacific Ocean, 3,000 miles off the east coast of New Zealand, that currently “houses” 263 spacecraft from four nations that have been intentionally crashed there. Why? It’s two miles deep and the one place on earth farthest from any land mass.

Our definition of not doing any damage, you see, means any damage to human beings or, more generally, land-based creatures. The denizens of the Pacific Ocean might have a completely different concept of damage. 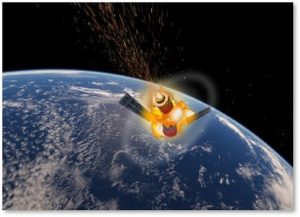 When China’s Tiangong-1 station fell into the Pacific Ocean this spring, it contained large amounts of hydrazine, a toxic and corrosive chemical. The media warned people not to touch any debris they might encounter floating on the surface. Sea life received no warning.

The ISS contains ammonia, bacteria, heavy metals and other substances not suitable for consumption by whales, dolphins, squid, sharks and other marine life. But it’s going to sink out of sight, so no biggie.

This reminds me of how we treated our waterways in the past, dumping toxins, chemicals, sewage, and garbage into them because the junk would vanish downstream, go out with the tide, or sink to the bottom.

Once we couldn’t see it anymore, we assumed that it couldn’t do any damage. Except that we did have those pesky typhoid epidemics, cancer clusters, and fish kills. What do we get when NASA crashes orbital junk into the depths of the ocean?

Forget meteors, bolides, comets or other natural threats, our biggest problem is one we created ourselves. Whether in space, in the oceans, on land and on mountaintops, we have turned Mother Earth into a trash dump. And we have no more idea how to fix it than we have to clean up any of our messes, high or low.