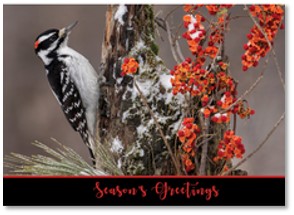 I used to love Christmas cards—both sending and receiving.

As the Catholic half of a mixed marriage, I avoided overtly religious cards. Instead I bought pretty ones, usually from the National Wildlife Federation with gorgeous pictures of our world and the animals that live on it. I liked knowing that my purchase would help to fund conservation efforts and usually included an extra few dollars. In this way, I celebrated Christmas through the beauty of God’s creation.

Christmas cards kept us all—friends and family—in touch; we might not call or write frequently but we could always catch up at Christmas. For that reason, I looked forward to reading everyone’s holiday letter summing up their year. We began writing ours in 1994 for a less happy reason. People wanted to know what was happening with the trial of the men who murdered Seth’s brother and the obvious solution was to write one letter instead of multiple notes on cards.

I tried to lighten up our letters, outside the grim part, by not taking ourselves too seriously and making the letters funny. This must have succeeded because one year the local newspaper, The Sudbury Town Crier, did a story on our Christmas letter.

The Introduction of Christmas Cards 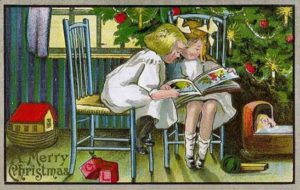 As I wrote in a previous post, a Boston chromolithographer named Louis Prang introduced Christmas cards to the United States in 1874. Back then, people communicated in writing and not to answer a note was considered impolite. Christmas cards gave people a way to say “Merry Christmas,” or respond to a previous note with holiday greetings.

Giving and receiving Christmas cards quickly became part of American culture and seven years later his company was printing five million cards a year. Mr. Prang. known as the “Father of the American Christmas Card,” even ran a competition for the best designs and recruited famous American artists of the day as judges.

Over time, cards went from simple postcards to “book” cards and photography was added. Famous people designed cards and charities like the National Wildlife Federation and UNICEF designed their own cards. When I ran marketing communications for high-tech companies, we often designed corporate cards—giving our art directors more opportunity for creativity than they often got during the year.

Part of the Holiday Decorations 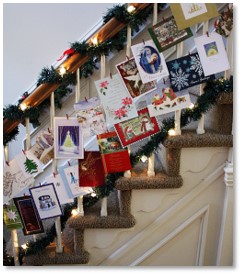 Not my stairs, but similar

Christmas cards contributed to my holiday decorations. At work, I taped them to the outside of my office door. At home, I hung them along the stairs and they made long rows going down the balusters. Christmas cards came in all sizes and shapes: vertical and horizontal, large and small, simple and complicated. They glowed in gorgeous colors, sparkled with fake snow, and twinkled with gold and silver foil.

I enjoyed every part of getting Christmas cards. (Sending them was less fun but I got it done.) I liked taking them out of the mailbox, opening them, and watching the year’s collection grow on the staircase.

As children, we would collect the cards after New Year’s and give them to the nuns at our parochial school, who would use the images for projects.

Over time, the blizzard of cards dwindled to a flurry and now I get only a few. Why? I have five reasons: 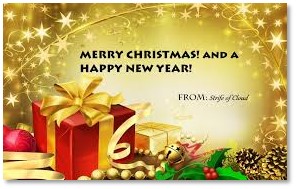 An e-card from Strife of Cloud

Now I receive only a few cards from immediate family. While I can certainly put cards up, there seems little point in doing so. It makes me sad.

In a few more years, a new generation won’t know what Christmas cards were and, after an explanation, will think them a cute anachronism. We can’t stop progress, even when it makes our holidays a little less pretty and our Christmas a tad less bright.