On Sunday I celebrated the Christmas season by participating in Sudbury’s 41st Annual Messiah Sing at the beautifully decorated Memorial Congregational Church. I looked forward to doing it but I also had some trepidation. Although I had joined in the event before, I had not sung Handel’s “Messiah”—or much of anything at all—for a long time. For many years I had a conflicting activity on that date and then I took some medication that had the unfortunate side effect making my voice crack and break uncontrollably and unpredictably. This year, for the first time, I had no conflict and my voice was back in shape.

The Messiah Sing is a voluntary event with no audience. There are musicians, a conductor, four soloists and a chorus divided into the four vocal groups. We sing or play because we enjoy it and there’s no pressure, just a lot of fun.

I learned to sing four of the choruses from George Frederic Handel‘s “Messiah” in the Mixed Chorus at Somerset High School. This never struck me as unusual until I was an adult and someone asked me where I had sung it. When I said that it was in high school, her jaw dropped in astonishment. But, then, she didn’t know our visionary music teacher, Paul Gazaghian. He drove the music program at what is now #SomersetBerkley Regional High School before it was known as “Musictown.” We learned “Messiah” for the concert that was called Christmas Vespers, now just plain Vespers.

Not The High Point

I am not one of those people for whom high school was the high point of their youth. Mixed Chorus got me through those four years and I rarely missed a practice. (If you were late, you were out of luck because Mr. Gazaghian closed the doors 15 minutes after the starting time.) So it was a wonderful experience on Sunday to sign out a score and join the other ladies in the Soprano section of the chorus.The instrumental introduction to four of the choruses took me right back to the risers in the old gym, standing next to Ginny Gotham and rehearsing over and over again. 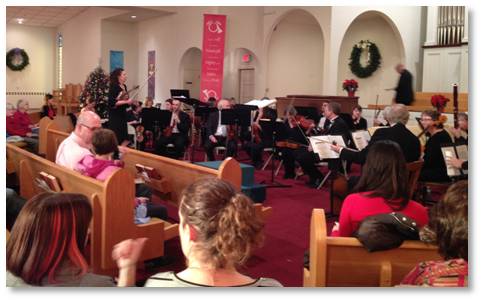 I listened, I followed along in the score and I stood up with the first choral selection, “And the Glory of the Lord.” Next came “O Thou That Tellest Good Tidings to Zion with the Alto soloist, Contralto Emily Marvosh. These all come from Part 1 of “Messiah” which deals with the coming of the Messiah and the virgin birth as predicted in the Old Testament. Then one of my favorites, “For Unto Us a Child is Born” and “Glory to God before launching into the great, “Hallelujah” chorus that concludes Part 1.

After the intermission we went into four choruses from Parts 2 and 3, which cover the passion and death of Jesus Christ. I didn’t know those so I sight read and faked a lot of the long runs of notes that are so typical of Handel’s music. Soprano Soloist Jessica Cooper stood up front and watching her helped me to come in at the right time and to keep my place on the unfamiliar segments.

Standing for the Hallelujah Chorus

Mr. Gazaghian always ended the Christmas Vespers concert with the “Hallelujah: Chorus” and made the audience stand for it, a tradition that is attributed to King George II of England. The king was supposedly so impressed by it that he stood out of respect. When the king stands, of course, everyone stands. Today some do and some don’t but we had no audience and the chorus was standing anyway.

At Somerset High Mr. Gazaghian began his own tradition of inviting all the chorus alumni back to sing along. I did that once and what looked like 200 of us came up to sing. I thought the risers would collapse under the crowd. This year the Vespers concert was also held on Sunday afternoon so I sang with the Mixed Chorus in spirit.

The Messiah Sing was a lot of fun and I hope to do it again next year for Number 42. Maybe I’ll even practice.