In “The Surprising Comeback of Train Travel,” CNN reports that ridership on Amtrak trains is growing rapidly.  After years of decline, trains are regaining some respect.  Traffic congestion and lack of parking play a large part in this trend, particularly for commuters. But part of it is, I hope, driven by the shabby way in which airlines are treating their passengers. Some airline passengers, unhappy with being herded like cattle and seated like cattle (but without the fodder), must be looking for alternatives. 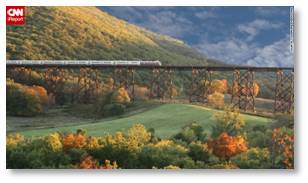 CNN quotes Jim Mathews, the president of National Association of Railroad Passengers: “We let airlines treat us really badly. Whether you have to sleep curled up in a ball because you got bumped from your flight or they lost your luggage along the way, we roll with it. But we don’t let trains do that to us,” he says. And that doesn’t even mention outrageous fees airlines charge for things that used to be free, cramped seats, dirty cabins, lack of food, delayed flights, and surly airline employees.

My husband and I took the Amtrak train to Philadelphia back in 2010 and enjoyed the trip. I loved watching the countryside roll past, showing us views we had never seen from the highway. The only problem was one typical of the East Coast corridor: the old track travels along an antiquated right of way that forces the train to go much too slowly. That meant our trip took far longer than it needed to—and far longer than most people can spare the time for.  If we had high-speed rail in this country, the way they do in Japan and France, I think it would succeed very well, even on routes that are not currently served by rail.

Imagine what a commuter monorail running along the center strip of the 101 freeway through Silicon Valley would do for traffic and congestion. By making the commute both faster and easier, it would also help to alleviate housing prices as workers could spread farther afield to find affordable homes. Imagine being able to take a TGV train from New York to Chicago for far less than the airlines charge for this business-intensive route. The extra time could be spent profitably by working on the train in relative comfort—with a full table to use as a desk and a dining car that provides real food. Imagine, for that matter, being treated not only like a human being but like a valued customer. It’s enough to make one giddy.

Rail still works in the great northwest. Long freight trains snake along remote valleys in British Columbia and the Alaska Railroad’s iconic blue and yellow cars take people (mostly tourists) throughout the southern part of this enormous state. Rail travel can work if we want it to. 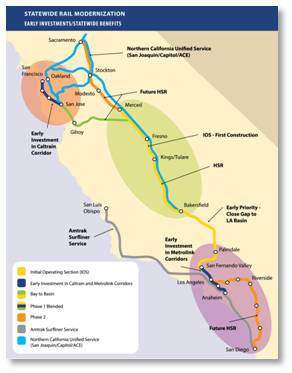 But every time a high-speed rail project arises, the oil industry musters its PR and lobbying forces to kill it.  This is what has been happening recently in California with the proposed high-speed rail link between Los Angeles and San Francisco. Most of the legal obstacles have been cleared, however, and the project is moving ahead as bonds can now be sold.

And people who don’t want “big government” and would rather not pay taxes certainly won’t support an initiative of this kind. Which means new rail projects will likely happen in small increments that won’t be as efficient or cost effective as putting in, say, high-speed rail between New York City and Chicago. Any time private enterprise goes head to head with the government, the corporations are likely to win.

It would be interesting to have a private rail initiative, the way it was done in the nineteenth century, but there are too many hurdles for that to work today.  No longer do we have thousands of miles of empty land across which to stretch the rails. Government’s ability to take land by eminent domain is essential to any new rail project.

Still, where there’s a demand, a supply usually appears. Let’s see whether high-speed rail can generate that demand in 21st century America.